Having made a name for himself with a series of impeccably made but undeniably chilly stories, Austrian filmmaker Michael Haneke changed things up considerably with his last film, “Amour” (2012). The film demonstrated a willingness by Haneke to tell his story in a direct and heartfelt manner without any of the self-reflexive tricks or distancing techniques that he had employed in the past. Having made such a success out of this new approach, some observers have worried that the celebration of a happy Haneke might inspire him to continue on in this vein and leave his boldly bleak narrative style behind for good. Those people can breathe easy, at least for a moment, because one only has to go into his latest effort, “Happy End,” for a couple of minutes to realize that the old Haneke is back with a vengeance.

The film is centered on the Laurents, an upper-class family living in a spacious mansion in Calais consisting of octogenarian patriarch Georges (Jean-Louis Trintignant); daughter Anne (Isabelle Huppert), whom he has put in charge of the family construction business; surgeon son Thomas (Matthieu Kassovitz), who is with his second wife, Anais (Laura Verlinden) and their newborn son); and Anne’s dissolute adult son, Pierre (Franz Rogowski). Their lives may seem elegant on the surface but they all have their problems. Anne is forced to deal with a serious accident at the site that has killed a worker, and which appears to have been caused by Pierre’s negligence. Thomas is carrying on a clandestine affair with a cellist (Loubna Abidar) that we witness via a series of kinky texts and emails. As for Georges, he appears to be in the early stages of dementia and is determined to end it all and spare himself the suffering.

Into this morass comes Eve (Fantine Harduin), who is Thomas’ 13-year-old daughter from his first marriage and who has arrived after her mother ends up in a coma following an overdose of sedatives. She might sound like a figure of pity, but we learn early that she is not exactly innocent through a series a cell phone videos she has shot. They start with her showing her mother going through her evening routine while she talks about how cold and selfish she is and end with footage of her unconscious mother while she sort of admits to having poisoned her. As time passes, Eve discovers a number of family secrets that seem to indicate she may not have strayed too far from the family’s dark side.

Those with any familiarity with the Haneke oeuvre will no doubt recognize similarities with Haneke’s earlier works—there are even a couple of suggestions that this film is supposed to be a sort of semi-sequel to “Amour.” This is not necessarily an outrage by any means—most filmmakers with long and sustained careers tend to focus on certain recurring themes and concepts. The trick, however, is to handle the familiar in a way that makes it seem at least reasonably fresh. By telling the story through the perspective of a number of different characters, there is not the sense, as is sometimes the case with his work, that we are locked into one unyielding viewpoint from the beginning to the almost certainly unpleasant conclusion that he is marching towards.

One thing that “Happy End” does have in common with its predecessors is the high level of quality performances. Of course, to see people like Huppert, Kassovitz and Trintignant (who once again has come out of retirement to work with Haneke) delivering great performances is hardly news—they are among the great French actors, after all. However, the film is pretty much dominated by Fantine Harduin, who is an absolute knockout here as Eve. After watching her in the early scenes, we have her pegged as a monster, but it is at that point that she shifts gears and paints Eve as a confused child who is worthy of our sympathy, while maintaining our fear. Put it this way—this film may have the likes of Huppert and Trintignant in the cast but when Harduin is on the screen, she is the one who draws your attention.

“Happy End” has a few flaws of note—it makes a few attempts to comment on the current refugee situation that don’t really pan out and the relationship between Anne and Pierre feels like a less effective take on the relationship between Huppert and her on-screen son in the great “Elle.” But the talk that this is somehow a failure on Haneke’s part (which was borne out of it failing to secure any prizes at Cannes) is nonsense. His unique take on filmmaking and the world around him is not for everyone, of course, but those on his wavelength should find “Happy End” to be a bracing, sometimes difficult and largely rewarding experience whose title may not be quite as ironic as it may initially seem. 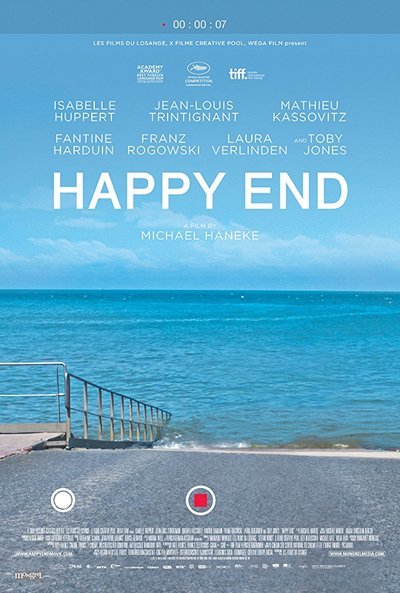