Hank (Andrew Pastides) is handsome, outgoing, and romantic. Asha (Mahira Kakkar) is beautiful, sweet, and vulnerable. Who wouldn't want to watch them get together? James E. Duff’s film about these two immensely likable people starts with a found-footage conceit that holds the potential to deconstruct what we know all too well about the romantic dramedy genre, giving viewers a unique take on a timeless tale. And yet as easy as it is to like Hank and Asha, it’s impossible to look past the many screenwriting and filmmaking flaws of the film about them.

“Hank and Asha” consists of nothing but “video letters” from Hank to Asha and Asha to Hank. Asha lives in Prague, where she sees a film by Hank that she admires. She waits for the post-screening Q&A to meet the man behind the work but he unexpectedly is forced to miss the meet & greet. And so Asha does something that might be slightly outside of her comfort zone: she sends someone she doesn’t know a video introduction. Hank responds from his apartment in New York City. The two rather quickly (almost too much so to be realistic) open up about their lives. Asha criticizes the lack of interior design in Hank’s day-to-day, while Hank is often playful and silly, playing guitar or lip-syncing a dance routine. The two form at least a supportive friendship, and possibly much more if they weren’t separated by thousands of miles. Hank and Asha’s relationship, which never progresses to the Skype stage, goes through many of the ups and downs of a physical one but would have been impossible just a technological generation ago.

The creative potential in the way that the physical development of technology has forever altered love, passion, and romance that Spike Jonze brilliantly mined in "Her" seems like the foundation for a film built on video letters. Which is why the formulaic nature of Duff and Julia Morrison’s script can be so frustrating. The structure of “Hank and Asha” puts us right in the middle of what should be an intimate, personal, organic connection. Hank and Asha are speaking to each other but due to the nature of cinema, they are really speaking directly to the movie audience, conveying fears, concerns, and something at least approaching love. And yet Duff & Morrison waste the opportunity for true emotional connection on contrivance.

The first cinematic element that pushes “Hank and Asha” closer to cliché than reality is a matter of technical polish. Nothing here looks nearly DIY enough. Why is Asha opening a door to the already-on camera? Everything past the first few exchanges has the look of a VH1 music video. It’s too well-framed, well-lit; yes, Hank is a filmmaker and Asha has an artist’s eye, so I can give you that their videos may look better than average but why does she have a better editor than most Slamdance films? And when Duff and Morrison get to the “pop stage”, where they twice give each character a “Coffee House” track to adorn their montages, we’ve reached the point where it feels more like watching a Plain White T’s music video than anything else.

The script starts to reflect (or perhaps influence) the film’s overly polished manner. Why do they so often respond via video message as if they’re talking to each other in conversation when we know they’re not? She reveals something and Hank “responds” with “Whoa. Wow. That’s huge.” as if he hasn’t had hours to think about it before preparing his response. Why not embrace the idea that modern technology would alter the romantic conversation instead of pretending that we’re in the middle of a dinner date? Use the form to put the viewer in a position that doesn't so often feel like a standard third wheel. “Hank and Asha” tries to replicate the dating process through modern technology but fails to comment on how said technology really changes their behavior (or even just to make the case that it doesn’t).

Found footage has been a subgenre often reserved for horror films and yet the worst of them often fall into the same genre traps as their on-film counterparts. The same fate befalls “Hank and Asha,” a film with two genuinely likable characters and performers that can’t avoid the clichés of the genre it could have so easily deconstructed. 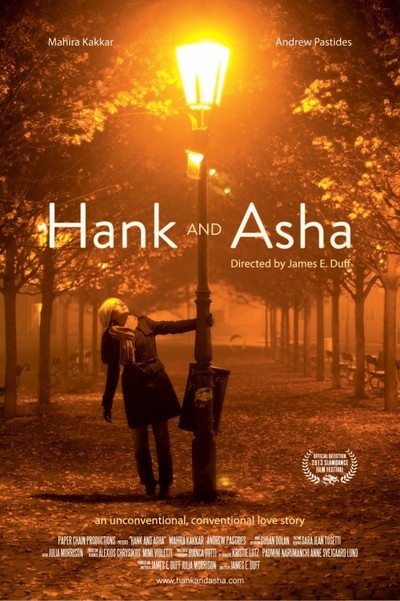