In Abel Ferrara's cult classic vigilante movie "Ms. 45," Zoë Lund's Thana goes on a rampage of revenge in reaction to being raped twice in one day. Thana wreaks havoc on the New York men unfortunate enough to meet her. In one surreal scene, she dresses up as a nun for a Halloween party, and sits in her dank little apartment, posing with her gun in front of the mirror, in a daze of madness and revenge. Blood-red lipstick is smeared all over her mouth, and she lovingly kisses the bullets, all while draped in her nun's habit. The scene is deeply subversive, and provocative in the extreme (then and now), and it illustrates everything that "Habit," a first feature by Janell Shirtcliff, does not accomplish. Like the scene in "Ms. 45," "Habit" riffs on the juxtaposition of nuns and violence, on the humor of seeing nuns wielding guns, or wearing sexy lingerie underneath their habits. "Habit" is "Sister Act" without the humor. The film has eye-catching visuals in its décor and costumes, but it doesn't have a strong point of view, and this is a fatal flaw. "Habit" is provocative without a purpose.

Bella Thorne plays Mads, who hails from Corpus Christi, and has moved to Los Angeles to sell drugs. From a very young age, she fell in love with Jesus, and talks to him casually, updating him on her shenanigans, admitting her sins, but knowing that if anyone will "get it" it will be J.C. Except for one scene near the end, where Thorne is shot from above, lying in a hospital bed with a cross of light on her torso, Thorne never makes Mads' love of Jesus seem real. "Habit" needs you to "buy in" to the whole Jesus thing, because everything depends on it as the movie moves towards the moment when Jesus is revealed. The casting of Paris Jackson sparked controversy when it was announced, and there was a petition started up to halt distribution. None of this gathered any steam. "Habit" is so slight that thinking of it as a threat to Judeo-Christian civilization is absurd.

Once out in Los Angeles, Mads moves in two sisters, Addy (Andreja Pejic) and Evie (Libby Mintz, who also co-wrote the script with Shirtcliff). Hired by a drug dealer named Eric (Gavin Rossdale), the girls go to a high-end nightclub to sell drugs for him. After a debauched night, the girls wake up to find the drug stash as well as the $20,000 they made, vanished. Eric panics. He works for a drug kingpin named Queenie (Josie Ho), who wears a beehive and outfits straight out of a community theatre production of Bye Bye Birdie. Even saying "Queenie" makes Eric tremble in fear. Queenie's sidekick Tuff (Jamie Hince) dresses like Hank Williams in technicolor, and acts as Queenie's "heavy." Mads, Addy and Evie find themselves on the run, with Queenie and Tuff in pursuit. They decide to dress up as nuns for cover.

And that's about it. It's hard to tell what "Habit" wants from us. If the film is trying to provoke or shock, it fails. "Habit" comes off more like a middle-schooler cursing at the dinner table. Sexy girls wearing nun's habits, sexy girls wearing wimples and lingerie, counting their money on a luxurious bed as they do cocaine, doesn't gain any traction, because there's no real sense of the absurd in operation. Instead, it just looks like a David LaChapelle photo shoot, flat and two-dimensional. Imagine "Habit" in the hands of John Waters. That's the energy it needs, that's what it's striving for. (Or maybe it's Tarantino who's the model, with all those specific needle-drops, all those outlandish gangsters and incongruous images.) Josie Ho's grandiose villainous performance is outsized next to the snarky lazy deadpans of the main trio, and Ho may seem "over the top" in comparison, but "over the top" is what is needed.

Shot by Rain Li, "Habit" is sometimes riveting to look at. It's so refreshing to see a film use color so prominently: deep crimsons and blues, the girls' candy-colored go-go boots flashing underneath the black robes, the canary yellows and garish pinks of Ho's outfits (Abigail Keever did the costumes). So many contemporary movies seem afraid of color. Shadows and dishwater-greys and browns predominate, even in movies adapted from comic books. If you go back and watch "Black Narcissus" (another nun story!) or "Meet Me in St. Louis," or any of the films in the Technicolor era, it's almost shocking to see all those vivid lush colors. "Habit" is filled with shining blazing colors, but not much else. 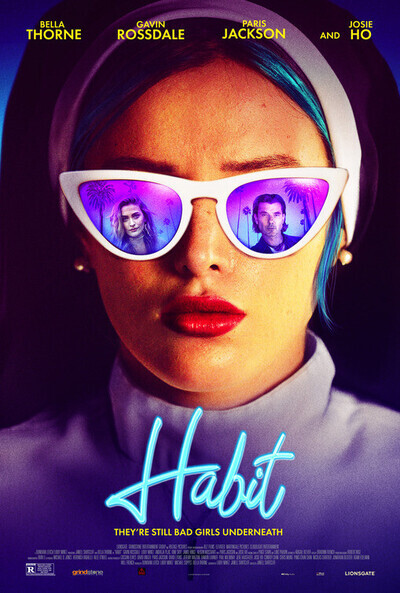