Sam (Karen Gillan) has known only one line of work for as long as she can remember: killing. Like her mother, Scarlet (Lena Headey), before her, Sam has taken on the family business of working as an assassin for a mysterious organization called The Firm. For 15 years, she’s wondered what happened to her mother when she ran away after a series of revenge kills. Her daughter has never forgiven her for the abandonment and being left in the care of Nathan (Paul Giamatti) at the Firm. Now all grown up and working on behalf of the Firm, Sam finds herself in a bit of trouble when bad intel leads to bad decisions, leaving her with a young child, Emily (Chloe Coleman), in her care. Ultimately, Sam turns to the librarians—Florence (Michelle Yeoh), Anna May (Angela Bassett), and Madeleine (Carla Gugino)—a group of women who store weapons in books and who once knew her mother. In a world full of bad men coming to get her, Sam’s going to need all the power old acquaintances can offer.

Part action thriller, part mother-daughter drama, director Navot Papushado’s “Gunpowder Milkshake” sticks to notes both familiar and occasionally entertaining. He creates a world that’s so strange, in both a visually striking sense and one that doesn't always work, that even when a performance sputters out or a line of dialogue rings false, it doesn’t tank the movie. However, that level of spectacle through eye-catching production design and visual style means that sometimes the movie’s vivid colors and bullets outshine the star-studded cast. It seems impossible, considering the murderer’s row of action movie icons, but here it is and there they are, somehow flat and relatively uninteresting. What Papushado and Ehud Lavski’s script lacks, no amount of charisma is able to make up. Instead, the director puts on quite a show with cinematographer Michael Seresin, soaking his movie’s penchant for violence in lurid tones, color-coordinating sets, and lighting to pop off the screen as vividly as possible. The movie’s fight scenes, while choreographically speaking don’t always work for me, are set in some impressive settings, like a neon lit bowling alley (specifically in bisexual lighting, if you’re savvy, but it’s really more a battle of sexes than anything relating to sexuality) or a creatively themed children’s section at a library. These set pieces may not make up entirely for the movie’s duller moments, but they certainly help make the bloated runtime pass fast enough.

Some of those recognizable elements bring to mind the “John Wick” series, in which a trained assassin navigates between coordinated attacks and a neutral ground where shots shouldn’t be fired—the Diner in “Gunpowder Milkshake” is very similar to the Continental in those Keanu Reeves movies. Like Reeves, it seems like Gillian is also creating a stoic loner with tight lips and a bad attitude, but she doesn’t quite strike the right note for Sam. Instead, she comes across as uncharacteristically uncharismatic. The world of “Gunpowder Milkshake” is also a much more ridiculous one than the Wick series, and it demands a higher suspension of disbelief during a moment when a mortally wounded character continues to fight beyond physical limits or Sam’s ability to never really be affected by almost any injury. Although gun-toting librarians may sound like a cool concept, the actresses behind them never really get to showcase their skills until a climactic fight, and we must watch them muddle through some pretty rough dialogue to get there first. However, it's perhaps a little Easter egg that the librarians are decked out in the colors of the fairies of Disney’s “Sleeping Beauty”—red, blue and green—and act like deadly godmothers giving the gifts of bullets, guns, and other weapons. Gillian’s co-star, Coleman, comes across as the much stronger actress among the crew, playing both a wide-eyed observer to this new violent world and a quick-thinking resourceful child ready to help Sam.

In a looser sense, “Gunpowder Milkshake” also shares some similarities to Marvel’s “Black Widow.” Both present a girl-powered feminism but only through the path of violence. To excel in these worlds, the women must be deadlier than the men. The men around our heroines are at best inept, at worst, actually villainous, a kind of condescending simplicity that takes away our heroines’ right to a fight with her equals. There’s also a multi-generational aspect and mother-daughter elements to both sagas. The movies serve as a strange half-empowerment message, as neither story has much time to think through the implications of training young girls into killers, but only briefly considers their trauma as the price of becoming powerful murder machines. It’s kind of a shame that both movies want to deal with the feminine experience and briefly touch on sensitive topics like motherhood and family, but only at a surface level for the sake of mediocre fight scenes and stilted leading roles for its stars.

Now playing on Netflix and in select theaters.

Paranormal Activity: Next of Kin 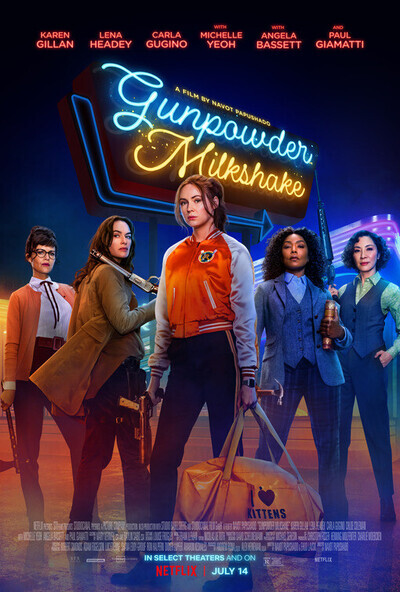 Rated R for strong bloody violence throughout and language.

Angela Bassett as Anna May