John Ridley is an Oscar-winning screenwriter with an Achilles’ heel. When he made his directorial debut about Jimi Hendrix, he chose to orchestrate “Jimi: All is By My Side” without the rights to Hendrix’s music, or even a lead actor who could fake one-fifth of Hendrix’s ability. Perhaps he stubbornly thought that people wouldn’t notice or care, but about ten minutes into that film, they did. This self-destructive way of trying to treat history in a self-designated vacuum hits a new low with “Guerrilla,” an intriguing but inherently flawed miniseries on Showtime from Ridley that sees him taking on the British Black Panther movement but leaving out a representation of its vital force—the black women like Althea Jones-Lecointe, who led the revolution in December 1968. Aside from the obvious offensiveness of writing these people out of their history, it is further harmful given how “Guerrilla” focuses on a piece of activist history that does not have many narrative or documentary stories before it, and will have to further await its fair due.

But while it should not be taken as historical text (nor does it claim to ever be “Based on True Events”) “Guerrilla” is a relatively engaging mini-series about the people who fuel, and are affected by, a revolution. If do you choose to watch it, I found that engaging it with the same mindset of viewing Quentin Tarantino's “Inglorious Basterds”—revisionist history motivated by genre and an era’s aesthetics more than the actual characters or results—allowed a productive context. Created by a writer with a clear gift for storytelling and giving his characters interesting things to talk about, “Guerrilla” engineers a considerable amount of tension out of its discourse, in which fictional characters encounter very human ideas of what is right and wrong when trying to change the world.

“Guerrilla” takes place in London in 1971, with racial inequality at a boiling point. After a peaceful protest against white nationalists is manipulated by police to become a violent riot (captured with stunning visuals, often without dialogue), Indian-born activist Jas (Freida Pinto) and her lover, the son of Nigerian immigrants Marcus (Babou Ceesay) decide to break out their friend Dhari (Nathaniel Martello-White), who is in jail for a petty crime but has been cultivating an audience speaking about the need for revolution against the white man. With just a gun, a police baton and some broken glass, they break Dhari out from custody and go on the run, ready to create more revolutionary acts while their elusiveness to authorities gives even more power to their movement.

By the start of the episode two, the series solidifies itself as an electric tale about the creation of an underground revolution, going into the step-by-step process of its growth and the endless debate between its participants of how to do it most effectively (broadcasts? bombs?). After hiding out for so long, Jas, Dhari and Marcus have to find money for their next acts and general survival, while coming to terms with what the violence they are creating (like Ceesy's horrified face when he shoots a man) and the moral sacrifices they have to make. Ceesy and Pinto in particular both intricately display how their passion for activism forms them into possible monsters, putting “Guerrilla” into a thrilling gray area in which you are rooting with people whose values you believe in, but not so much their violent tactics to achieve such. Meanwhile, there’s an ongoing debate introduced by a character named Kent, (Idris Elba, not on screen too often but using that incredible “Beasts of No Nation” power when he is) who runs against the “hooligans” and their violent cause by trying to reach the white masses with the same ideas of equality through charisma and peace. On top of this, the police are on their tail, lead by Chief Inspector Pence (Rory Kinnear) a merciless figure of police authority who works the Black Power desk at Scotland Yard.

“Guerrilla” is a series that fluctuates significantly with its energy, and even ends on a considerably less exciting note despite all that it is built from. At its best the series can be focused where every scene feels like it matters and is pushing the story at a great speed just through dialogue; in a few too many low-points, “Guerrilla” displays a narrative gluttony using characters who are ultimately secondary to the revolution. A friend of Jas and Marcus named Fallon (Denise Gough) is caught up with personal connections to Chief Inspector Pence, who has his own relationships with a conflicted informant named Kenya named Kenya (Wunmi Mosaku). This other half of the show’s attention distracts from the energy created by the armed activists, resembling bloated family tales despite the solid performances all around.

But even when the series loses that contemplative edge found in the story of Jas, Dhari and Marcus, “Guerrilla” always has a special energy from its cinematography and editing. Wide-angle lenses elevate the feel of the enterprise just enough, while a consistent use of negative space lets grimy hideouts or empty police offices speak as expressively as the characters who only take up so much of the frame. Best of all, “Guerrilla” shows how performance and economic camerawork can get significant mileage with pacing, as numerous tense exchanges unfold with a camera focused closely on a character’s face, while they anxiously listen and then react. This prevalent confidence in filmmaking and performance can’t be underestimated, especially as most of “Guerrilla’”s effective moments take place during power struggles of words between two characters.

That very flair doesn’t come into its overall story, which is inspired initially with a pilot that offers a terrifying, timely depiction of police brutality and a sharp getaway scene. Though it does have more powerful moments throughout, the series eventually becomes constrained by its interest to create a great fictional drama out of a true setting, going with screenwriter tricks like withholding information from the viewers to create big surprises later or connecting every key figure; "Guerrilla" doesn't feel much like a revolution itself. In the end, Ridley’s contributions prove less fascinating than the true story—and people—he is trying to replace. 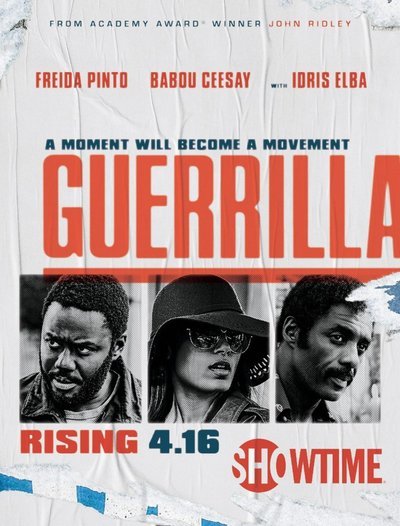