Instead of lining up to be hot lunch for the killer fish that relentlessly pursues them, perhaps the central five in “Great White” should have retained a wisdom or two from “Jaws.” Alas, “This shark, swallow you whole” is something they learn the hard way in Martin Wilson’s limp survival flick that drags considerably more than it scares.

What will likely be one of the more boring offerings of this year’s Shark Week, “Great White” starts with the kind of prologue that makes one wonder in the aftermath, why the rest of the film could not live up to its nail-biter opening. In those economically written and shot few minutes, we follow a love-struck young couple as they fall victim to the sharp teeth of a voracious great white and paint the turquoise Australian waters they swim and take selfies in bright red. Elsewhere, another pair of smitten romantic partners—marine biologist Charlie (Aaron Jakubenko) and his ocean savvy girlfriend Kaz (Katrina Bowden)—seems to be having troubles, too, but of the more earthbound kind. Trying to make ends meet by flying rich folk to remote areas of the ocean and offering aquatic experiences like snorkeling, the mutually caring duo get introduced to us in deep conversation about their financial hardship when an unexpected phone call arrives from a well-heeled married couple interested in their excursion services. The inquirers are Joji (Tim Kano) and Michelle (Kimie Tsukakoshi), who hire Kaz and Charlie to fly them to a picturesque cove, a locale that's important to Michelle because of her proud family history.

Before we can say “you’re gonna need a bigger boat”—or rather, a bigger seaplane in this case—they hop aboard along with Benny (Te Kohe Tuhaka), Kaz, and Charlie’s good friend and charter chef tasked to feed the customers. But problems arise soon enough amongst the group, which is quite possibly (and regrettably) the most beautiful quintet of people ever served up at an open-water shark buffet. For a contrived reason or two that “Great White” never bothers to engage with, Joji and Benny lock heads with each other quickly in an overwrought moment, caused and escalated by Joji. Things worsen from there on out, when the clan discovers the remains of one of victims from the opening sequence and puzzlingly enough, decide to look for the other person instead of doing something more logical like call the authorities for help. A former shark attack survivor and scientist who should know better, Charlie especially gets shortchanged by Michael Boughen’s lethargic script by making one clueless decision after another.

A sunken plane, a lost oar, stormy waters, legs dangling in water like skewered meat, and a triangular fin ruthlessly circling the unit’s inflatable raft are predictable elements in “Great White,” which unsuccessfully tries to pay lip service to environmentalism and rising ocean temperatures. But unlike, say, “The Shallows,” a modern-day summer banger that knew exactly how to make use of its limited resources for maximum impact, this shark film fails to milk the assets at its disposal for their worth, unable to maintain the tension whenever the CGI monster makes a well-announced entrance. Perhaps Wilson would have benefitted from the subtle method of “Jaws,” or even “The Reef,” by prioritizing teasing over showing. But here, the shark’s frequent appearances and unrealistic looks lessen the impact of the fear it’s supposed to spread, despite some truly unnerving camerawork by Tony O’Loughlan. Towards the end, after some of the bodies get devoured in the most expected order, “We can’t give up! We have to keep trying,” one character says to another. It’s shocking how much you will wish for them to just give in. If only.

Now playing in theaters and available on demand and on digital platforms. 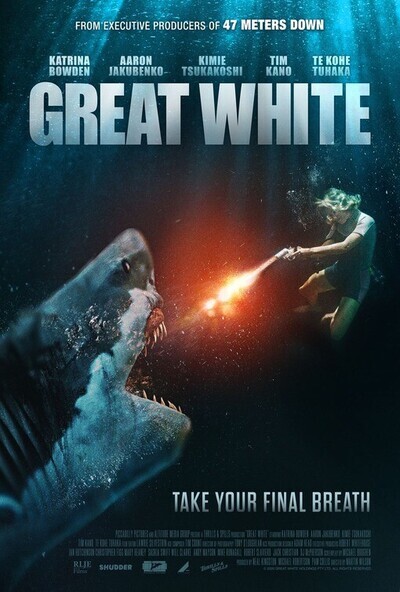