You mustn't make fun of the gentleman, Clifford. You'd like to have a nose like that full of nickels, wouldn't you?

-- Mother to son about Egbert Sousé

W. C. Fields is the most improbable star in the first century of the movies, a man widely (and accurately) thought to be drunk during most of his adult life, who created a screen character that hated women, children and dogs and could not be redeemed even by the requirements of the Hollywood censors. During Fields' career, industry standards required good to be rewarded and evildoing punished, but in "The Bank Dick" Fields plays an alcoholic misanthrope who lies, cheats and steals and is rewarded with wealth and fame.

"The Bank Dick" (1940) is probably Fields' best film, but his career resides not so much in individual films as in scenes and moments scattered here and there between his first short subject, in 1915, and his last films in the mid-1940s. He recycled material tirelessly. Bits from his vaudeville act were being dusted off 40 years later, and he always played more or less the same character. Even as Mr. Micawber in "David Copperfield" (1935), his most disciplined and polished performance, he was recognizably himself in costume (or, it could be argued, Micawber was simply an earlier fictional version of Fields).

Today Fields (1880-1946) is not as well known as he once was. Even his revival in the 1960s has been forgotten. No doubt the wheel of memory will revolve to bring him back into fashion, because his appeal is timeless: It is the appeal of the man who cheerfully embraces a life of antisocial hedonism, basking in serene contentment with his own flaws. He is self-contained.

Fields was an accomplished juggler as a youth on the vaudeville stage, and seems to have come into his screen persona gradually, helped by the introduction of sound, which permitted audiences to hear his peculiar nasal twang. As a comedian, he had unusual timing: His dialogue does not end in punch lines that invite laughter, but trails off into implications and insinuations of things better left unsaid. Audiences suspected he was sneaking double meanings past the censors, and they were right.

Legend has it he wanted his tombstone to read"On the whole, I'd rather be in Philadelphia."During his lifetime, on the whole, he'd rather be in a bar. He was a serious drinker who was often under a doctor's care, checked into sanitariums between movies and died a horrible alcoholic's death. David Thomson has written of "the mottling of his sad face. "

That he nevertheless brought exquisite timing to his performances and joy to his audiences exhibits a species of courage, and of course on the days when the booze was working he could be playful and entertaining; his Hollywood parties were eagerly attended even if the host was seldom conscious at their conclusion.

"I knew Fields well," Groucho Marx told me in 1972. "He used to sit in the bushes in front of his house with a BB gun and shoot at people. Today he'd probably be arrested. He invited me over to his house. He had a girlfriend there. I think her name was Carlotta Monti.Car-lot-ta MON-ti!That's the kind of a name a girl of Fields would have. He had a ladder leading up to his attic. Without exaggeration, there was $50,000 in liquor up there. Crated up like a wharf. I'm standing there and Fields is standing there, and nobody says anything. The silence is oppressive. Finally he speaks:This will carry me 25 years."

Stories like that were well known to Fields' fans, and contributed to the legend that drew crowds to his movies. He also became famous for a long-running feud with Charlie McCarthy, the dummy of the ventriloquist Edgar Bergen and for onscreen hostility to small children, who were hostile right back at him. "Shall I bounce a rock off his head?" asks Elsie, his daughter in "The Bank Dick," and her mother tells her, "Respect your father, darling. What kind of a rock?"

Fields was paid $125,000 a picture in his later years, a good salary, and insisted on another $15,000 for his "screenplays," which consisted of mental notes and scrawlings on the backs of envelopes. The synopsis of any of his films is hallucinatory. My source is his biographer, Robert Lewis Taylor, who writes that "My Little Chickadee" (1940) and "Never Give a Sucker an Even Break" (1941), two of his best-known films, "will probably stand up among the worst movies ever made," but tellingly adds: "This scarcely detracts from their overall worth."

You didn't go for a good movie. You went for Fields, and for the surrealism of his plots. Consider "The Bank Dick," which in he plays a man named Egbert Sousé ("accent grave upon the e") -- an unhappily married drunk who accidentally catches a thief, is rewarded with a job at the bank and falls in with a con man.

At one point he wanders into his favorite bar, the Black Pussy Cat (bartender: Shemp Howard), and meets a movie producer who hires him on the spot to fill in for A. Pismo Clam, the director of a movie being made in town. Fields arrives on the set, announces that the story will switch from an English drawing room drama to a circus picture, and begins to instruct the actors for a football scrimmage. The male lead is very tall, the female lead very short ("Is she standing in a hole?") and after several funny minutes Fields simply walks off the set, and the directing job is never referred to again until a chase scene at the end of the film.

This kind of abrupt disconnect is common in Fields movies. Even a Marx Brothers plot was a masterpiece of construction by comparison. One sketch segues into another one, not seamlessly, and no effort is made at realism. (In his famous short "The Fatal Glass of Beer," he repeatedly looks out a cabin door, intones "It's not a fit night out for man nor beast," and is hit in the face with what is obviously a handful of soap flakes hurled from just out of sight.)

Assimilating the unique fact of W.C. Fields is a lifelong occupation for any filmgoer, conducted from time to time according to no particular plan. There is not a single Fields film that "must" be seen in order to qualify as a literate movie lover, and yet if you are not eventually familiar with Fields you are not a movie lover at all. What is amazing about him is that he exists at all. He is not lovely, and although he is graceful it is a lugubrious grace, a kind of balance in a high psychic wind. All of his scenes depend, in one way or another, on sharing his private state: He is unloved, he detests life, he is hung over, he wants a drink, he is startled by sudden movements and loud noises, he has no patience for fools, everyone is a fool, and middle-class morality is a conspiracy against the man who wants to find surcease in alcoholic bliss. These are not the feelings of his characters; they are his own feelings.

Fields met his match in "My Little Chickadee" when he co-starred with Mae West, another Hollywood force of nature. They wrote their scenes separately, we learn. She could not stand his drinking, Taylor reports, and although Fields at 60 was far from West's usual muscle builder type, he grew boozily enamored of her, at one point fondly referring to her off-camera as "my little broodmare." Pauline Kael finds "Chickadee" "a classic among bad movies," observing that it never really gets off the ground, "but the ground is such an honest mixture of dirt, manure and corn that at times it is fairly aromatic." Only Fields would compliment a woman, after kissing her hand, by observing, "What symmetrical digits!" Only West would have been able to look complimented. 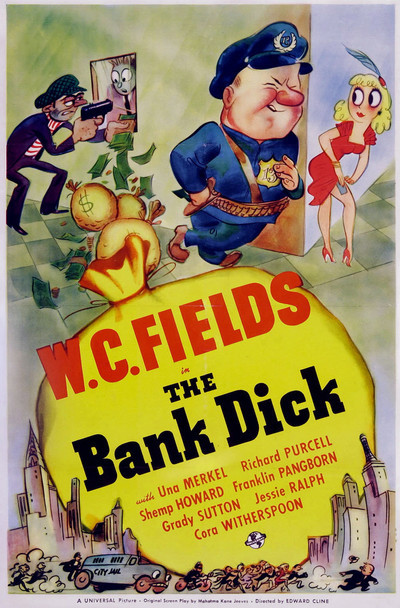