Alfred Hitchcock's “Notorious” is the most elegant expression of the master's visual style, just as “Vertigo” is the fullest expression of his obsessions. It contains some of the most effective camera shots in his--or anyone’s--work, and they all lead to the great final passages in which two men find out how very wrong they both were.

This is the film, with “Casablanca,” that assures Ingrid Bergman’s immortality. She plays a woman whose notorious reputation encourages U.S. agents to recruit her to spy on Nazis in postwar Rio. And that reputation nearly gets her killed, when the man she loves mistrusts her. His misunderstanding is at the center of a plot in which all of the pieces come together with perfect precision, so that two people walk down a staircase to their freedom, and a third person climbs steps to his doom.

Hitchcock made the film in 1946, when the war was over but the Cold War was just beginning. A few months later, he would have made the villains Communists, but as he and Ben Hecht worked on the script, Nazis were still uppermost in their minds. (An opening subtitle says: “Miami, Florida, 3:20 p.m., April 20, 1946”--admirably specific, but as unnecessary as the similarly detailed information at the beginning of “Psycho.")

The story stars Bergman as a patriotic American named Alicia Huberman, whose father is a convicted Nazi spy. Alicia is known for drinking and apparent promiscuity, and is recruited by an agent named Devlin (Cary Grant) to fly to Rio and insinuate herself into the household of a spy ring led by Sebastian (Claude Rains). Sebastian once loved her, and perhaps he still does; Devlin is essentially asking her to share the spy's bed to discover his secrets. And this she is willing to do, because by the time he asks her, she is in love--with Devlin.

All of these sexual arrangements are of course handled with the sort of subtle dialogue and innuendo that Hollywood used to get around the production code. There is never a moment when improper behavior is actually stated or shown, but the film leaves no doubt. By the time all of the pieces are in place, we actually feel more sympathy for Sebastian than for Devlin. He may be a spy but he loves Alicia sincerely, while Devlin may be an American agent but has used Alicia's love to force her into the arms of another man.

Hitchcock was known for his attention to visual details. He drew storyboards of every scene before shooting it, and slyly plays against Grant’s star power in the scene introducing Devlin to the movie. At a party the night her father has been convicted, Alicia drinks to forget. The camera positions itself behind the seated Devlin, so we see only the back of his head. He anchors the shot as the camera moves left and right, following the morally ambiguous Alicia as she flirts, drinks and tries to forget.

There are more famous shots the next morning. Alicia awakens with a hangover, and there is a gigantic foreground closeup of a glass of Alka-Seltzer (it will be paired much later in the movie with a huge foreground coffee cup that we know contains arsenic). From her point of view, she sees Devlin in the doorway, backlit and upside down. As she sits up, he rotates 180degrees. He suggests a spy deal. She refuses, talking of her plans to take a cruise. He plays a secret recording that proves she is, after all, patriotic--despite her loose image. As the recording begins, she is in shadow. As it continues, she is in bars of light. As it ends, she is in full light. Hitchcock has choreographed the visuals so that they precisely reflect what is happening.

The film is rich with other elegant shots, the most famous beginning with the camera on a landing high above the entrance hall of Sebastian’s mansion in Rio. It ends, after one unbroken movement, with a closeup of a key in Alicia's nervously twisting hand. The key will open the wine cellar, where Devlin (posing as a guest) will join Alicia in trying to find Sebastian’s secret. One of the bottles contains not wine but a radioactive substance used in bombs. Of course, it could contain anything--maps, codes, diamonds--because it is a MacGuffin (Hitchcock's name for that plot element that everyone is concerned about, although it hardly matters what it is).

The Hecht screenplay is ingenious in playing the two men against one another. Sebastian, played by Rains, is smaller, more elegant, more vulnerable, and dominated by his forbidding mother (Leopoldine Konstantin). Devlin, played by Grant, is tall, physically imposing, crude at times, suspicious where Sebastian is trusting. Both men love her but the wrong man trusts her, and the plot leads to a moment of inspired ingenuity in which Devlin is able to escort Alicia out of the Nazi mansion in full view of all of the spies, and the circumstances are such that nobody can stop him. (There is a point earlier in the film where Devlin walks up the same staircase, and if you count his steps you will find that on the way down he and Alicia descend more steps than there actually are--Hitchcock's way of prolonging the suspense.)

Throughout Hitchcock's career, he devised stories in which elegant women, usually blond, were manipulated into situations of great danger. Hitchcock was the master manipulator, with the male actors as his surrogates. “Vertigo” treats this theme so openly it almost gives the game away. But look how it works in “Notorious,” where Devlin (like the Jimmy Stewart character in “Vertigo”) grooms and trains innocent women to be exactly who he desires her to be, and then makes her do his bidding.

The great erotic moment in “Vertigo” is the one where the man kisses the woman of his fantasy, while the room whirls around him. There is a parallel scene in “Notorious,” and it was famous at the time as “the longest kiss in the history of the movies.” It was not, however, a single kiss, as Tim Dirks points out in his essay on the film (www.filmsite.org/noto.html). The production code forbade a kiss lasting longer than three seconds, and so Bergman and Grant alternate kissing with dialogue and eyeplay, while never leaving one another's arms. The sequence begins on a balcony overlooking Rio, encompasses a telephone call and a discussion of the dinner menu, and ends with a parting at the apartment door, taking three minutes in all. The three-second rule led to a better scene; an actual180-second kiss might look like an exercise in slobbering.

The choice of Ingrid Bergman for the role was ideal; she subtly combined the noble and the carnal. Consider “Casablanca” (all of the viewers of “Notorious” would have), in which she lives with a resistance hero but in her heart loves a scruffy bar owner, and yet emerges as an idealistic heroine. In “Notorious,” we never seriously doubt that she is the heroine, but we can understand why the Grant character does. She appears to be a dipsomaniac, and besides, she sleeps with Sebastian. But she does it because she loves Devlin. Devlin has difficulty in loving a woman who would do that; one is reminded of Groucho Marx, who refused to join any club that would have him as a member.

So many movies have ended in obligatory chases and shoot-outs that the ability to write a well-crafted third act has almost died out. Among its many achievements, “Notorious” ends well. Like clockwork, the inevitable events of the last 10 minutes take place, and they all lead to the final perfect shot, in which another Nazi says to Sebastian, “Alex, will you come in, please? I wish to talk to you.” And Alex goes in, knowing he will never come out alive. 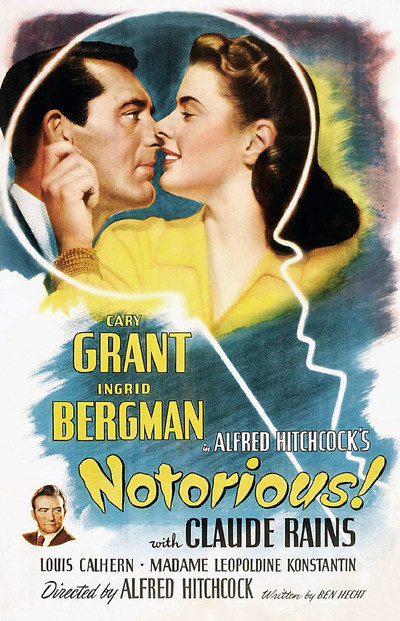