Cabiria's eyebrows are straight, black horizontal lines, sketched above her eyes like a cartoon character's. Her shrug, her walk, her way of making a face, all suggest a performance. Of course a prostitute is always acting in one way or another, but Cabiria seems to have a character in mind--perhaps Chaplin's Little Tramp, with a touch of Lucille Ball, who must have been on Italian TV in the 1950s. It's as if Cabiria thinks she can waltz untouched through the horrors of her world, if she shields herself with a comic persona.

Or perhaps this actually is Cabiria and not a performance: Perhaps she is a waiflike innocent, a saint among the sinners. It is one of the pleasures of Giulietta Masina's performance that the guard never comes down. As artificial as Cabiria's behavior sometimes seems, it always seems her own, and this little woman carries herself proudly through the gutters of Rome.

“Nights of Cabiria,” directed by Masina's husband, Federico Fellini, in 1957, won her the best actress award at Cannes, and the film won the Oscar for best foreign picture--his second in a row, after “La Strada” in 1956 (he also won for “8 1/2” in 1963 and “Amarcord” in 1974). Strange, then, that it is one of Fellini's least-known works--so unfamiliar that he was able to recycle a lot of the same underlying material in “La Dolce Vita” only three years later.

Now the movie has been re-released in a restored 35-mm. print, with retranslated, bolder subtitles giving a better idea of the dialogue by Pier Paolo Pasolini. There is also a 7 1/2-minute scene that was suppressed in earlier versions of the film.

Seeing it in its new glory, with a score by Fellini's beloved composer Nina Rota, “Nights of Cabiria” plays like a plucky collaboration on an adult theme between Fellini and Chaplin. Masina deliberately based her Cabiria on the Little Tramp, I think--most obviously with some business with an umbrella, and a struggle with the curtains in a nightclub. But while Chaplin's character inhabited a world of stock villains and happy endings, Cabiria survives at the low end of Rome's prostitution trade. When she's picked up by a famous actor and he asks her if she works the Via Veneto, the center of Rome's glitz, she replies matter-of-factly that, no, she prefers the Archeological Passage, because she can commute there on the subway.

Cabiria is a working girl. Not a sentimentalized one, as in “Sweet Charity,” the Broadway musical and movie based on this story, but a tough cookie who climbs into truck cabs, gets in fights and hides in the bushes during police raids. She's proud to own her own house--a tiny shack in an industrial wasteland--and she dreams of sooner or later finding true romance, but her taste in men is dangerous, it's so trusting; the movie opens with her current lover and pimp stealing her purse and shoving her into the river to drown.

By the nature of their work prostitutes can find themselves almost anywhere in a city, in almost any circle, on a given night. She's admitted to the nightclub, for example, under the sponsorship of the movie star (Alberto Lazzari). He picks her up after a fight with his fiancee, takes her to his palatial villa, and then hides her in the bathroom when the fiancee turns up unexpectedly (Cabiria spends the night with his dog). Later, seeking some kind of redemption, she joins another girl and a pimp on a visit to a reputed appearance by the Virgin Mary. And in the scene cut from the movie, she accompanies a good samaritan as he visits the homeless with food and gifts (she is shocked to see a once-beautiful hooker crawl from a hole in the ground).

All of these scenes are echoed in one way or another in “La Dolce Vita,” which sees some of the same terrain through the eyes of a gossip columnist (Marcello Mastroianni) instead of a prostitute. In both films, a hooker peeps through a door as a would-be client makes love with his mistress. Both have nightclub scenes opening with exotic ethnic dancers. Both have a bogus appearance by the Virgin. Both have a musical sequence set in an outdoor nightclub. And both have, as almost all Fellini movies have, a buxom slattern, a stone house by the sea, a procession and a scaffold seen outlined against the dawn. These must be personal touchstones of his imagination.

Fellini was a poet of words and music. He never recorded the dialogue at the time he shot his films. Like most Italian directors, he dubbed the words in later. On his sets, he played music during almost every scene, and you can sense in most Fellini movies a certain sway in the way the characters walk: Even the background extras seem to be hearing the same rhythm. Cabiria hears it, but often walks in counterpoint, as if to her own melody. She is a stubborn sentimentalist who cannot believe the man she loved--the man she would do anything for--would try to drown her for 40,000 lira. (“They'd do it for 5,000,” her neighbor assures her.)

She is a woman seeking redemption, a woman who works as a sinner but seeks inner spirituality. One night she happens into a performance by a hypnotist, is called onstage, and in the film's most extraordinary sequence is placed in a trance (half vaudeville, half enchanted fantasy) in which she reveals her trust and sweetness. She also informs the rude audience that she has a house and a bank account.

A man named Oscar (Francois Perier) sees her on the stage and begins to court her with flowers and quiet sincerity. He is touched by her innocence and goodness, he says, and she believes him. At last she has found a man she can trust, to spend her whole life with. She is filled with joy, even as her friends (and we in the audience) despair of her naivete.

Fellini's roots as a filmmaker are in the postwar Italian Neorealist movement (he worked for Rossellini on “Open City” in 1945), and his early films have a grittiness that is gradually replaced by the dazzling phantasms of the later ones. “Nights of Cabiria” is transitional; it points toward the visual freedom of “La Dolce Vita” while still remaining attentive to the real world of postwar Rome. The scene involving the good samaritan provides a framework to show people living in city caves and under bridges, but even more touching is the scene where Cabiria turns over the keys of her house to the large and desperately poor family that has purchased it.

These scenes provide an anchor, an undertow, that lends a context to the lighter scenes, like the one where she is mocked by two Via Veneto prostitutes who are more elegant (and much taller) than she is. Or the scene where she drives away in the actor's big American car while flaunting her new client to her rival prostitutes (again, a scene Fellini would recycle in “La Dolce Vita”). In all of those scenes she remains in defiant character, and then we sense a certain softening toward the end. As she allows herself to believe that her future lies with Oscar, her eyebrows subtly soften their bold horizontal slashes, and begin to curve above eyes and a face that seem more vulnerable. It's all in preparation for the film's unforgettable last shot, in which we see Cabiria's face in all its indomitable resolve.

Of all his characters, Fellini once said, Cabiria was the only one he was still worried about. In 1992, when Fellini was given an honorary career Oscar, he looked down from the podium to Masina sitting in the front row and told her not to cry. The camera cut to her face, showing her smiling bravely through her tears, and there was Cabiria. 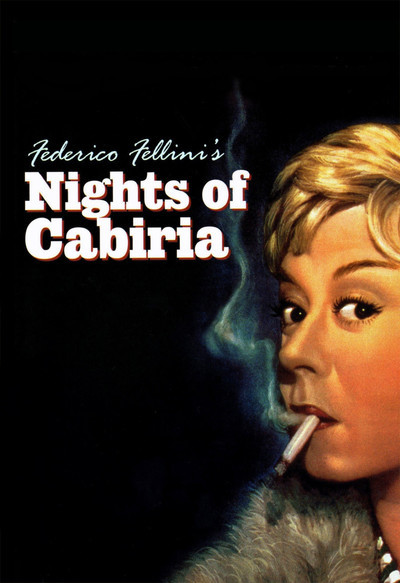 Franca Marzi as Wanda, her friend