All discussions of Marcel Carne's Children of Paradise begin with the miracle of its making. Named at Cannes as the greatest French film of all time, costing more than any French film before it, Les Enfants du Paradis was shot in Paris and Nice during the Nazi occupation and released in 1945. Its sets sometimes had to be moved between the two cities. Its designer and composer, Jews sought by the Nazis, worked from hiding. Carne was forced to hire pro-Nazi collaborators as extras; they did not suspect they were working next to resistance fighters. The Nazis banned all films over about 90 minutes in length, so Carne simply made two films, confident he could show them together after the war was over. The film opened in Paris right after the liberation, and ran for 54 weeks. It is said to play somewhere in Paris every day.

That this film, wicked, worldly, flamboyant, set in Paris in 1828, could have been imagined under those circumstances is astonishing. That the production, with all of its costumes, carriages, theaters, mansions, crowded streets and rude rooming houses, could have been mounted at that time seems logistically impossible (It is said, wrote Pauline Kael, that the starving extras made away with some of the banquets before they could be photographed). Carne was the leading French director of the decade 1935-1945, but to make this ambitious costume film during wartime required more than clout; it required reckless courage.

Despite the fame of Children of Paradise, most of the available prints are worn and dim. It used to play every New Years' Day at Chicago's beloved Clark Theater, and that's where I first saw it, in 1967, but the 1991 laserdisc was of disappointing quality, and videotapes even worse. Now the film has been released in sparkling clarity on a Criterion DVD that begins with a restored Pathe 35mm print and employs digital technology to make the blips, dirt and scratches disappear. It is likely the film has not looked better since its premiere. There are formidably informative commentary tracks by Brian Stonehill and Charles Affron.

The film's original trailer (on the disc) calls Children of Paradise the French answer to Gone With the Wind. In its scope and its heedless heroine, there is a similarity, but the movie is not a historical epic but a sophisticated, cynical portrait of actors, murderers, swindlers, pickpockets, prostitutes, impresarios and the decadent rich. Many of the characters are based on real people, as is its milieu of nightclubs, dives and dens, theaters high and low, and the hiding places of the unsavory.

Carne plunges us directly into this world with his famous opening shot on the Boulevard of Crime, which rivals the street of dying men scene in GWTW, reaching seemingly to infinity, alive with activity, jammed with countless extras. This was a set designed by the great art director Alexander Trauner, working secretly; the credits list his contribution as clandestine. To force the perspective and fool the eye, he used buildings that fell off rapidly in height, and miniature carriages driven by dwarves. The street is a riot of low-life. Mimes, jugglers, animal acts and dancers provide previews outside their theaters, to lure crowds inside. One of the first attractions we see is advertised as Truth. This is the elegant courtesan Garance, who revolves slowly in a tub of water, regarding herself naked in a mirror. The water conceals her body, so that she supplies truth, but only from the neck up. This is also what she supplies in life.

Garance is played by Arletty (1898-1992), born as Leonie Bathiat, who became a star in the 1930s and was, truth to tell, a little old to play a sexual temptress who mesmerizes men. Like Marlene Dietrich, to whom she was often compared, Arletty's appeal was based not on fresh ripeness but on a tantalizing sophistication. What fascinates men is that she has seen it all, done it all, admits it, takes their measure, and yet flatters them that she adores them. Even cutthroats fall under her spell; when the criminal Lacenaire tells her I'd spill torrents of blood to give you rivers of diamonds she looks him in the eye and replies, I'd settle for less.

Around Garance circle many of the movie's most important characters. The mime Baptiste (Jean-Louis Barrault) sees her from her stage, defends her in pantomime against a pickpocket charge, is rewarded by a rose, and falls for her. So does Frederick Lemaitre (Pierre Brasseur), as an actor who dreams of doing something good--perhaps Shakespeare. And Lacenaire (Marcel Herrand), who with his ruffled shirt, curly hair, villain's mustache and cold speech is the Rhett Butler of the piece. And the Count Edouard de Montray (Louis Salou), who thinks he has brought her but discovers he was only renting.

It is possible that Garance truly loves the innocent Baptiste, who triumphs in a bar brawl and brings her home to his rude rooming house, where he rents her a room of her own and retires separately for the night. But Frederick, who lives in the rooming house, has no such scruples--and, for that matter, Baptiste is no saint. He marries the theater manager's daughter, sires an abominable offspring, in the words of Pauline Kael, and cheats on his wife by still loving Garance. Lacenaire, who strides through the underworld like a king, basking in his reputation for ruthlessness, thinks he can have Garance for the asking (you are the only woman for whom I do not have contempt), but it is the Count whose money makes her his mistress. When Lacenaire pulls back a drapery so that the Count can see Garance in the arms of Frederick, so many men think they have the right to her that the actor observes, Jealousy belongs to all if a woman belongs to none.

Most of the movie is frankly shot on sets, including exteriors. A misty dawn scene involving a duel provides a rare excursion outside Paris. He had an eye for the sad romance of fog-laden streets and squalid lodging houses, David Thomson writes. His characters live artificially in the demimonde, actors who are always on stage; if we meet a street beggar, like the blind man Fil de Soie (Gaston Modot), we are not much surprised to find he can see well enough indoors.

Carne's screenplay was by his usual collaborator Jacques Prevert; they not only set their story in a theatrical world but divert from the action to show the actors at work. Kael counts five kinds of theatrical performances, and they would include Baptiste's miming and a scene from Othello that provides oblique reflections on the plot. It is Baptiste whose art leaves the greatest impression. Jean-Louis Barrault (1910-1994), then a star at the Comedie Francais, is first seen in clown makeup, glumly surveying the Boulevard of Crime, brought to life only by his mimed defense of Garance. Later, he stages his own extended mime performance--only to see, from the stage, Garance flirting in the wings. No one's trust is repaid in this movie.

If Carne was France's leading director, Prevert was the leading screenwriter, at a time when writers were given equal billing with directors. They both continued to work for decades--Prevert into the 1960s, Carne into the 1980s--but never surpassed Children of Paradise. Indeed, it was precisely this kind of well-mounted, witty film that was attacked by the young French critics of the 1950s who later became known as the New Wave. They wanted a rougher, more direct, more improvisational feel--theater not on a stage but in your face.

If the Cannes festival were to attempt again today to choose the best French film ever made, would Children of Paradise win? Perhaps. Perhaps not. Just as American audiences prefer Gone With the Wind or Casablanca while the critics always choose Citizen Kane, at Cannes the palm might go to Godard or Truffaut, or Jean Vigo's L'Atalante. But Children of Paradise, now finally available in a high-quality print and ready to win new admirers, might have a chance. Few achievements in the world of cinema can equal it. 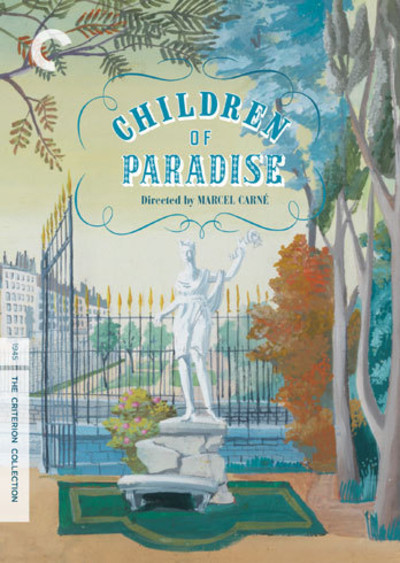