Lillian Gish told D.W. Griffith she was too old to play the girl in "Broken Blossoms," and perhaps she was. Born in 1896, she was 23 as Griffith prepared the production in 1919, and not as waiflike as audiences remembered her from "The Birth of a Nation," filmed five years earlier. But Griffith wanted a star, and Gish was that: Incredibly, in an age when silent actors never stopped working, this was her 64th film.

It is not as important as "Birth of a Nation," but neither is it as flawed; stung by criticisms that the second half of his masterpiece was racist in its glorification of the Ku Klux Klan and its brutal images of blacks, Griffith tried to make amends in "Intolerance" (1916), which criticized prejudice. And in "Broken Blossoms" he told perhaps the first interracial love story in the movies--even though, to be sure, it's an idealized love with no touching.

Gish plays Lucy, the daughter of a brutal London prizefighter named Battling Burrows (Donald Crisp); the titles tell us she was "thrust into his hands by one of his girls." A drunken "gorilla," he lives in a hovel in Limehouse, and when his manager berates him for drinking and carousing, he takes it out on Lucy. Their story is intercut with the story of Cheng Haun (Richard Barthelmess), called "The Yellow Man" in the titles, a Buddhist who journeys from China to bring "a message of peace to the barbarous Anglo-Saxons." Instead, he turns to opium, and "Limehouse knows him only as the Chink storekeeper."

Griffith shot the movie almost entirely on sets, creating a foggy riverside atmosphere to suggest hidden lives. Cheng's room is a refuge upstairs over his shop. Lucy and Battling live in a room without windows, where he sits at a table, wolfing his meals and drinking, while she cowers in a corner. When he orders her to smile, she uses her fingers to push up the corners of her mouth. He gives Lucy money for groceries and goes out to drink more, and she timidly ventures out to do the shopping, clutching a precious hoard of tinfoil, which she hopes she can trade for a flower to brighten her grim existence. On the streets, weary housewives warn her against matrimony, and women of the night against prostitution; thus her only two possible escapes seem closed. Through the window of his shop, the Yellow Man sees her, and "the beauty which all Limehouse missed smote him to the heart."

That evening, Lucy spills hot food on Battling's hand, and he whips her almost to death before going out to drink. She stumbles into the Chinese man's store, and he gives her refuge, with "the first gentleness she has ever known." She is able to smile at him without using her fingers. When Battling Burrows finds out where she is, there's a violent showdown, including a striking shot where Lucy, locked in a room with Battling splintering the door with an ax, turns in a helpless circle, screaming.

Gish was one of the great vulnerable screamers of the silent era, although she also had a good line in pluck and independence. In a long career that ended with "The Whales of August" (1987), she played many strong women. Here she is essentially the passive object of male fantasy--of Battling, who sees her as servant and victim, and Cheng, who idealizes her as his "White Blossom." Griffith emphasizes both her angelic face and her weakness by often lighting and photographing her from above, and many years later, on the set of Robert Altman's "A Wedding" (1978), I heard her rebuke a photographer who was trying for a low-angle shot: "Get up from there! Get up! If God had wanted you to shoot me from that angle, he would have given you a camera in your belly button. Mr. Griffith always said, `Shoot from above for an angel; shoot from below for a devil.' "

If the attitudes about race in "Broken Blossoms" are more well-meaning and positive than in "Birth of a Nation," they are nevertheless painfully dated for today's eyes. But of course they are. Marriage between the races was a crime in 1919, and so we see Cheng's face in closeup, looming closer to Lucy as if he wishes to kiss her, and then pulling away as the subtitles assure us of his pure intentions. Battling, of course, thinks the Yellow Man has had his way, but the girl cries out, "T'ain't nothing wrong!" Griffith intrigues his audience with the possibility of exotic sex, and then cuts to moralizing titles.

The stereotyping of the Chinese character begins with the choice of a Caucasian to play him. There were many Asian actors in silent films, but only one, Sessue Hayakawa, played leading roles, and the most famous of the early Asian characters, like Charlie Chan and Fu Manchu, were played by whites. The character of Cheng is an anthology of stereotypes: He is a peaceful Buddhist, opium addict, shopkeeper. But Griffith's film was nevertheless open-minded and even liberal in the context of his time and audiences, and we sense the good intentions behind patronizing titles like this one describing the advice Cheng gets from a Buddhist priest before his journey: "word for word, such as a fond parent of our own land might give."

Although the best silent comedy remains timeless and many silent films remain undated, melodrama such as "Broken Blossoms" seems old-fashioned to many viewers. Watching it involves an act of cooperation with the film--even active sympathy. You have to imagine how exotic such stories once seemed, how the foggy streets of Limehouse and the broadly drawn characters once held audiences enthralled.

In trying to imagine the film's original impact, it might help to look at Fellini's "La Strada" (1954). Pauline Kael finds many of Fellini's inspirations in "Broken Blossoms," including Zampano the strongman (Anthony Quinn), whose costume even resembles Battling Burrows'. Gelsomina (Giulietta Masina), his much-abused companion, is obviously drawn from Lucy, and Richard Basehart's Matto, who gives her shelter from the brute, fills the same function as the Yellow Man.

Griffith in 1919 was the unchallenged king of serious American movies (only C.B. DeMille rivaled him in fame), and "Broken Blossoms" was seen as brave and controversial. What remains today is the artistry of the production, the ethereal quality of Lillian Gish, the broad appeal of the melodrama, and the atmosphere of the elaborate sets (the film's budget was actually larger than that of "Birth of a Nation").

And its social impact. Films like this, naive as they seem today, helped nudge a xenophobic nation toward racial tolerance.

There is all of that, and then there is Lillian Gish's face. Was she the greatest actress of silent films? Perhaps; her face is the first I think of among the silent actresses, just as Chaplin and Keaton stand side by side among the men. When she was filming "The Whales of August" in 1987, her co-star was another legend, Bette Davis. The film's director, Lindsay Anderson, told me this story. One day after finishing a shot, he said, "Miss Gish, you have just given me the most marvelous closeup!" "She should," Bette Davis observed dryly. "She invented them." 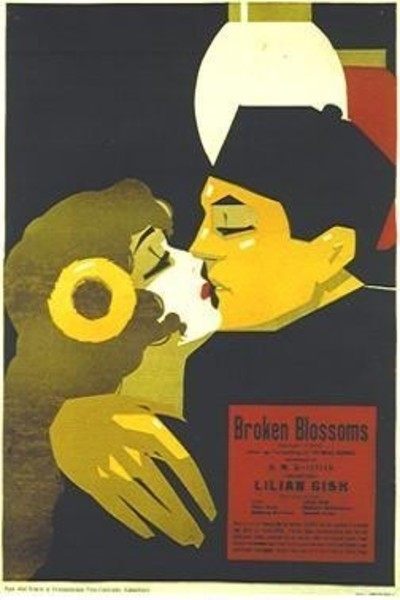