It’s a scam at first sight. Flustered by a bad day, comedian Andrea Singer (Iliza Shlesinger) bumps into a well-meaning stranger at the airport. That kind stranger, Dennis (Ryan Hansen), happens to sit by her on their flight to Los Angeles, and soon, an unlikely friendship forms between the comedian and the hedge fund manager. Although Andrea, through voice-over and stand-up monologues, insists she only ever sees Dennis as a friend, he nonetheless manages to worm his way into her life while keeping his a secret. When things escalate romantically, Andrea overlooks the many warning signs her friend Margot (Margaret Cho) points out until things really get serious.

Kimmy Gatewood’s “Good on Paper” is a catfishing (or cuttlefishing, if you take Margot’s definition) comedy I’m sure more than a few people can relate to, even if not to the comic extremes taken by Shlesinger, the film’s star and writer. The movie's tagline says it’s “mostly” based on a true story, which means Shlesinger includes some of the less-funny, still-creepy emotionally manipulative tricks Dennis uses to get Andrea on his side, including the extreme misogyny that motivates his behavior. Yet, despite its bitter truths, “Good on Paper” still keeps a sharp wit and sense of humor about the whole affair. Eventually, the situation escalates into a ridiculous climax before a few surprise twists and turns return the story back down-to-earth. "Good on Paper" plays like a mystery but one that telegraphs who the bad guy is, with a few laughs at his expense along the way.

Shlesinger’s deadpanned, matter-of-fact voiceover shares the commentary duties with interspersed clips from Andrea's stand-up set. Normally, this would derail the story's momentum as the lead tries to wring out any last-minute chuckles before moving on, but the way Shlesinger writes the part, she’s almost in conversation with her past (her time with Dennis), present (her voiceover) and future (the point after she’s processed what’s happened to her and can make jokes about it) selves about the ordeal. If only the work of exorcizing all of one’s evil exes was this cathartic. She’s not afraid to make her unlikable or caustic, in fact, it’s one of the more endearing parts of her personality: she’s able to see through and call out everyone’s bullshit except for that of a well-practiced sociopath. When she gets her chance to confront him, it’s a release, both for the character and the audience, to see her regain control and break his spell over her.

Hansen is a charming foible for Shlesinger. He’s sweet when she’s sour, he’s earnest when she’s cynical. Following the beats of a standard rom-com, it feels as if her defenses are getting in the way of an inevitable relationship, and it effectively makes her feel guilty for what prove to be solid defensive instincts. Even as Andrea is on to Dennis' lies, Hansen continues his aw-shucks demeanor, digging up one emotional expression or pained physical excuse after another to excuse his questionable behavior. Dennis is a bottomless wealth of darkness whose cruelty is so well-hidden beneath an unassuming facade, it’s a shock when he reveals his true self.

As Andrea’s best friend and partner-in-crime, Cho’s Margot starts out as the more logical of the pair, seeing the red flags long before Andrea, but eventually her performance and character tips towards some overblown reactions. It’s a chaotic shift that evens out for a few good one-liners, and moments of talking through the emotional aspect of seeing your friend survive an abusive relationship. Adding to the movie’s overall funny tone, the supporting cast delivers more than its fair share of jokes, including Rebecca Rittenhouse as a rival actress, Matt McGorry as Andrea’s cousin and actual Yale grad, and Kimia Behpoornia as Dennis’ frustrated but empathetic roommate.

There are millions of bad dating stories in any given city, but a long con targeting a working comedian feels like an especially L.A. story. Gatewood and Shlesinger emphasize this by playing-up city-specific details, like plot points affected by bad traffic and parsing through the different streets separating West Hollywood and Beverly Hills. It’s a strangely specific yet somewhat universal tale—something that could happen to anyone (a brief look at the eight seasons of MTV’s “Catfish” and its spinoff podcast would suggest it’s not so rare). Despite the movie’s darker aspects, Gatewood and Shlesinger escape with some decent laughs and pointed questions. “Good on Paper” sometimes gets silly, sometimes serious, but it never waivers from its mission of being funny through it all. 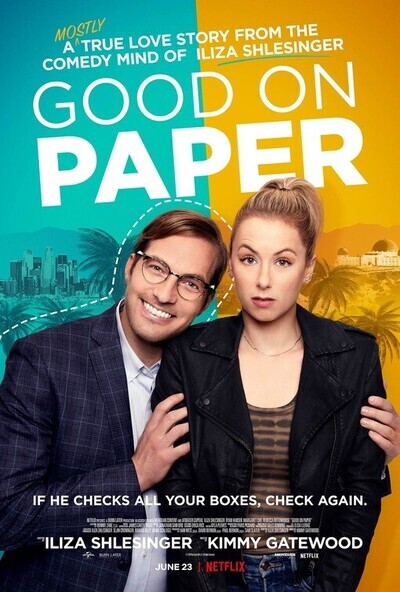 Rated R for language throughout, sexual references, and brief drug use and nudity.