How exactly did the makers of dismal Chinese war drama "God of War" mess up a sure-fire premise like "16th century samurai pirates vs. Sammo Hung and the Chinese army?" For starters, the film's creators don't let Hung, the charismatic and highly influential martial arts star and choreographer, do anything. Secondly—and most importantly—the film's screenwriters bog down their already arch characters with so much trivial background information that you can't help but emotionally check out long before we get to some (thankfully decent) action scenes. "God of War" is a spectacularly miscalculated historical epic, a movie that tries and fails to make the exploits of Chinese military hero General Jiguang Qi (Wenzhuo Zhao) exciting by way of endlessly explaining what he stood for, what political factors stood in his way, and why he never seemed to fight any damn samurai pirates.

Seriously, what's doing with these samurai pirates, and why are they not the stars of this picture?

Oh, that's right, because "God of War" feels like a stillborn attempt to do for General Qi what action star Donnie Yen and the "Ip Man" series did for its title character, Bruce Lee's real-life teacher. General Qi is a strategist, so he spends much of his time wading through red tape that prevents him from training soldiers, and defeating Japanese invaders. Qi is tasked with replacing/aiding less-successful Chinese Commander Yu (Hung), a well-regarded leader who keeps relentlessly attacking (but never succeeds in annihilating) a group of entrenched pirates. So the higher-ups in the Ming dynasty regime ask Qi to do what Wu doesn't have the tactical skill to do: kill 'em all.

There are a scattered handful of preliminary scenes where we see why Qi is such a big deal, like the one where he and Wu fight one-on-one in a prison cell, or the one where he outfoxes the pirates, and forces them to retreat. But for the most part, Qi's story is related through a series of conversations about everything but pirates. Qi struggles to raise an army. Then he tries to get the approval to train the army. Then he does a little fighting. Then he's yelled at for not capturing the Japanese pirates, which in turn leads Wu to being imprisoned. After that, he tries to have a reasonable conversation with the people responsible for locking up his predecessor. And he yells at his men for being drunk while off-duty. And things keep happening that have nothing to do with this movie's most exciting elements.

We're talking about a movie that features an otherwise enjoyable battle sequence that prematurely concludes with an inter-title that assures us that most Japanese pirates died during the skirmish than Chinese soldiers did. Blocky dialogue scenes frequently serve to explain the many reasons why Qi was stymied by the Ming officials and soldiers that needed him most. There's so much expository dialogue in this film that I practically yelled at the screen when I saw how much blood the filmmakers used during fight scenes. This is how you overcompensate for such an otherwise lame, and pointedly bloodless movie?

Realistically, the all-talk-and-precious-little-action approach that the makers of "God of War" adopted could have worked. There's nothing theoretically wrong with an action movie that tries to make you appreciate the lengths that its characters go to before they get to fighting. But "God of War" is not the film to sell it. There's a brittle, airless quality to its dialogue. Every character is treated with the utmost reverence. The lead pirate, an aspiring ronin who fights with honor, is too noble to be dislike. So is Qi's wife, who is simultaneously a capable soldier, but also a nag who gets upset at her husband for showing up late for dinner. Even Qi's soldiers, some of whom are portrayed as drunken embarrassments, ultimately prove themselves in battle.

Again, a nationalistic action movie is not necessarily an impossible-to-swallow premise. For proof, just look at "The Great Wall," an exemplary bit of pop propaganda. The makers of "God of War" weren't nearly as inspired. Their film feels simultaneously padded, and starch-stiff, a weird stylistic clash that will make you wish you were watching a better high-concept film. 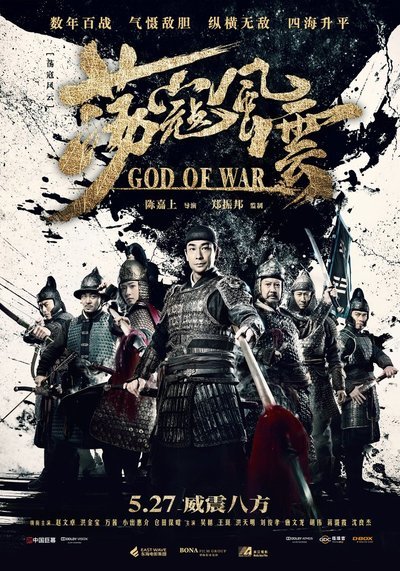