Gifted writers can create dialog that sounds like the way people really talk. But only the rarest of writers can make those words into poetry. The late August Wilson, whose plays include one for each decade of the 20th century, created stories epic in scope, tragic in circumstance, and yet still somehow hopeful. The characters may not be able to get what they dream of. But there is a sense of triumph in the plays themselves, the fact that the stories are told with such profound respect and compassion.

After August Wilson died in 2005, his friends and former colleagues established a student competition in his memory, inviting young actors to inhabit his characters and speak their words by presenting monologues. It began at just one school, then expanded nationwide. The documentary "Giving Voice" follows the 2018 competitors as they talk about discovering their love for theatrical performance and work with coaches and teachers. And then we follow the finalists from across the country as they visit New York City for the finals, attending their first Broadway show, Once on This Island. They meet with a cast member, 19-year-old Hailey Kilgore, who was in the August Wilson Monologue Competition twice.

The film also includes interviews with some of Wilson's collaborators, including Viola Davis, who won both a Tony and an Oscar for her performances in Wilson's "Fences," and stars in the current Netflix film "Ma Rainey's Black Bottom." She and her husband, Julius Tennon, are executive producers of the documentary. She says Wilson was "that one writer who saw me. I mean me but also people like me. For me he's a muse."

That feeling is echoed by the young actors who are thrilled to discover themselves, their families, and their communities in Wilson's work, within the rich characterization and wide variety of experiences his plays encompass. Freedom Martin says, "I always felt my experience as a Black man was different than other Black men's experiences. August Wilson was saying these are Black people regardless of what they went through. Which was life-changing. For the first time I felt comfortable in my own skin." Callie Holley talks about her feeling of recognition when she read Wilson's words: "I felt like that speech was already in me."

It is moving to see the commitment high school students bring to their monologues. Despite all they say about how much Wilson's words mean to them, they are playing characters from another era, long before they were born, characters who have experienced what their families have lived through and perhaps not talked about. It is even more moving to see the young performers grow in confidence as their range of opportunities and sense of responsibility expands. Wilson's widow, costume designer Constanza Romero, speaks of the competition as passing the baton. The next generation will keep the stories Wilson wrote alive.

Davis' "Fences" co-star and director, Denzel Washington, is producing film adaptations of all of Wilson's decade plays. Washington talks here about the instant familiarity audiences feel with Wilson's plays, especially the Black audience members: "That's what my aunt talks like." Romero talks about Wilson's decision to forego cancer treatment that would have prolonged his life so it would not impair his ability to finish the last of the ten-play cycle, Radio Golf. Wilson's long-time producer, Jack Viertel, talks about the importance of giving ordinary characters center stage. "That is what most of the world is about, a garbage man who used to be in the Negro leagues, a trumpet player who will never be famous."

Fittingly, the highlight of the movie is Wilson himself, seen in archival footage, an interview, and a graduation speech. "We are who we are today in society because of the things that have happened prior to this moment," he says. "But we live in a culture where we forget what happened two weeks ago. To know who you are and what you should be doing you have to know first what your history is." He used to sit in coffee shops taking notes on the conversations he overheard. He says that at first, "I didn't see the value in the way Black people spoke. You listen to them. If you listen you can hear but first you have to recognize the value."

In a lovely way, the title "Giving Voice" works both ways. Wilson gave voice to characters and experiences overlooked by mainstream theater. Those plays gave Black actors a chance to use their voices playing complex characters telling the truth about their lives. And this competition gives a new generation a chance to use their voices, returning the favor by keeping Wilson's own voice alive. 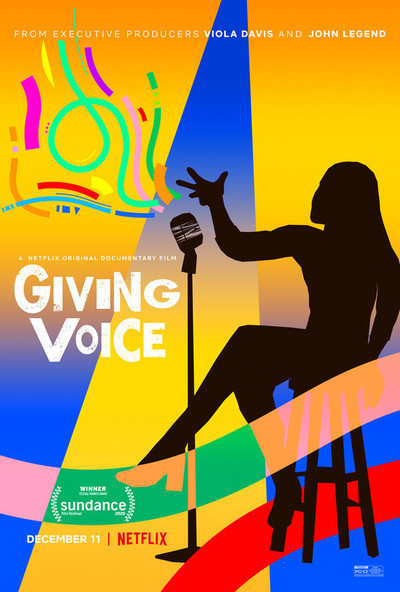