Based on the brief synopsis I received, “Ghost Team” sounded like a horror-comedy about a bunch of ghost-chasing misfits played by familiar names like “Napolean Dynamite”’s Jon Heder. At best, I thought it would be a New World Pictures-style knock-off of “Ghostbusters”; at worst, I thought it would be an Empire Pictures-style knock-off of "Ghostbusters." I was fine with either outcome, because you know I love trash. But “Ghost Team” is neither scary nor funny. The closest it comes to a legitimate scare is a sing-along set to Gary Wright’s "Dream Weaver," and the only hearty laugh is courtesy of Amy Sedaris’ Miss Cleo-inspired telephone psychic. You have to wait 78 minutes for it, but it’s there.

The ghost team is a motley crew selected by paranormal enthusiast Louis (Jon Heder). Louis owns a print shop where he spends his days printing numerous copies of lost pet notices. When his favorite show, "Ghost Getters," starts a contest looking for a new ghost hunter, Louis believes he can find visual evidence of the paranormal, which he can submit as his contest entry. To assist him on his quest, Louis creates his own version of the “Ghost Getters” team, which includes a techie, a co-leader, a researcher, a security person and a clairvoyant. To fill these positions, Louis chooses:

His buddy, Stan (David Krumholtz), who sleeps in a car and thinks his fiancée was abducted by aliens on their wedding day; his nephew Zak (Paul W. Downs), who works in a Micro Center; Micro Center’s overzealous rent-a-cop, Ross (Justin Long); psychic Victoria (Amy Sedaris) and Ellie (Melonie Diaz), the beauty salon worker who works next door to Louis’ shop.

You can figure out who does what job on your own. Trust me, it won’t matter.

Louis assembles this team after an old man asks him to print and laminate several “No Trespassing” signs. The old man yammers on about the property he wants to protect, piquing Louis’ interest only when he says it might be haunted. Armed with the address (which we don’t know how he got), Louis and the Ghost Team travel there with all sorts of stolen equipment from Micro Center. This is the moment when “Ghost Team” turns into a feature-length episode of the original “Scooby-Doo” cartoon, complete with its characters running past the same background scenery over and over.

If you have seen “Scooby-Doo” in any of its animated incarnations, you don’t need to see “Ghost Team." Its characters map to their cartoon counterparts rather nicely: Louis and Ellie are Fred and Daphne, Zak is Velma, Stan is Shaggy, Victoria is Scooby-Doo, and the obnoxious Ross is Scrappy-Doo. While trying to catch the "ghosts," the team members split up and get into mysterious troubles of their own. There’s even a villain whose ties to the “ghostly happenings” not only mask a more sinister plan, but so help me, God, he would have gotten away with it if it weren’t for those meddling kids and their psychic. The ghost team even shows up to the “mystery on our hands” in an oddly-colored van.

I’m making this sound better than it is, especially for Hanna-Barbera fans. But if you’re expecting “The Haunting” or "Ghostbusters," or “The Ghost Breakers” or hell, ghosts in general, you’ll be sorely disappointed with this film. It takes too long for the team to start ghost hunting, and screenwriter Peter Warren tips us off to what’s causing the paranormal activity way too early. What we are left with are these one-note characters, whose minor, sad-sack first-world problems aren’t worth any audience empathy whatsoever.

Additionally, each actor coasts by on the remnants of character types they’ve played in other, occasionally better movies. Only Melonie Diaz and Sedaris manage to leave any lasting impression, fleeting though it may be. Diaz brings a chipper spunk to her beautician role, which is best employed in a scene where she shuts down Heder’s attempt to get her alone on the ghost hunt. And Sedaris’ cynical disbelief that anybody would take her fake psychic seriously is a metaphor for the viewer’s reaction to "Ghost Team." Together, the ladies earn one half of the one star this movie deserves.

The other half-star is for Joe Hastings’ enjoyable horror movie type score. It’s all goofy stingers and ominous foreboding. You want to watch the movie it should be underscoring. Might I suggest this music accompany documentary footage of the cast cashing the checks they too easily earned for their work here? It would be far more compelling than “Ghost Team.” Funnier and scarier, too. 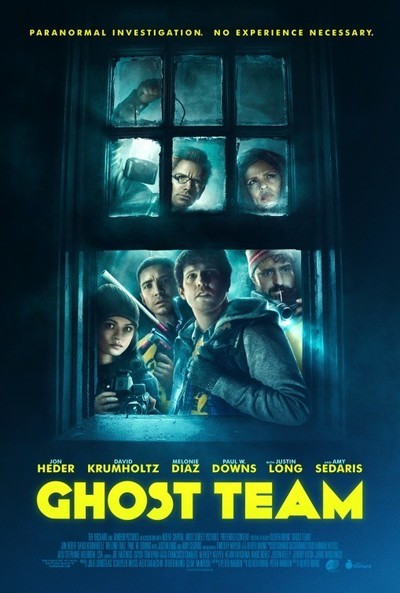 Rated PG-13 for language including some sexual references, and drug material.