Gett, the Trial of Viviane Amsalem

With "Gett, the Trial of Viviane Amsalem," siblings Ronit and Shlomi Elkabetz prove that they rank with the finest filmmakers alive.

Every shot, cut, line, performance, indeed every moment in this feature is perfectly judged, always conveying precisely what it needs to convey in order to define its characters and move the story forward. And yet the result never seems merely neat or efficient. Even though "Gett" tells of 45-year-old Israeli woman seeking a divorce from her domineering husband, and makes unsettling points about what it means to be a woman in a religiously conservative country (or a woman in any society), the film is less an object lesson, lecture, or problem picture than a comedy-drama about the complexity of people and the elusiveness of truth.

Most of the film takes place in a small courtroom, with the plaintiff, Viviane (co-director Ronit Elkabetz, who's also an accomplished actress), suing her husband Elisha (Simon Abkarian of "Zero Dark Thirty") for divorce. For women, divorce is much harder to obtain in Israel than in other Westernized countries. In fact, the husband holds most of the cards and rarely has to lay any of them down. The male-dominated, religiously orthodox panel of judges overseeing the case (led by Rabbi Solomon, played by Mandy Patinkin-lookalike Eli Gornstein) insists on a high standard of proof from Viviane—so high, in fact, that what should be a simple matter of filling out forms becomes an ordeal that would tax the patience of Job.

As depicted here, an Israeli woman can't split from her spouse without proving extraordinary abuse or neglect. A simple assertion of "We don't get along" or "This marriage was a mistake" is not enough. All the husband has do to preserve the status quo is avoid taking action—and that's what Elisha, a magnetic yet tactically aloof man, does in the first part of "Gett," asking for delays, failing to show up in court, and otherwise stonewalling and dragging things out in an attempt to wear Viviane down. He doesn't want to grant her wish. We wonder why. There seems to be little love left between them. Is his intransigence a matter of male pride: the fear of losing face? Or does he truly love her, so much that he'd rather be miserable with her than let her go?

The movie keeps us guessing, and even as it tightens the emotional screws, it never stops being enjoyable. That's because the filmmakers treat the courtroom as a golden opportunity for people-watching. Both the judges' elevated bench and the small tables at which the plaintiffs and defendants sit or stand feel like halves of a stage. Viviane and Elisha mostly seethe in silence, listening as their lawyers spar. The barristers are very different but seem evenly matched: pragmatic, skeptical Carmel (Menashe Noy) stumps for the plaintiff; the defendant is represented by his wily and talkative brother Shimon (Sasson Gabai), whose folksy demeanor becomes at once more endearing and more unsettling once you figure out that it's his most potent weapon.

Center stage is a smaller, podium-like table where character witnesses for Viviane and Elisha come to testify. When we get accustomed to the movie's distinctive rhythms, we lean forward in our seats a little bit whenever a new face appears, because we know the character is going to be different from, but as fascinating as, whoever stood there last.

Part of the fun lies in watching these witnesses come in with a rehearsed, polished story, only to relinquish it once judges and opposing counsel start poking holes in their facades. The cream of the crop includes Viviane's sister-in-law Rachel, a volcanically spirited woman whose testimony becomes a comic tirade against the inequities of male-female relations and the sham of marriage-as-partnership. There are also great, wise bits of observational humor involving the witnesses' inability or refusal to take direction from the judges.

The inertia at the heart of Viviane's plight makes watching "Gett" an unexpectedly tense and claustrophobic experience. For a film in which the characters do a lot of talking but not much moving around, and that unfolds in a handful of mostly small and plain locations, it's as relentless as an action-adventure picture. This is partly because the stakes are so basic and clear (Viviane is miserable and depressed, and wants to be free and happy) but also because the filmmakers have chosen to tell the story in a highly, ahem, unorthodox way: by adopting the perspectives of different characters from one moment to the next; positioning their shots so subjectively, and with such geographical precision, that we feel as though we've been dropped into a new consciousness, and allowed to see through fresh eyes. We might wonder why we're seeing a character in profile for several long seconds, or from a very low angle, or partly hidden behind another character's shoulder, and then a cut will establish who's doing the looking, and all at once we find ourselves thinking about what the information at that particular moment means to the person who's seeing and hearing it as it's being delivered.

The film's stylistic boldness might not have been necessary: the script is so tight and and propulsive and the large cast so skilled that the moviemakers could have just pointed the camera at the characters and probably created a reasonably thoughtful and engaging drama. But the direction is a masterstroke because it adds a literary or even poetic dimension to the movie, finding a visual analogue to the idea that the truth varies depending on who you are and where you stand.

The filmmakers' previous work, "To Take a Wife" and "7 Days," were superb as well, but this one is a step up in ambition and exactness. Every touch enriches or builds out the story, and yet "Gett" never loses focus on the heroine's plight. We're always with her, and often the throwaway touches are more devastating than the larger setbacks, as when a judge asks her if she wants water, and she politely declines, and a bailiff leaves the room anyway. You just know he's going to return with a glass of water anyway, and sure enough, he does. Rarely has such a simple gesture so clearly communicated what it means to be the heroine in a narrative you cannot control. 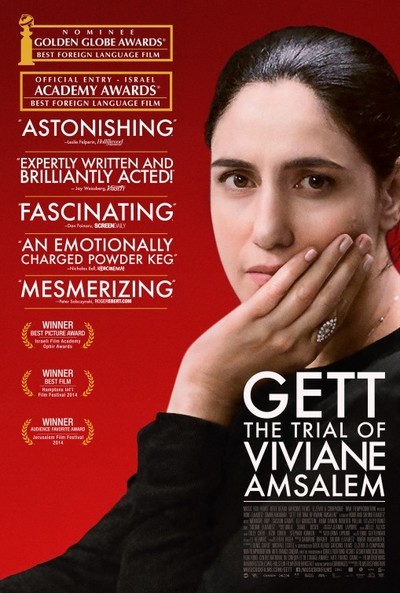