The car chase thriller "Getaway" has a wild premise and few good moments, and if there were an Oscar for wrecking police cars, it would absolutely win. But the characterization and dialogue are atrocious, the filmmaking is fashionably busy, and there's a lazy cynicism to the picture that sours its thrills.

Ethan Hawke plays Brent Magna, a former race car driver who returns to his home in Sofia, Bulgaria and finds the place wrecked and his wife missing. His cell phone rings. A teasing voice (provided by Jon Voight, who's in the credits and on the poster, even though "Getaway" coyly declines to show his face) tells Brent that his wife has been kidnapped and he must do as told or she'll die. First Brent must steal a heavily armored street racer packed with microphones and tiny surveillance cameras that let the bad guy spy on the hero. Then he must lead police on a high speed chase (the first of many) and roar through a crowded park, flattening tents, food stands and fruit carts. Things get crazier from there: more chases, more police cars, more wrecks, plus gunplay, fireballs, etc.

The result suggests "Speed" crossed with the "Fast" franchise and reimagined as a big screen videogame with actors. Brent is the player. Every action setpiece is a level. The sadistic puppetmaster pulling Brent's strings is the Big Bad, or ultimate villain. The pistol-packing computer whiz teen that Brent takes along for the ride—Selena Gomez, whose character is known only as The Kid—is a human book of Cheat Codes: a stealth exposition machine who was put in that car for a reason, and ends up helping the driver on his quest.

This may sound like a fine idea for a film whose main purpose is to showcase vehicles speeding, cornering, jumping and blowing up. John Frankenheimer's "Ronin" might be the greatest example of a movie that's mainly about speed for speed's sake. The racecar-loving director admitted that that 1998 classic's story was mostly a pretext for chases and lovely French scenery.

But the truly great chase pictures aren't solely about car chases. They create memorable characters who work at cross-purposes, so that the cars become extensions of the characters' personalities and desires, rather than machines that just happen to contain talking mammals. "Getaway" is all speed, all the time. Too much of the action feels weirdly anonymous. Much of it is shot in the fashionable Chaos Cinema style, where the cuts last two seconds and you rarely get a sense of where people or vehicles are in relation to each other. This approach ruins one's ability to appreciate the stuntpeoples' skill and the beauty of cars in motion, if indeed the director Courtney Solomon cared about such things in the first place, which I doubt he did.

We don't get the compensatory pleasures of watching people we care about fight for things that seem to matter because Solomon and his credited screenwriters, Gregg Maxwell Parker and Sean Finnegan, have saddled Hawke, Gomez and Voight with non-characters, and put weak dialogue in their mouths. ("Do me a favor, shut the hell up, will ya?" Brent snarls. "You shut up!" The Kid retorts.) Hawke does the best he can in a mostly unwritten role, but he's dull; Gomez chirps and grates; Voight is just lips, stubble and an accent. The treatment of Brent's wife Leanne (Rebecca Budig) goes beyond disappointing and into offensive. She has no personality. Her character consists of being terrorized in in a dungeon by swarthy goons. Solomon cuts to her tear-streaked face, or lets Brent hear her cries of pain and fear over the phone, to jack up the film's flagging energy. The bad guy might as well have kidnapped a puppy.

This would have been my first RogerEbert.com review with a zero star rating, were it not for two mitigating factors. One is the final stretch of the film, which boasts a couple of action scenes that hint at the great action film that might have been. The first is a face-off between armed cyclists and two vehicles in a parking garage: a marvel of claustrophobic frenzy. The second is an intimate two-vehicle chase that includes a very long unbroken shot through the windshield of Brent's car as he chases another driver on a crowded highway (a shot possibly modeled on Claude Lelouch's "Rendevous," as Variety's Scott Foundas pointed out). What makes these two sequences great, and the rest of the picture's chases frantic but tedious, is that they have the courage to settle on certain shots and let us absorb what's in them. They also give us a sense of Brent's foes as individuals with specific goals, which lets us judge everyone's progress and become invested in their fates.

The other mitigating factor, surprisingly, is that same visual style that's irritating elsewhere. When Chaos Cinema isn't chopping action into razzle-dazzle confetti, it can achieve fascinating effects, particularly when it's conveying feelings or ideas rather than specific actions (as in "Tree of Life", which is one long montage, and parts of Michael Mann, David Gordon Green and Wong Kar-Wai's films, which drift into reveries). There are moments where "Getaway" puts the style to good use. Parts of the movie were shot on high definition video, other parts with grainy/streaky consumer-model cameras or tiny spy cameras. The way the picture cuts between the formats while the villain taunts Brent via cellphone while tracking his movements via satellite is unsettling: it's as if the whole city has become an electronically monitored prison cell. During non-action scenes, there are arty, abstract dissolves between people, vehicles, landscapes and streetlights that collapse characters, locations and even timeframes into a sort of Perpetual Here and Now. These collage-like interludes suggest that the filmmakers are trying to mix a bit of philosophy into the mayhem—perhaps even make a statement on how modern technology will keep erasing distinctions between virtual and real space, until there's no "there" there anymore.

Unfortunately, most of "Getaway" is so bad that these inspired touches can't save it. It's a loud blur. 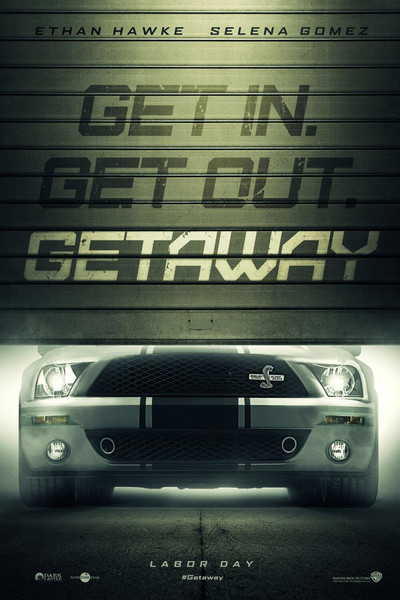 Selena Gomez as The Kid

Jon Voight as The Voice

Paul Freeman as The Man (voice)