There are parts of "Gerontophilia," queer/punk icon Bruce LaBruce's romantic-comedy about a love triangle between two young people and a rather old man, that feel way more generic and tame than they actually are. The film does eventually become a road movie, complete with quirky truck stop shop-lifting. And the love triangle never gets so graphic that it's aggressively confrontational. In fact, the fact that "Gerontophilia" is immediately palatable is what makes its creators' perspective that much more inviting. This is a comedy that encourages viewers to be impulsive, and pointedly seek love and acceptance outside of "normal" social institutions, especially when it comes to family and romance. It's about cherishing impulsivity over introspection, and amassing life experiences without fear of negative consequences. Like John Waters' comedies, "Gerontophilia" is funniest when its creators establish an imaginary universal line of good taste just as they over-step it. LaBruce ("L.A. Zombie," "The Raspberry Reich") and co-writer Daniel Allen Cox have made a winningly light comedy, even if it does ultimately suggest that we should do more than just respect our elders.

LaBruce and Cox immediately shake viewers up in their film's first scene. While Lake (Pier-Gabriel Lajoie) aggressively necks with girlfriend Desiree (Katie Boland), she ruins the moment by rattling off the names of "true [revolutionary]" feminists, like punk rocker Kim Gordon, serial killer Aileen Wuornos, and actress Winona Ryder. This scene is as close to a functional heterosexual coupling as you'll find in "Gerontophilia." Lake then locks eyes with a frumpled older crossing guard while the object of his affection stares back quizzically, as if Lake were Pepe Le Pew and the crossing guard were a panicked tuxedo cat. Lake then leaves his job as a lifeguard after a close encounter with a drowning older man, and accepts a summer job from his alcoholic mother at a local nursing home. While there, Lake explores his romantic interest in older men with Mr. Peabody (Walter Borden), a sassy, introverted patient whose family never visits.

Mr. Peabody personifies the film's genuine irreverence. LaBruce and Cox don't present him as a simplistic comic foil for Lake, but as something of a catch for anyone who's into the same things Lake is. The scene where Lake gives Peabody a sponge bath is filmed lovingly for the sake of earnestly relating what Lake sees when he looks at Peabody. Lake and Peabody's attraction isn't chaste, nor fundamentally intellectual. Peabody does take after his cartoon canine namesake, and treats Lake to stories of his past. Peabody also immodestly drinks gin, and matter-of-factly enjoys the sight of Lake taking his clothes off when they play cards for, uh, high stakes. Yes, Lake and Peabody are essentially using each other: Lake wants to explore his granddaddy fetish, and Peabody wants to feel sexy, and empowered one last time. And there's nothing wrong with that!

"Gerontophilia" celebrates self-involved characters who are both selfish and sympathetic. Even Desiree isn't treated like a typical third-wheel protagonist. In one memorably charming scene, Desiree, a bookstore clerk, goes home with a nervous older patron. It's obvious that the man, who looks conspicuously like John Waters, wants sex. Desiree knows this, but she goes with him anyway, marveling at his book collection, including a first-edition of the SCUM Manifesto. In a moment, Desiree's gentleman caller isn't just a one-dimensional creep, but a lonely, well-read, and creepy older man. And in that moment, you can see why Desiree considers spending time alone with this guy in his apartment. You don't have to be completely compatible with someone to be attracted to them.

It's refreshing to see LaBruce and Cox encourage viewers to go out and do things without fear of being abnormal, or going against societal norms. "Gerontophilia" feels like a kinder, gentler film than one might expect from LaBruce, a filmmaker whose provocations are typically more sexually explicit, and way more humorously alienating. But "Gerontophilia" is enjoyable because it has softer edges that do nothing to diminish its hard core. It's an inclusive comedy that is also radical in its insistence that you don't need to distinguish between what your head and your groin want. LaBruce and Cox don't baby their viewers, and they don't pander to their expectations. Instead, they expect their audience to be mature enough to accept that our idiosyncratic hang-ups are what make us human—or freaky. 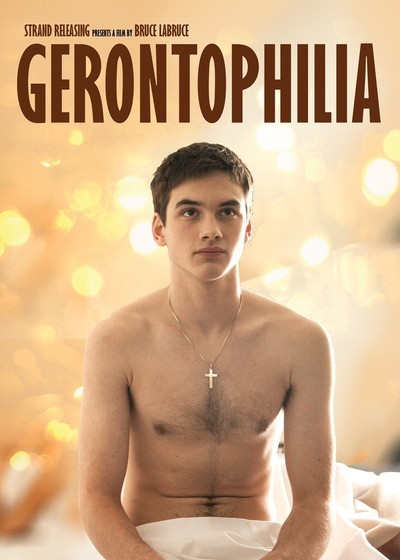