G.B.F., an acronym for "gay best friend," isn't exactly OMG material. Not with this rather quaint premise: An accidentally outed teen's companionship is fought over by a highly competitive trio of status-conscious clique queens as if he were a rare Birkin clutch.

It's not as if director Darren Stein, who treaded similar territory with 1999's "Jawbreaker", and first-time screenwriter George Northy aren't entirely unaware of this less-than-haute situation. One plot twist actually finds an exasperated character declaring, "What is this, 2008?" Yet when something as highbrow mainstream as "Downton Abbey" boasts a closeted-male storyline, the news that homosexuals are just like us seems about as fresh as reruns of "Modern Family".

Still, once this self-consciously campy fairy tale stops trying so hard to emulate every high-school comedy and TV show from the past 30 years and relaxes into a stream of clever repartee and amusing situations, it eventually offers enough LOL opportunities to deserve a passing grade.

With its fruit-punchy color scheme and bouncy soundtrack, "G.B.F." also earns extra credit for skirting any outright malice in its treatment of the types of characters who typically are the villains (think Rachel McAdams in "Mean Girls") and allowing them the room to stretch as humans as well.

North Gateway, the suburban academic institution at the center of the story, has no known gay personage among its entire student body. Glad to be under the radar is Tanner (Michael J. Willett, who knows how to work a charming smile), an introverted comic-book geek whose lack of stereotypical fabulousness is milked for much humor. Meanwhile, his more flamboyant friend Brent (Paul Iacono, as swishy as a feather boa) is angling to make a splash as the first among his peers to announce his preference for other males. Technology foils Brent's plans when the leader of the school's gay-free Gay-Straight Alliance employs a GPS-like phone app to hunt down non-hetero recruits and Tanner, who has posted a photo of his "four-pack" abs on the site to attract a potential beau, gets caught in their net.

The school's three divas supreme—spoiled fashionista Fawcett (Sasha Pieterse), drama-club glamazon Caprice (Xosha Roquemore) and prissy Mormon princess 'Shley (Andrea Bowen)—swoop in like well-coiffed vultures to vie for Tanner's attentions, the better to elevate their social profile and possibly secure the title of prom queen. But first, they combine efforts to pump up their new pet's "homosexiness" potential. When he confesses to the girls that he enjoys comics, Fawcett's face lights up: "Like Kathy Griffin? She's hilarious." Tanner: "No, like comic books." Fawcett, crestfallen: "That's not gay. That's just lame." He submits to their makeover since the powerful threesome provides a welcome shield against any bullying jocks. Meanwhile, Brent seethes with jealousy on the sidelines and plots mild revenge.

There is plenty of fallout—and some solid zingers—prompted by Tanner's big reveal, including a campaign by an evangelical female student to shun the "sodomite" in their midst. "What's a sodomite?" asks the clueless 'Shley. "I think it's like a dust mite," declares 'Topher (Taylor Frey), her undercover gay boyfriend, who will soon be hitting on Tanner. "But with sod."

The prom, of course, serves as the finale but with a twist. Since Tanner can't buy tickets if he attends with another guy, Fawcett decides to host an alternative dance. Brent, still an undercover gay, retaliates by joining forces with the traditionalists. It all ends quite sweetly enough. Seems that everyone, even secret science whiz Fawcett, has side of themselves that they keep tucked away.

While the cast is made up of mostly youthful newcomers of varying degrees of ability, a couple of elders also crash the party. Jawbreaker alum Rebecca Gayheart and Jonathan Silverman show up as Tanner's wacky parents, who exist simply to make salacious comments about Mom's homemade gluten-free popsicles. Natasha Lyonne stops by as the adult adviser of the Gay-Straight Alliance. Her cat's name? Anderson Coo-purr.

But leave it to "Will & Grace" graduate Megan Mullally, who certainly knows her way around a gay joke, to take the MVP title as Brent's over-zealously supportive mother. To console her son after Tanner steals his spotlight, she organizes a parent-child night of bonding over such queer cinema classics as "Milk", "Boys Don't Cry" and, yes, "Brokeback Mountain". Mullally's cheerleader-like narration of the infamous pup-tent encounter ("Heath, don't stand on your pride!") is definitely PDH—pretty darn hilarious. 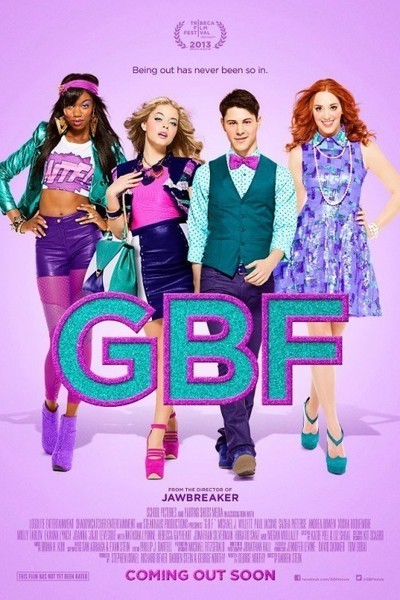