The stoner comedy style refined by Anders Holm, Blake Anderson and Adam DeVine on the Comedy Central hit “Workaholics” for seven seasons has moved to Netflix and gotten even raunchier, crazier, and more defiantly reckless. “Workaholics” meets “Die Hard” in the comedy “Game Over, Man!,” an admirably stupid affair that amply displays the abilities of its comedic collaborators in a way that elevates it above many other Netflix original comedies but a movie that probably works better if you’re seriously drunk or high. It’s often clunky and often offensive, but there are moments that remind one how often “Workaholics” was pretty damn funny in the way it captured a certain kind of man-child who can’t leave the drunk/high/horny culture of college life behind even when they graduate to a cubicle. It will work best for those lamenting the cancellation of the Comedy Central hit that spawned it, but probably not much for anyone else.

“Game Over, Man!” stars Holm, DeVine, and Anderson as three relatively interchangeable bros who work housekeeping at a fancy hotel. In their spare time, they work on a tech project called Skintendo, which is sort of a virtual reality thing, but they really use most of their time to get high and act like idiots (sort of like they did on “Workaholics”). Leaning into the personalities developed on that show, Holm is the de facto leader of the group, mostly due to his ego, and Anderson is the sweeter, smarter member of the trio. DeVine is the borderline lunatic once again, giving the actor the chance to show off his physical comedy chops, and his willingness to do absolutely anything to get a laugh.

The action of the comedy takes place on the night of a major party at the rooftop bar of the hotel, hosted by the insanely popular and insanely wealthy Bey Awadi (Utkarsh Ambudkar). Just as the guys are mustering up the courage to present Bey with their tech startup idea “Shark Tank”-style, a group of high-powered assassins (led by Neal McDonough and Rhona Mitra) take over the party. They’re going to hold Bey and his party goers hostage, including a hotel employee played by Aya Cash of “You’re the Worst,” until they get millions of dollars transferred to their account. Our heroes stumble into a plan to stop them and save the hostages.

To say that “Game Over, Man!” thrives on extreme comedy would be an understatement. Imagine the envelope-pushing humor of “Workaholics” with no concern about offending advertisers. A few of the more extreme sequences in “Game Over, Man!” feature autoerotic asphyxiation, attempts to torture Bey by making him toss another man’s salad, and a severed penis used as a prop. It’s the kind of thing that could send a conservative viewer to the hospital with cardiac arrest. I am far from a traditionally conservative viewer when it comes to comedy, but even I rolled my eyes at the ridiculousness of this whole enterprise a few times. On the one hand, there’s something admirable about being willing to do anything for a joke. On the other, extremity isn’t funny on its own unless you’re really high.

More problematic is how often “Game Over, Man!” sabotages its best bits. There’s a funny, extreme beat in which DeVine’s character chooses to “hide” by pretending to have choked himself to death with his dick in his hand in a closet. But then that bit is followed up by some pretty extreme homophobia. The “Workaholics” brand of humor often pushes a joke past its breaking point—where it goes from funny to annoying. And that happens more than once in “Game Over, Man!” The best bits are often the quickest ones, including a scene with Shaggy that is undeniably funny, and the times when the comedians are just riffing off each other. And the movie gets markedly funnier as the pace picks up because of the plot. Early scenes that go on way too long—there’s a used condom bit that will likely have many viewers lunging for the SmartTV remote—are supplanted by a quicker pace.

“Game Over, Man!” is grotesque, violent, insane and offensive—in other words, it’s kind of exactly what you’d expect from a “Workaholics” movie unrestricted by basic cable censors. If you’ve never seen the show, you might want to dip your toe in the water with it before jumping into this deep end. If you’re already familiar, suit up and dive in. You know what you're getting into. 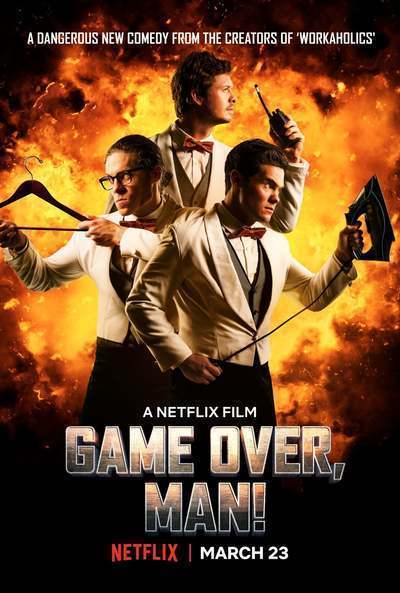