A bored Millennial touches himself within the first three minutes of “Game of Death,” a new horror movie about murderous youths that has nothing to do with the famous Bruce Lee film of the same name. No, this “Game of Death” concern seven waifishly thin twenty-somethings who discover something new about themselves when they, on a whim, decide to play an old board game called, well, you get the idea. This game literally draws blood from all seven participants, and then tasks them with killing 24 people “before the clock runs out” (though I never saw a clock, so this part’s a bit unclear). If they don’t kill fast enough, the game will (and sometimes does) pick them off by spontaneously exploding their heads. So a killing spree ensues, though “spree” makes it sounds a lot more fun than “Game of Death” ever really gets.

I’d like to tell you that “Game of Death” picks up after a few tentative murders, but that’s not really true. There is some hyper-stylized sex early on, the kind that puts too much emphasis on orgiastic moans in order to establish a theme so wispy that the filmmakers barely touch it: young people are innocent because while they’re desensitized and immature, they’re also addicted to physical sensations, just like you and me. Okey doke, now what?

Eventually, two distinct groups form: the first party kills other innocent bystanders, while the second party stalks the first party. The killers get yelled at, and are told to “stop acting like we’re in a f**ing video game” and “This ain’t f**in’ Carmageddon”; sometimes they respond in kind by yelling things like “I would rather die” or “If we don’t kill somebody, it’s suicide.” Neither response is especially inspiring.

I’ve so far neglected to name the actors who star in “Game of Death,” as well as the characters that they play, because while the ensemble cast’s performances are mostly fine, their characters are unmemorable. Tom (Sam Earle) and Beth (Victoria Diamond) have sex; she sits on his face while wearing a bikini. Tyler (Erniel Baez) is a drug dealer and conspiracy theorist, though his paranoia is limited to random buzzwords that he carelessly strings together. Matt (Thomas Vallieres) and Ashley (Emelia Hellman) hesitate, so their personalities are expendable. There are two other key cast members, but their characters blow up early on, so I didn’t take notes about them. I suppose that’s a spoiler, for which I apologize.

“Game of Death” has already played at several film festivals, including SXSW and Sitges, but it feels more like a wannabe Troma movie: though it’s got less nudity and gore, it has the same grubby, unpolished DIY spirit as the short films that compete at the annual TromaDance Film Festival. Sadly, “Game of Death” doesn’t really have the surreal anger, or manic urgency of the best Troma movies. Kids get shot, sometimes explode, chase each other, and yell about how they don’t want to get shot or explode. They curse instead of having more sex. They kill some more. They’re young, dumb, and covered in blood. Maybe that’s enough for you; I don’t think it should be.

Sometimes “Game of Death” perks up, especially when Marilyn (Jane Hackett), a weirdly chipper local sheriff, appears. Hackett’s character seems to have been inspired by Marge Gunderson, Frances McDormand’s canny, but folksy Chief of Police in “Fargo.” Marilyn is only as eccentric as Marge, but that’s ok since nobody else in “Game of Death” has much personality. All Hackett has to do to steal a scene is talk into her car’s radio. In another scene, she sings to her dog. In a third scene, she recites the Pizza Hut jingle. At length, which seems to irritate the movie’s kill-crazy meat puppet protagonists. Still, I’d never heard that version of the Pizza Hut jingle, so I found that amusing.

But how about that “Game of Death”? I can’t recommend it, mostly the storytelling isn't especially strong, and its high-concept hook is stale. I know that my generation is desensitized, morally bankrupt, and bored enough to kill whatever pain they can’t auto-stimulate away. But a few exploded heads, paired with lousy one-liners like “Death is the final level” and “You reptilian b**ch,” don’t really do much for me. I’ll wait for the inevitable sequel, which might follow the first movie’s surviving cast members as they chase after some Gen Z copycat killers. They can call it “The Big Boss”; I mean, nobody’s done anything with that title for a while, right? 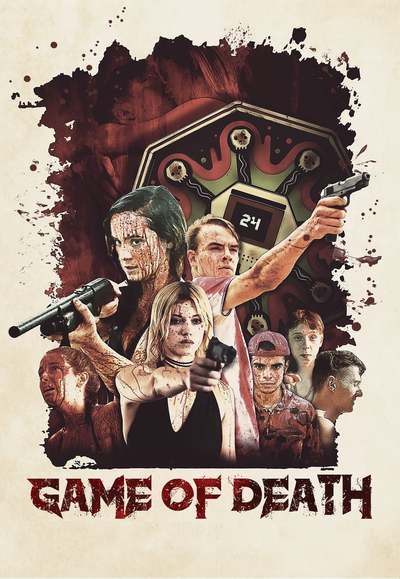