“What kind of movie is this? Where could it possibly be heading?”

Normally, if you find yourself asking such questions, say, a half-hour into a movie, it’s a sign of one of two possible things. Either the film is a hopeless, unfocused muddle that doesn’t know what it’s up to. Or it’s purposefully oblique, taking us on a journey to new and unexpected cinematic destinations.

Happily, Karim Aïnouz’s “Futuro Beach” is a prime example of the latter. And in this case, the unusual artistic itinerary is mirrored by a significant geographic-cultural one.

The tale begins on the eponymous Brazilian beach, a stretch of brilliantly white sand, except that in the film’s first minutes our gaze is drawn away from it and under the ocean’s waves, where bodies are flailing in a way that makes desperation seem almost balletic. Two men are threatened with drowning, and one doesn’t return from the sea.

One of the rescuers, Donato (Wagner Moura), is an ordinary-seeming twentysomething who has an ailing mother and a younger brother, Ayrton (Savio Ygor Ramos), age ten, who worships him to the point of dubbing him a superhero—Aquaman. A day or so after the apparent drowning, Donato is in his office when the lost man’s pal drops by to discuss the situation. Konrad (Clemens Schick) is a German, a rough-hewn veteran of the Afghanistan war. He and his friend had been on a journey down to South America, aiming eventually to return to the motorcycle repair shop they own in Berlin. Donato explains that the attempt to find the body will continue. Once the meeting concludes, he offers Konrad a ride back to his hotel.

Cut to: the two men in a torrid sexual encounter, sweat-soaked, the German aggressively thrusting into his gasping partner. Though this scene arrives only a few minutes into the story, perhaps it’s fair to ask: Can we now type what we’re watching as a gay film, though one that, given its manner, might also be considered an art film?

Perhaps, but it’s remarkable how little this tells us about the characters, what the film is up to or where’s it’s headed. In another good example of the gay/art blend, Alain Guiraudie’s “Stranger by the Lake,” we sense from fairly early on that it’s a Hitchockian thriller with certain readily identifiable gay types caught up in the drama. Here there are no such convenient genre or character markers. Moreover, everything is conveyed with maximum obliqueness. In the scene in Donato’s office, for example, there are hints of what will happen next, but they are so subtle that they perhaps can be recognized only in retrospect.

Everything that follows is equally circumspect. The search for Konrad’s friend continues, and one night he and Donato go down to the pounding surf to see if it has washed up on the rocks. Konrad talks about continuing his trek southward and returning when the body is found. What’s just below the surface here is just the opposite of what’s being said: Konrad doesn’t really want to leave Donato, who also isn’t eager to part.

We understand this when the second of the film’s three parts begins. The two men are now living in Berlin, where Konrad is teaching Donato the language. Konrad has returned to his other passion, motorcycles, and takes long rides at night by himself. How do the two men feel about each, as the days turn into months? It’s hard to tell; they are working class guys who obviously aren’t in the habit of verbalizing their feelings. Indeed, it’s easier to get a sense of their relationship from watching them dance in a disco than from anything they say.

Eventually, though, it’s clear that Donato is depressed by the grayness of Berlin. “I can’t live in a place without a beach,” he says. He announces his intention to return to Brazil, buys a ticket and makes all the necessary preparations. Konrad accompanies him on the train to the airport. But when the train reaches the airport stop, Donato doesn’t get off.

Ultimately, “Futuro Beach” is a film about displacement and identity, love and its costs. Its considerable satisfactions, though, come mainly from the way the story is told, which spells nothing out, and in fact is so reticent that the viewer is constantly drawn into the creation of meaning. This is a poetic approach, to be sure, but it is entirely nonchalant and unstudied; and it extends to the understated beauty of the visuals, where the contrast between the bright colors of Brazil and muted hues of Berlin is its own drama.

Aïnouz, who was born in Brazil and now lives in Berlin, has said that Fassbinder’s “Ali: Fear Eats the Soul” was in his mind when making this film. I was reminded more of early films by Wim Wenders such as “Alice in the Cities,” as well as Fatih Akin’s “Head On,” another great movie about immigrants in present-day Germany. As such comparisons suggest, Aïnouz is now in a great place: the company of masters. 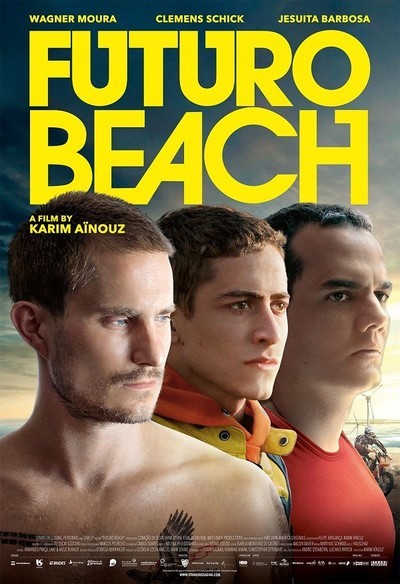