Exhibitionism is a sad business in “Funhouse,” a punishing social media satire that features, among other unpleasant attractions, a scene where a young woman sobs helplessly as she takes off her top. This is Ula La More (Karolina Benefield), one of a few D-list celebrities that participate in "Furcas’ House of Fun," a deadly reality show-style competition that’s basically “Survivor” by way of a snuff film. Unwitting contestants sign up because they’re hungry for attention and the game’s top prize: $5 million.

Still, Ula cries when she shows us her breasts, and her tears are meant to speak not only for her character, but her creators, whose pessimistic view of social media is less than convincing. Another character, in an earlier scene, is accused of crying “crocodile tears,” but Ula’s sobs are “more genuine,” according to sadistic gamemaster Nero (Jerome Velinsky). “People love authenticity,” he adds, boldly providing “Funhouse” with its epitaph.

The sight of a crying half-naked woman is exactly the sort of exploitative image that viewers are supposed to feel bad for gawking at. Ula is, after all, looking directly at the camera and flashing us from inside a “confession booth.” At the time, she’s trying to convince House of Fun viewers to vote for her so she won’t have to compete in the next elimination challenge, which, again, is fatal. The FBI is aware of Nero’s online game show, but cannot locate it in time to save contestants like Ula from killing each other.

So we’re stuck with Ula and the others as they fight among themselves and struggle to win the approval of Internet rubberneckers. If they don’t get enough votes, they must play degrading party-game-style contests, like “Piñata Party,” where one contestant is tied up and attacked with a spiked baseball bat; the other contestant (the one with the bat) is blindfolded and made to wear sound-proof headphones. Nero’s funhouse is a well-upholstered meatgrinder, complete with tacky upscale furniture and fixtures, like the nude, Korova Milk Bar-style mannequins that bookend the living room’s flat-screen. That groanworthy pop culture reference is as scathing as this media critique gets.

As for Ula: she’s one of a handful of meat puppet protagonists, none of whom are more sympathetic than their inhospitable circumstances. The same is true of the movie’s lead protagonist, backup singer turned reality show star Kasper Nordin (Valter Skarsgård). Kasper’s sometimes presented as a righteously pissed off voice of moral relativity, somebody who can respond to Nero’s speeches about the soulless and braindead “Internet Age.” “A woman's breasts are more censored than a slit throat, the word 'f**k' more than a severed head,” Nero says at one point. “And look no further than any comment thread of any social media platform to see how quickly a harmless debate can devolve into aggression, violence, and hate." Kasper’s clapbacks are unfortunately just as shallow—“What, mommy and daddy didn't love you enough? Couldn't get a date to prom?”—and only ostensibly more satisfying given how unconvincing the movie’s set pieces often are.

What’s the point in watching a feel-bad movie about simulated violence when the gore and gamesmanship are as perfunctory and vapid as Nero’s lazy button-pushing speeches? (My favorite one-liner: “no one really cares" about torture "unless it happens to a specific group of people, of a specific color, in a specific country.") In one scene, two unlucky competitors lunge at each other with battle axes; they can’t see each other, because the lights are out, but the other contestants can see everything through a two-way mirror in an adjoining room. The mirror is equipped with “night vision,” which is as sensible as this movie gets. Or how about when Nero challenges one contestant, a chess grandmaster, to a game of chess, which is played on ... a novelty-sized board? The game pieces aren’t people, the board looks like it was stolen from a nearby playground, and the dramatized gameplay is as rushed as it is sad-looking. Remind me what we’re supposed to feel bad about enjoying?

The action in “Funhouse” is consistently cheap and generally silly. That’s sort of the movie’s point, but it’s also sort of hard to care when everything else is so tacky. It’s also hard to feel dutifully chastened by the movie’s smug, nihilistic finale since, by this point, it’s obvious that the filmmakers were either uninterested or uncomfortable with their own high-concept premise. “Funhouse” might have been a more effective provocation if Lee and his collaborators were as good at needling viewers as they are at broadcasting their intentions. But too many punches are pulled, and the nastiest scenes are never quite nasty enough. Ever get the feeling you’ve been cheated? 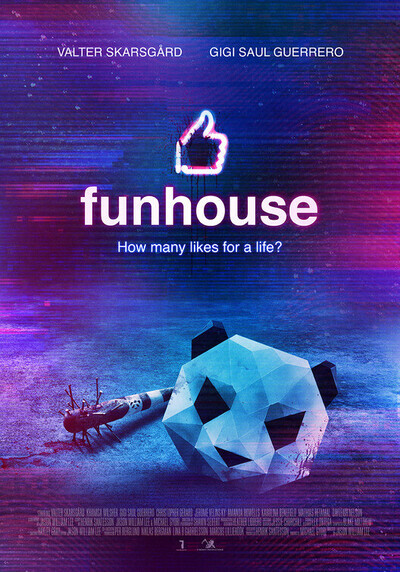