From the Land of the Moon

It may have been earlier for you—I can be skeptical to a very definite fault—but for me, 2013’s “The Immigrant” was the moment I finally accepted Marion Cotillard as an acting force of nature. Not that I had disliked the French performer prior to that. I always enjoyed seeing her turn up, even in otherwise ghastly films (remember her in Ridley Scott’s mortifying attempt at light comedy, “A Good Year”?). But it was with “The Immigrant” that I had that moment of transition from “She’s very good” to “she’s incredible,” and that impression held, of course, through 2014’s “Two Days, One Night,” her collaboration with the Belgian filmmaking brothers Luc and Jean-Pierre Dardenne. For “Anchorman 2,” maybe not so much. But you get the idea.

Cotillard is the anchor of “From The Land of the Moon,” directed by Nicole Garcia from a script that Garcia, Jacques Fieschi, and Natalie Carter adapted from a novel by Milena Agus. She plays Gabrielle, a woman of post-WWII rural France who’s a fool for love. The picture begins by framing a flashback. Gabrielle and her husband Jose are driving to Lyon, taking their young son to participate in a piano competition. She sees a street sign, demands the car stop, and runs out. Her husband placidly drives on, which is odd. Gabrielle finds a house, and an apartment belonging to one Monsieur Sauvage, which sounds like a pretty potentially on-the-nose name. She contemplates ringing the bell … and the flashback begins. Gabrielle is in late schooldays, mooning over a teacher who gives her a copy of Wuthering Heights and practically propositioning him days later. Willful Gabrielle seems, later, to be shaping her life according to the parameters limned by a Bronte sister, or perhaps by Flaubert. She is bedeviled by physical pain, and her mother tells a doctor she’s not sure whether her daughter isn’t faking them. Frustrated by Gabrielle’s behavior, the mother offers to marry her off to a local Spanish laborer. Jose’s pride is affronted, but not too terribly. The feisty Gabrielle immediately informs him that she’ll never love him.

So, it’s not an immediately blessed marriage, but Jose manages to keep his frustrations tamped down, at least for much of the time. This is because he’s a decent sort, but also because Gabrielle’s not faking her physical pain. Diagnosed with what we now call plain old kidney stones (the movie’s French title, “Mal de pierres” translates to “bad” or “evil” “stones”), she seeks a “cure” at a mountain spa that specializes in water treatments.

Away from domestic life, she luxuriates in the crisp air. Soon she spies Lieutenant Sauvage, played by Louis Garrel, a young French male star with what Bullwinkle Moose used to call “the ultry-sultry look.” Pale and quiet, missing a leg from his stint in the war in Indochina, Garrel’s character seems too delicate to live. And so Gabrielle and he are drawn into a very fraught affair.

It is this Lieutenant whom the now more steadily domesticated Gabrielle seeks out years later. But not before a reluctant return home, the birth of a child (which she believes to be not Jose’s), and a meaningful chat with her younger sister, who mentions she’d like a divorce. “We don’t divorce in this family,” Gabrielle tells her sister. The sister responds, “You’ve not been unhappy with Jose?” Gabrielle allows that she has not. This seems rather improbable.

“From the Land of the Moon” is a melodrama with an interesting trick in its tail, but I don’t think that director Garcia pulls the trick off as well as she might have. The movie is sumptuously shot by Christophe Beaucarne; every frame is robustly picturesque. But the story could have used a little less “Under the Tuscan Sun” and a little more “All That Heaven Allows.” Not that I mean to be cryptic about it, but I don’t want to give the whole thing away either. In any event, even if the execution lacks in other areas, Cotillard has a field day with the role of Gabrielle, committing to her needy passion without batting an eye, even when it’s manifesting itself in the most mortifying ways. It’s a protean performance. 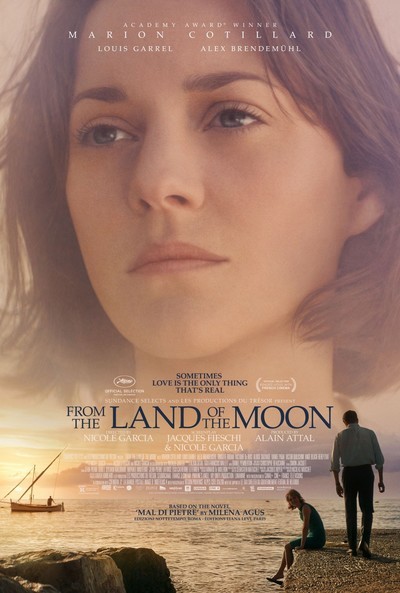 Rated R for some strong sexuality and graphic nudity.