While the fact that Lorenzo Vigas’ polished but clichéd “From Afar” won the prestigious Golden Lion at the Venice Film Festival suggests that it must have been a particularly weak year for the world’s oldest major film fest, there’s an appropriate irony in the victory’s locale. For the Venezuelan feature is the latest to descend from “Death in Venice,” the granddaddy of all older-gay-man-lusting-after-virile-youth films.

Both Luchino Visconti’s fin-de-siècle template (based on Thomas Mann’s novella) and Vigas’ contemporary iteration have a certain cinematic pull. They involve copious amounts of desire-charged looking, and the protagonist’s visual pursuit of his amorous object can be read as a corollary for every cinematic spectator’s concupiscent gaze. But there’s difference in the older and the latter-day ways of telling such stories.

In “Death in Venice,” desire remains unrequited, both emotionally and sexually, which reason might suggest is an accurate appraisal of the fates of such situations in real life. In the newer versions, a certain kind of fantasy meshes with or entirely trumps reality: the younger man eventually responds emotionally to the older, and there’s usually a sexual convergence as well, however brief and furtive it may be.

In the realm of gay features, such films—in which the younger man is often a hustler or criminal—are so numerous as to comprise an entire subgenre. Among the movies aimed at top-drawer festivals, on the other hand, they’re rare enough to be taken as exceptional. And some occasionally are: Robin Campillo’s “Eastern Boys,” which debuted at Venice a couple of years earlier, is a better example of the form, one offering more originality and emotional force than Vigas’ film.

“From Afar,” in any case, is built on reticence. When it opens, middle-aged Armando (Alfredo Castro) spots an attractive young man at a Caracas bus stop, then follows him onto a bus. The younger guy can tell what Armando’s gaze implies and appears slightly repulsed, until his suitor flashes a wad of bills. Then they’re back at Armando’s darkened apartment, where he instructs the boy to turn around, take off his shirt, pull his pants down halfway and stand still as he masturbates.

So this is Armando’s pattern: It’s all about looking and self-pleasuring, not emotional connection. Possible reasons for his outlook are suggested in a subsequent scene where he and his sister discuss the recent return to town of their father, a powerful businessman whom they apparently hate for reasons unspecified. With this family dynamic coloring the background, Armando continues his pursuit of the young and available.

The lithe, sullen Elder (Luis Silva), who looks 17 or 18, though, is not as compliant as some. He beats Armando up and takes money and a valuable item or two from his apartment. Nothing about the film suggests that its protagonist is a masochist, but he’s sufficiently taken with Elder that he goes after him and strikes up a relationship of sorts, in part by doling out money for things the boy wants, such as a refurbished sports car.

It emerges that like Armando, Elder also has daddy issues. This presumably is meant to explain something about the conjunction of the two, but it’s a rather trite psychological idea that’s never persuasively developed. Instead, Vigas’ script gives us various side issues and opaque conflicts, such as Elder’s violent confrontation with his girlfriend’s brothers, which adds some visceral tension but is never explained.

What follows contains no spoilers, but it’s worth noting that when, in the story’s latter sections, it takes the expected turn toward emotional and sexual engagement between the two main characters, it also waxes more formulaic and less credible. Very suddenly, after a day at the coast, Elder leaves off being surly and becomes so friendly toward Armando that he invites him to a family party where some of the boy’s relatives, sensing that something’s going on between the two, are outraged.

While Elder’s decision makes very little sense given the cultural context—and he’s been presented as so dim and loutish that we can’t credit him with making a deliberate statement—it perhaps proves that a filmmaker can get away with a lot of affronts to common sense as long as his movie’s surface is expertly wrought.

And “From Afar”’s certainly is. Vigas, whose debut this is, must’ve aced his finals in Modernist Art Film 101, because the movie has a cool, understated look and plenty of clever touches in its compositions and use of variable focus. The filmmaker also does a more than capable job with his lead actors, the Chilean Castro proving expertly restrained and quiescent while Silva is all cockiness and coiled volatility.

Guillermo Arriaga ("Amores Perros," "21 Grams") is also credited with co-writing the film’s story, which perhaps helps explain its narrative weaknesses. For though it doesn’t feature the scrambled chronologies or sudden shifts of locale that marked “Amores Perros” and “21 Grams,” “From Afar” suffers from the writer’s way of using disjuncture and opacity to suggest meaning where, if you look closely enough, there really is none—at least none beyond the tired conventions on which many “Death in Venice”-descended films rest. 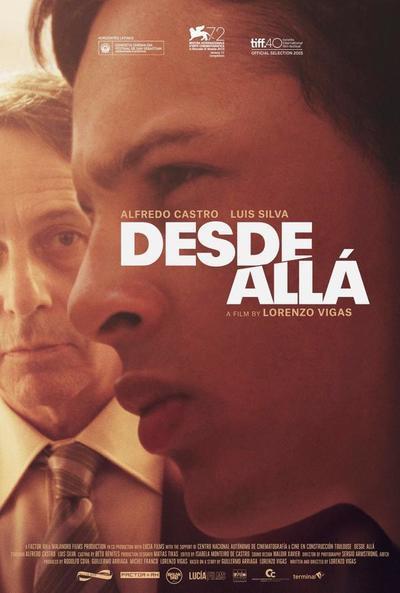