Watching “Fresh Dressed,” I occasionally felt myself swept up in the nostalgia of my childhood and adolescent brushes with style. It started as soon as I recalled the Slick Rick lyric the movie may have taken its title from: “Fresh dressed like a million bucks/Threw on the Bally Shoes and the fly green socks.” Director Sacha Jenkins chronicles the evolution of urban fashion, from the designers who made it to kids like me who sought it, stole it or bought it. We were all on a quest to be “fresh,” a desire that hasn’t left me to this day. I can equate my early love for a good Kangol to my current fixation on the fedora I plan to be buried in when I die. When I know I look good, all my troubles temporarily disappear.

So this movie pressed a lot of buttons I didn’t mind having pressed. For a while, I was lulled and seduced by clip after clip of the attire I coveted as a teenager—leather outfits, Adidas suits, sneakers with fat laces. And “Fresh Dressed” touches on that feeling of worth I just described, threatening to become an intriguing inspection of the sociological effects of wearing one’s “good clothes.” It primed me for a deeper discussion on how “clothes make the man,” then disappointed me by devolving into a huge commercial for fashion designers past and present.

“Fresh Dressed” offers up every single designer who inspired a Black or brown person to go shopping on Delancey Street. The parade of fashion people seems endless. We get Kanye West representing the present with his clothing line, and Sean Combs, Karl Kani, Tommy Hilfiger and the folks behind FUBU and ECKO repping the past. Cross Colours gets mentioned, as well as older brands like Polo and Ralph Lauren (one of the talking heads—I won’t say whom—gives a hilarious shout-out to Mr. Lauren’s clothing). Granted, these brands and others that get mentioned are integral parts of the documentary’s subject as a whole, but we learn very little about how their designers created their urban styles. It’s just story after story of how this rapper wore this outfit and made this designer famous. Even in this regard, there were untapped riches to be had. I would have loved to hear a more detailed conversation about how female artists like TLC and Yo-Yo commandeered the male-dominated clothing lines to carve out a place of freshness for the ladies.

Occasionally, a moment of rare insight finds its way through the marketing noise, such as when we hear how a slave’s “Sunday Best” church attire was used to judge how good his life supposedly was on the plantation; or when rappers like Kid ‘n Play and Big Daddy Kane discuss the dangers of getting “vicked” for your clothing and footwear. There’s also a helpful discussion about how folks could identify what part of New York City you hailed from based on your ensemble, and a brief mention of how street art and tagging influenced the artwork people painted on their pants and denim jackets.

“Fresh Dressed” was produced by Nasir Jones, aka the rapper Nas, whose 2014 documentary “Time Is Illmatic” is a far superior meditation on what writer Chester Himes called the similarities between absurdity and reality in Black life. “Fresh Dressed” does deserve credit, however, for touching on this notion, acknowledging the painful truth that looking “fresh” was a Catch-22 for poor kids. The latest fashions weren’t cheap back then, and they still aren’t. Yet there is no price too steep if it buys one some self-esteem. “You had roaches and rats in your house,” one person says, “and yet, when you stepped out looking good, none of that mattered.” Everybody in your neighborhood knew how poor you were, so an opportunity to dress like royalty, regardless of circumstance, was too good to pass up. Even if it meant risking the chance you might get shot for your shoes, or have your doorknocker earrings ripped out of your ears in a run-by.

The throwback elements of “Fresh Dressed” are probably enough for most people to thoroughly enjoy the film. But nostalgia only gets you so far, and I hungered for more sustenance. But since we’re on the subject of nostalgia, beg me the indulgence of telling a brief story I remembered while watching this film. When Run-DMC showed up onscreen, I recalled how badly I wanted to dress like them. My parents had five kids, however, and they were too broke to indulge my fashion whims. So I got a paper route, which was absurd for someone who couldn’t ride a bike AND who lived in a neighborhood full of bite-happy dogs. But I did that route, and then another and another, saving my tips until I was able to buy a leather outfit and some Adidas that, full disclosure, fell off a truck.

I wore that outfit on Easter, and my look was immortalized in a picture my mother took of me and my cousins. The kid in that picture, whose heart was full of the splendor of looking “fresh,” would have enjoyed “Fresh Dressed” far more than the cynical old man he became. 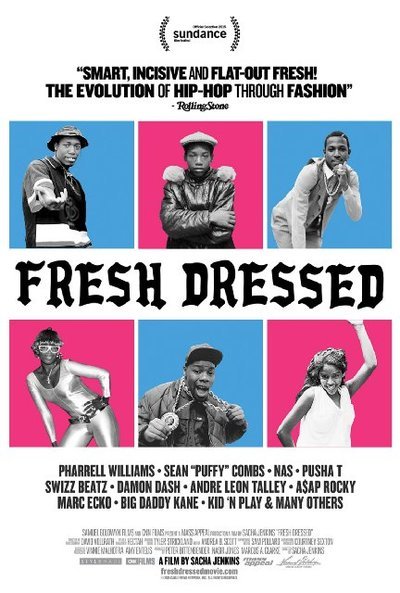