On the surface, the new slavery drama "Freedom" may look like an exceptionally blatant attempt to cash in on the critical and commercial success of "12 Years a Slave" but the actual film turns out to be a whole lot stranger than that. In fact, not only does it juggle two distinct story lines that follow a family of escaped slaves trying to get to freedom and how a slave ship captain went on to write one of the key songs of the abolitionist movement nearly a century earlier, it tries to do it in the form of a near-musical in which the characters are often found singing the notable hymns and spirituals of the time. It sounds interesting in theory, I concede, but it is much less so in practice because this is one of those movies that is as dull as it is well-meaning and man, is it ever well-meaning.

The main story begins in Virginia in 1856 as Samuel Woodward (Cuba Gooding Jr.) and his family escape from the dreaded Monroe Plantation in the hopes of connecting with the Underground Railroad and making their way to ultimate freedom in Canada with the help of Quaker activist Thomas Garrett (Michael Goodwin). For their owner, Jefferson Monroe (David Rasche), this will not stand ("No slave has ever escaped from my plantation!") and he calls in notorious slave hunter Plimpton (William Sadler) to bring them back alive, especially Samuel's wife, Vanessa (Sharon Leal). Plimpton has long since left the business out of certain moral trepidations but agrees to go in pursuit of them.

Understandably embittered from a life of unimaginable hardship, Samuel cannot even bring himself to sing with the others in his group but his mother (Phyllis Bash) informs him that "one day, you will sing 'Amazing Grace'" and recounts the story of the song's composer, John Newton (Bernard Forcher), in a series of flashbacks. Newton was a ship's captain and amateur songwriter who was put in charge of the first slave shipment from Africa to Charleston, among them a young boy who would grow up to be Samuel's great-grandfather. During the rough passage, Newton's eyes became opened to the cruelties of the trade and before long, he would undergo a religious conversion, become a devout abolitionist and write the song that would prove to be his most lasting legacy.

By attempting to weave these two disparate narrative threads together, "Freedom" does demonstrate some ambition but ambition can only take a movie so far if the filmmakers are unable to make them pay off in a satisfying way and that is the problem here. The screenplay by Timothy A. Chey is kind of a mess in the way that the natural tension of the story involving Samuel's family and their flight to freedom is constantly being interrupted by the Newton narrative. Perhaps even more troubling is his insistence on stressing the religious faith of the more noble characters and the suggestion that the slaves be open to the notion of forgiving their tormentors—the former conveniently overlooks the fact that plenty of slave owners back then were of a devout nature as well and the latter notion requires far more exploration and debate than it is given here.

The musical aspect of the film is a mixed bag as well. On the one hand, the songs heard—including "Swing Low, Sweet Chariot," "Sometimes I Feel Like a Motherless Child" and "Hard Times"—are among the most powerful tunes ever written and the performances heard here are quite nice. On the other hand, there are so many songs being sung by the characters, even when logic would seem to suggest that silence might be the wiser option, that they eventually become distracting—either debuting director Peter Cousens (a well-known musical theatre performer in his native Australia) should have made the whole thing a flat-out musical (a risky move but one that could have paid off beautifully in the right hands) or stripped a few out to keep things moving. (One sequence that could have easily disappeared is a strange segment where the family is aided by a acting troupe whose head (Terrence Mann) leads them all in a singalong that comes mighty close to suggesting that jazz was invented by some white guy decades before its previously held historical beginnings.)

Beyond that, Cousens handles the material in an utterly nondescript matter—though he does betray a certain stiffness whenever he has to stage a scene involving more than a couple of people. For the most part, the actors go about their work in much the same way in that they don't do anything especially awful but never quite find a way to connect with the material in a meaningful way either. (The only one that does is William Sadler, whose work as the newly conscientious slave hunter shows a degree of nuance that the film as a whole never seems to know how to handle.) Probably the most unassailable aspect to the film is the cinematography by Dean Cundey ("Halloween," "Who Framed Roger Rabbit?" and "Jurassic Park" to name just a few of his credits), whose work lends an additional luster to what was presumably a project on the lower end of the budget scale.

"Freedom" has clearly been made with the best of intentions but intentions do not count for much if the film itself doesn't amount to much. It spends so much time trying to edify viewers that it forgets to give them anything of real emotional interest. The end result is like a history lesson delivered by a teacher with absolutely no presentation skills to speak off—the story may be sound and important but it has been conveyed in such a passionless and off-key manner that most people will find themselves tuning the whole thing out long before the conclusion. 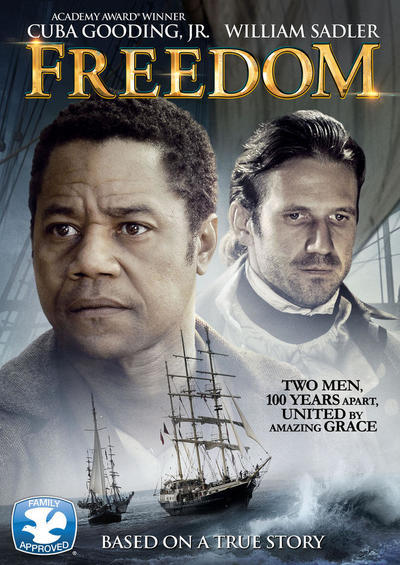