For a country that dubs itself “the land of the free,” America has succeeded for centuries in erasing the histories of its disfranchised citizens from the history books. Transgender identity never entered my own awareness until trans activist Jazz Jennings and her family began sharing their story on the excellent TLC program, “I Am Jazz.” For most cis viewers, it would seem that the very existence of trans people has only emerged in recent years. But, of course, it was Christine Jorgensen who first received widespread media attention in the U.S. for her sex reassignment surgery which began in 1952, the year my parents were born.

What makes Chase Joynt’s first solo outing as a feature director, “Framing Agnes,” such essential viewing is the extent to which it sheds new light on the legacy of trans Americans from the past century and beyond, whose voices are only just beginning to emerge from the vault of obscurity. Based on Joynt and sociologist Kristen Schilt’s 2019 documentary short of the same name, this picture spawns from an astonishing discovery the pair made in the UCLA Gender Archives. Prying open a long-neglected drawer led them to find the entirety of case files detailing the life of a trans woman named Agnes, who claimed in the 1950s to be intersex to receive the gender-affirming surgery that she would otherwise have been deprived of. Agnes’ triumphant effort in navigating a system designed to exclude her has made the woman a hero in the trans community.

Her story alone would be worthy of a feature film, as would those of five other trans people interviewed by Dr. Harold Garfinkel in the 1950s. But, instead, the transcripts of these conversations are staged by Joynt in the format of a black-and-white talk show, evoking how the media have framed transgender people for decades. In his director’s statement, Joynt says that he wanted to subvert the narrative of isolation that both the media and medicine have perpetuated in regard to the histories of trans people, alienating them from any communal support systems. “In reality, trans communities have been navigating and world-building together behind the scenes since before ‘trans’ was a thing,” he notes.

In the film, he openly voices his discomfort at being a white trans masculine man tasked with portraying these stories onscreen. Perhaps that is why he casts himself as Garfinkel while gathering a remarkable array of talent to breathe richly textured life into the transcripts. Zachary Drucker of “Transparent” fame takes on the role of Agnes; poet Max Wolf Valerio, author of the 2006 memoir, The Testosterone Files, plays Henry, who was born a girl in 1917; Angelica Ross (“Pose”) channels the soul of Georgia, a Black trans woman faced with far more obstacles than her white peers; “Dickinson” director Silas Howard inhabits the skin of trans man Denny; screen newcomer Stephen Ira captures the youthfulness of 15-year-old Jimmy, and Jen Richards (“Mrs. Fletcher”) is especially electrifying as she digs into the nuances of her real-life character Barbara’s pointed answers.

Perhaps the film may have succeeded in illuminating the diverse community of trans people by simply juxtaposing these conversations, allowing us more time to get to know these long-forgotten historical figures. Alas, Joynt seems almost afraid to spend too much time on them, continually pivoting away from the reenactments to underline their artifice or discuss with the actors how they see their experiences mirrored in those of the people they are portraying. This results in a picture that feels as if it is being constantly disrupted by its own making-of documentary, which is initially disconcerting and more than a little maddening. At one point, Valerio is informed by Joynt between takes that his character of Henry likely committed suicide not long after the conversation he’s portraying took place—not exactly the sort of crucial information one would typically feed to an actor on the day of filming.

None of these frustrations are as important as they may have been since the film is ultimately more of a self-reflexive exploration than a straightforward dramatization. What anchors the picture throughout its all-too-brief 75-minute running time is the brilliance of trans historian Jules Gill-Peterson, whose insights somehow cause the film’s many intricate layers to coalesce while beautifully articulating the essence of Joynt’s intent. It materializes in the words of a teacher who told Gill-Peterson, “Our job as historians is not to act as if we know things about people that they didn’t already know themselves.” At a time when historical figures are being judged purely through the prism of our current era, “Framing Agnes” encourages us to take people such as its titular heroine off the mantle reserved for objectified icons and see them for the complex human beings they are. In a powerful archival clip, actress Laverne Cox echoes these precise sentiments by informing Katie Couric on her talk show that trans people should not be subjected solely to invasive questions about their surgical procedures, as if that is all that defines them.

One of the film’s most moving moments occurs as Gill-Peterson, whose welcome presence gradually dominates the picture, is asked to read a stunning excerpt from an unpublished 47-page manuscript penned by Henry about his life and why there isn’t nearly as much of a difference between men and women as society would lead us to believe. “Framing Agnes” leaves us wanting to hear a lot more from the invaluable voices it has unearthed and all who are yet to be heard. Its framing devices may be too complicated for their own good, but what lingers is the humanity of the subjects Joynt has invited to speak for themselves. As the film fluctuates seamlessly between black-and-white imagery and the color of our present day, we find ourselves basking in the warmth of community, leaving no shadow of a doubt that there is strength in numbers. Among cinema’s great gifts is its ability to make us feel less alone, and “Framing Agnes” pries open the door to a world that holds the potential to save lives. Joynt knows that one film cannot encompass the entirety of this subject matter, but he has provided us the key for further exploration and that in itself is worth applauding. 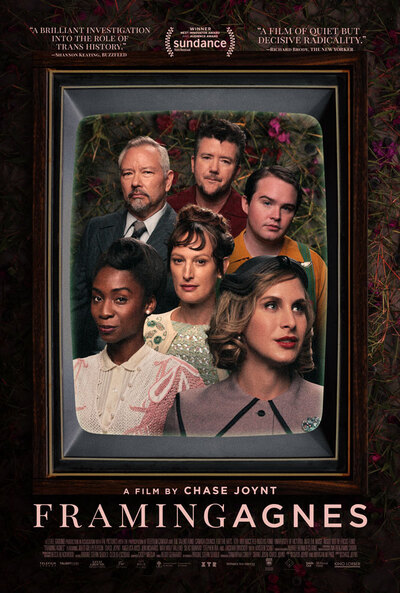 Jules Gill-Peterson as Self