Assumptions of biological familial connections are widespread. Paperwork at the doctor’s office asks about family medical history. Well-wishers tend to comment on whether a child looks more like one parent or the other. And any difference ethnically or racially between generations of a family can lead to questions about where someone is from, really, or where someone is from, originally. Films about adoption often address some or all of these issues, and Amanda Lipitz’s documentary “Found” inserts itself into that landscape in a number of predictable and unpredictable ways.

Lipitz has crafted in “Found” a portrait of the effects that China’s former one-child policy, in place for nearly 40 years with a number of modifications, had both throughout that country and the United States. Past an intertitle informing us that more than 150,000 children, mostly girls, were adopted from China between 1979 and 2015, the documentary is sparse on official data or an analytical perspective. Information explaining how many children ended up in the United States, how the policy was enforced differently in varying areas and economic classes in China, and the longstanding societal impacts of a policy that for many families caused a prioritization of boys over girls, are lacking here. And experts on China’s population planning, fertility rate, or economic transformation are missing, too.

Instead, “Found” is devoted to exploring the person-to-person relationships and economic possibilities borne out of this policy, which led to children being anonymously abandoned on street corners, on building stairs, and under trees because their parents either could not afford to care for them, or could not afford the many-thousand-dollar government fee they would have to pay to keep them. Lipitz shows us the bonds between orphanage “nannies” and the dozens of children they cared for, between researchers who work to find birth families and the curious adoptees who hire them, and between various relatives in birth families who are also searching for the children that they gave away. Intimacy, rather than assessment, is the goal, and so “Found” follows three American teenage girls adopted from China who learn through DNA testing that they are cousins. They live in different parts of the United States, they’re slightly different ages, they practice different religions, and their opinions on their biological parents and their country of origin vary. And Lipitz, in tracking the girls and their families for a number of months, allows their myriad opinions—contrasting between each other, and sometimes contrasting within themselves—to be the documentary’s primary concern.

What is it like to grow up looking different from your parents? To be asked by your classmates how you can be Asian and Jewish at the same time? To watch home videos of your childhood spent in an orphanage that you don’t remember, surrounded by women speaking a language you can’t? Teenagers Chloe, Sadie, and Lily have struggled with those questions individually, and then find solace and solidarity in each other. Through months of video chats that Lipitz uses to share their personalities, the girls get to know each other and talk through their questions, regrets, fears, and curiosities. With the frankness and rawness of youth, they chatter about their college plans, about the boys they like, and about how much of their Chinese culture they want to explore—or feel any affinity toward in the first place.

Lily, who is about to attend college and who was raised by a single mother, is increasingly interested in finding her biological father. She’s conflicted about her decision to get jaw surgery, and wonders whether reshaping her jaw line is somehow a betrayal of her birth parents’ genetics. Chloe is disinterested in searching for her biological family, but is determined to learn Mandarin in addition to the Hebrew she already knows from her Jewish family. And Sadie, who like Lily is open to finding her birth parents, admits feeling very little connection to her mother’s extensive Irish background—“Technically they have no ties to me”—but also mentions that her friends call her “the whitest Chinese person.” Together, the girls decide to go on a Chinese ancestry tour, which connects them with Beijing-based research officer Liu Hao. “You can find the peace in your heart” once you know where you come from, Liu says, and she sees herself as a detective connecting the dots in people’s pasts. Her interactions with birth families are infused with an atmosphere of resignation and tragedy, and when the teen cousins and their parents make it to China, it’s Liu who guides them forward to both revelations and disappointments.

On the one hand, “Found” makes a suggestion, similar to the one in the 2016 biographical film “Lion,” which some adoptees might find narrow-minded: that a child who finds their birth parents also finds themselves. Assuming that all adoptees would automatically believe in the self-fulfillment of reunion is bound to result in some individual erasure of opinion. But on the other hand, “Found” does an effective job planting us in the shoes of these three young women and documenting their transforming senses of self. There’s a thought-provoking contrast between Chloe’s admission that she’s feeling increasingly unfulfilled by the bubble of white people in which she grew up, and Sadie’s admission that “I’ve just always identified myself as an American,” and “Found” finds its way by letting each young woman speak her truth. 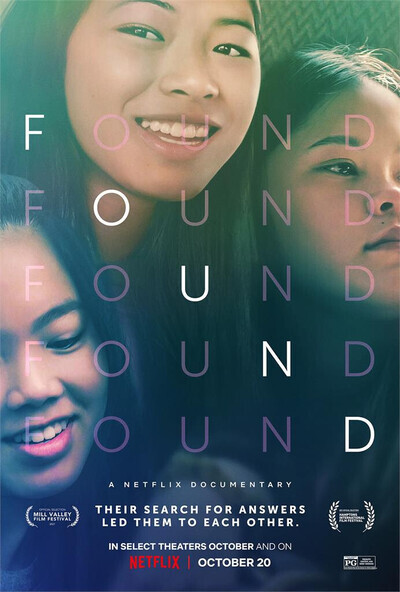