You can tell some things about the gory hostage thriller “For the Sake of Vicious” just by looking at its title. That exploitation-friendly name is a giddy declaration of intent. For 80 minutes, you watch a series of explicit, slowly escalating acts of violence set in or around one central location: the nondescript two-story home of Romina (Lora Burke), an overworked nurse who, at the end of a long shift, discovers that her home’s been invaded. For reasons that barely make sense, blood-soaked stranger Chris (Nick Smyth) has attacked and subdued Romina’s whiny landlord Alan (Colin Paradine) in her kitchen.

There’s not much psychological realism holding down this particular genre exercise, but there is a fair bit of horror-movie-specific surreality, as you might hope for given the movie’s title. Because as its name suggests, “For the Sake of Vicious” is a Tarantino Lite tribute to the grindhouse cinema of the 1970s and 1980s. Unfortunately, the quality of storytelling here often isn’t strong enough to hold one’s interest throughout such a diminutive runtime. Still, you might enjoy yourself if you don’t expect much character development, but do look forward to some creative uses of improvised weapons, like a hammer and a septic tank lid.

I wanted to love “For the Sake of Vicious” because of its title alone. A low-stakes action/horror mashup, one whose violence is periodically treated with all of the self-seriousness of a Grand Guignol spectacular? Count me in. I have a very soft spot for contemporary genre movies that focus on stuntwork and magic trick-style splatter effects. And I especially like that writer Reese Eveneshen’s script, which he adapted from a story by Gabriel Carrer, is more about situational peril (and therefore melodramatic plot twists) than realistic character development. I’ll always root for a hyper-focused and sometimes tongue-in-cheek B-movie, especially if it’s not too self-referential.

Problems inevitably arise if that B-movie isn’t relentless enough to keep a cocktail napkin plot moving from one confrontation to the next. For starters: Chris’s beef with Alan isn’t that interesting. He claims that Alan raped his daughter while Alan says that Chris is misrepresenting what happened. Romina’s caught in the middle, not only because she’s Chris and Alan’s reluctant host, but also because she previously treated Chris’ daughter at her hospital. Oh, and also: a mysterious group of masked killers roll up to Romina’s house partway through the film, which forces her and Chris to team-up a little faster.

That clunky set-up isn’t really important though—and I’m not sure it has to be—given how uneven Eveneshen’s pulpy dialogue often is. Sometimes it’s refreshingly clipped, and boils down to a series of cool declarative statements. I especially like when Chris tells Romina that “You don’t have to stay here … for this. You can just go.” To which she responds: “Yeah, I think it's a little late for that. I'm invested now. Besides … ” she says before picking up a nearby crowbar: “this is my house.” I wasn’t as wild about sputtering back-and-forths like when Chris tells Alan that “you’re dragging this off-base,” to which Alan says: "What base? I don't even know what grounds you're trying to stand on.” Then Chris screams: “Truth!” That was a bit much.

I was also somewhat disappointed by the movie’s generally slack action filmmaking. Most of the film’s gore scenes are choreographed and presented like a series of messy knockabout brawls, an approach that only really pays often when Carrer and Eveneshen, who also co-directed “For the Sake of Vicious,” happen upon a gnarly kill scene or two. I like geysers of blood and ocular trauma as much as the next guy, but “For the Sake of Vicious” is often not visualized or paced dynamically enough to keep one’s pulse up. So while Lucio Fulci fans may be delighted to see where Romina sticks her hammer, everyone else might struggle to get in the mood.

Still, “For the Sake of Vicious” is slightly more memorable for what Carrer and Eveneshen try to do than for what they fail to deliver. They’ve got (some of) the right ideas, but aren’t polished or as ruthless as they need to be yet. It’s probably telling that my favorite image from “For the Sake of Vicious” isn’t anything gross, but rather an almost screwball-style bit of physical comedy. During an especially heated fight scene, Chris and Romina bump elbows while trying to disentangle themselves from a pair of the above-mentioned masked killers. Weapons are put to good use, shower curtains are torn down ... and in the heat of the moment, Chris and Romina bump into each other like they’re competitive dancers in an unexpectedly cramped ballroom. That’s just a brief moment between bloodlettings, but it’s also light and canny enough to leave you wanting more. 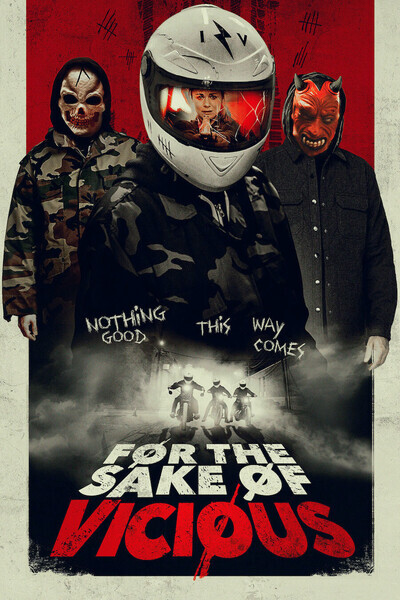