How do you make a documentary that matches the tone of someone as irreverent and essential as Del Close? While his name may not register as familiar in every household in America, anyone who ever even dabbled in comedy theater or improvisation, especially in the Midwest, knows about his impact. As a theater major and improv performer when I was young, Del Close was a legend. He was the man who revolutionized comedy. He took no prisoners. He changed the rules. He inspired literally hundreds of comedy groups around the world. He is on the Mount Rushmore of comedy. So how do you distill all of that into a documentary that feels as groundbreaking as its subject? Director Heather Ross struggles to avoid turning “For Madmen Only” into a talking-head documentary, but she succeeds through revealing Close’s difficult dark side too. After all, Del Close would have hated a puff piece.

Ross assembles a team of comedy legends, old and new, and they provide the bulk of the interesting insight into how Del Close changed comedy. Almost as a response to the safe misogyny of the humor of Bob Hope, comedy started to shift to something more ambitious and progressive than it was before Del Close came along. He taught people simple rules like be present in the scene, don’t go for cheap jokes, make unlikely choices, be intelligent, etc. These might sound obvious to generations raised on the talent shaped by Del Close, but it wasn’t a couple generations ago. He really rewrote the rulebook, blending his fearless anarchy into a new art form. He was one of the first people to assert that improvisational comedy wasn’t an element of other things but an actual art form of its own.

Through interviews, Ross deftly draws the line from Del Close’s early work with Elaine May through his Second City experience and all the way to how his approach to improv influences major comedy directors like Judd Apatow and Adam McKay. The latter is an interview subject along with legends like Bob Odenkirk, Dave Thomas, and George Wendt, along with current standard bearers like Jason Mantzoukas and Ike Barinholtz.

While I’m generally opposed to talking head documentaries, and think Close probably would be too, the level of historic insight into the form of comedy through these interviews make for the most effective segments of “For Madmen Only.” I really could listen to Bob Odenkirk talk about the history of comedy and his relationship with Close for an hour, and hearing about how it developed through another Chicago legend like Charna Halpern is equally rich. I also loved when the film dug into the art form of “The Harold,” which is basically long-form improv that I’ve never seen analyzed like this in a film, and a formative part of my college theatre experience. At its best, “For Madmen Only” reminded me the lessons I learned from a long-gone chapter of comedy acting that still influence who I am today.

Less effective are the recreations of when Close wrote a comic book for DC called Wasteland. As he recorded a lot of these segments, and revealed a lot about himself, Ross was clearly drawn to using Close’s actual voice, and recreates the creative process behind the book with James Urbaniak playing Close—I find it funny that he’s now played Robert Crumb (in “American Splendor”) and Del Close, a wonderful pair of counter-culture legends. However, this stuff is a little thin and repetitive. Stick with the experts, skip the comic.

Ultimately, “For Madmen Only” is essential for comedy fans and historians. It’s something that anyone interested in theater as a career or even anyone who does improv comedy on the weekends should check out on VOD. It almost makes me want to do improv again. Give me a profession, time period, and genre! 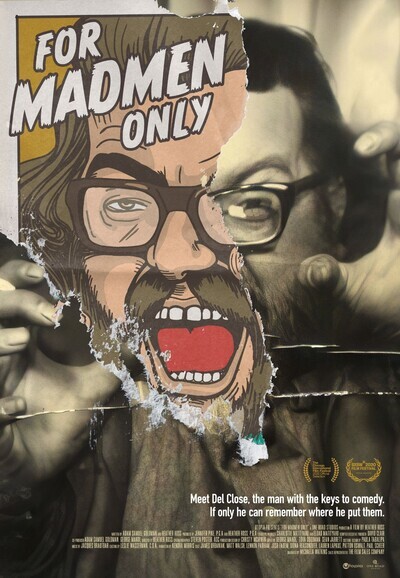