Do the makers of the surprisingly effective found-footage horror movie “Followed” know how funny their social media critique is? Their movie’s generic scare scenes are never as startling or cruel as any time Mike (Matthew Solomon), an obnoxious PewDiePie/Logan Paul-type vlogger, reminds us of his rinky dinky goal of earning 50,000 subscribers with tasteless videos about the Hotel Lennox, the haunted site of some grisly unsolved murders. I’m still shocked that “Followed” is as funny as it is given that Mike is as obnoxious as you might expect given his very online, anything-for-the-lulz persona. He’s a cartoonishly loud, entitled millennial who never stops reminding us that he only cares about the sound of his own voice. He’s also sometimes unintentionally hysterical?

Still, the darkest thing about “Followed” isn’t the movie’s grasping, and mostly underwhelming horror scenes, but rather Mike’s deathless drive to earn a $250,000 sponsorship from a Hot Topic-like boutique called “Haute Gothic.” Mike thinks that everything but money and status are meaningless, because he’s a caricature of a straight white 20-something. He’s so desensitized that he wonders aloud if he could pay a black guy $50 to do a back flip. Mike’s also the kind of character who, when he interviews a relatively serious true crime expert (John Savage) about the Hotel Lennox, can’t help but mug for the camera with snarky nonsense like “A devil worshipper, how cliche” and “Follow Satan, you will.” Kids these days, always with the Yoda jokes.

Mike’s comeuppance is inevitable, especially given the many scenes where he’s contrasted with Chris (Tim Drier), his appropriately meek lapsed Catholic cameraman. And, to be fair: the Hotel Lennox’s undead residents are somehow even more underwhelming given how much more effective the movie’s unsettling pregnant pauses are compared with its underwhelming jump scare climaxess.

So “Followed” isn’t a good social media critique, nor is it a clever variation on the “Screen-Life” horror-thrillers that Russian filmmaker Timur Bekmambetov has recently cornered the market on. Yes, “Creepypasta”-style Internet hoaxes are real enough, and YouTubers are often scuzzy morons who are both old enough to know better and too young to be taken seriously. But there’s only so much blood left in this well-tapped anti-vlogging vein, as is apparent during laughable interstitial scenes where an unidentified computer user breathes heavily while they upload Mike’s last known footage to his website. Take that, you unaccountable and (literally) mouth-breathing whippersnappers!

With all that said, “Followed” is often disarmingly mean, which goes a long way in these sorts of post-“Blair Witch Project” genre exercises. For starters, Mike is an irresistible target thanks to Solomon’s enthusiastic performance. Solomon makes it easy to imagine that somebody like Mike exists in real life, if only in small doses. He does a credibly unfortunate happy dance when Mike shows Chris and his fellow cameraperson Danni (Sam Valentine) to their room: #1428, the infamous residence of devil-worshipping serial killer David “Night Crawler” Olmos (Ethan Alexander). Solomon is also believably petulant whenever Mike tries to shock his friends with the grossest thing that comes to mind, especially when he suggests making shish kebabs after he spots an air vent that may or may not have been the final resting place of ex-lodger Meghan Kim (Sarah Chang), whose corpse was inexplicably burnt to a crisp.

Better still, Solomon whines like a champ whenever he has to deliver already preposterous lines of expository and/or declamatory dialogue. It’s honestly hard to tell if Mike is meant to be funny given how risible some of Chris’ dialogue can be, like when he scoffs that Mike’s group couldn’t possibly get “a good night’s sleep in this place” to which Mike understandably replies with a “nut tap.” But Mike’s funny on a regular basis, like when they discover a bloody eyeball (in his hands, no less!), and he tries to reassure his team that “It's probably from the same animal as the [rotting] tongue and the entrails” that they found earlier. Which is almost as funny as any when Mike complains about how uncooperative Chris is—“Are you seriously gonna ditch the vlog over one hotel”—or when he earnestly insists that, “My followers are expecting us to go into the basement.”

Mike’s lack of survival skills often makes his lack of character even more unfortunate: he notes that the hotel’s basement “does not smell good” right before a hail of mannequin limbs mysteriously hurl themselves at him. So while “Followed” won’t lead you to any conclusions that you can’t get reach by yourself, it’s sometimes fun getting there anyway. 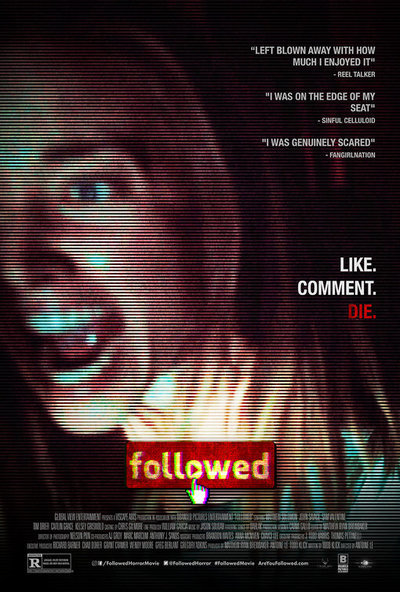