I imagine that only pre-teen and/or pre-existing viewers will enjoy “Fistful of Vengeance,” a feature-length spin-off of the hacky American Netflix martial arts series “Wu Assassins.” That’s not strictly a knock, since I, too, remember the siren call of drecky episodic TV that, despite its formulaic nature, can sometimes be satisfying anyway thanks to some sturdy high-concept narrative hooks and test-tube-manufactured good vibes. (I regularly tuned in for “Viper” and will gladly talk your ear off about “Manimal”). Unfortunately, I’m not a “Wu Assassins” diehard, and the quality of filmmaking in this spinoff isn’t strong enough to warrant even a mixed recommendation. “Fistful of Vengeance” is a movie in duration only; it’s pretty slapdash in terms of its execution, even during its glossy-looking action set pieces.

“Fistful of Vengeance” immediately overwhelms viewers with an ostensibly tongue-in-cheek voiceover recap of where the first season of “Wu Assassins” left off: Tommy (Lawrence Kao) tells a horny “jiangshi” energy vampire that he and two buddies, the super-powered assassin Kai Jin (“The Raid” star Iko Uwais) and their ride-or-die buddy Lu Xin (Lewis Tan), have traveled to Thailand to avenge Tommy’s dead sister Jenny, whom they all loved. Why Thailand? Because they traced ancient material from an old piece of stone to a Bangkok night club. And after killing some jiangshis, they quickly fall in league with shady tipster William Pan (Jason Tobin), an entrepreneur who can briefly stop time, command a private army’s worth of mercenaries, and also shoot glowing balls of energy out of his hands.

Pan has information on big-time crime boss Ku An Qi (Yayaying Rhatha Phongam), but he also has his own agenda. That’s not a spoiler, but rather an obvious bit of subtext given that Pan only introduces himself after he shows introduces himself using a video about his corporate outfit that includes the line: “We're not just looking to the future, we're looking to shape it.” There’s a little more emotional baggage weighing down this featherweight plot, but it ain’t much: Tommy hooks up with sassy local guide Preeya (Francesca Corney) while Lu Xin spars and then sleeps with Interpol Agent Zama (Pearl Thusi).

Everything in this scenario chugs along with perfunctory A-to-B efficiency and a general lack of imagination. There’s some above-the-waist nudity in one scene, a little gore throughout, and a few desperate “f” bombs scattered here and yon. A bunch of scenes are filmed with unremarkable color lens filters (this scene is amber; this one’s blue-ish, etc.) And there’s no chemistry between the main leads, which is especially unfortunate since Lu Xin tells Zama that “I can taste when you’re lying” right before they kiss while Preeya smooches an unsuspecting Tommy as soon as they meet up just to “get that over with.” These chummy jokes seem to write themselves, but most don’t really land: after driving a car through a glass door, Lu Xin quips “door says push, not pull.” Nobody laughs. “What?” he adds for balance.

The choreography has no momentum or flow either, and the over-edited action is more covered than directed. Whenever Uwais fights Phongam or whoever else, we have to see them from overhead, or maybe we should cut to a visually coherent chase that’s happening at another end of the building, or maybe the camera can move over here, which would coincidentally better highlight the VIE Hotel’s luxurious features or other on-location Thai sets. The filmmaking isn’t ever more than workmanlike, in other words, but fans of direct-to-video action probably won’t expect better from director/cinematographer Roel Reiné, whose credits include the watchable “Hard Target 2” and the unfortunate “The Man with the Iron Fists 2.” This movie’s built-in target audience might still enjoy Reiné’s latest since baddies get shot in the head, body parts squelch loudly, and metal goes schwing.

It’s hard to know how to criticize a movie like “Fistful of Vengeance” since it is very much what it is. There will probably be no second season of “Wu Assassins” and fans of that show may want closure. I don’t know that “Fistful of Vengeance” will give them much in that regard since it circles around the same points like a put-upon middle schooler who just barely meets bell-curve expectations. And when it’s all over, you’ll have gotten exactly what you paid for: a picturesque fish fry and a skin-revealing beach frolic following some passable beat-'em-up stuff. Maybe that’s your thing, who can say? 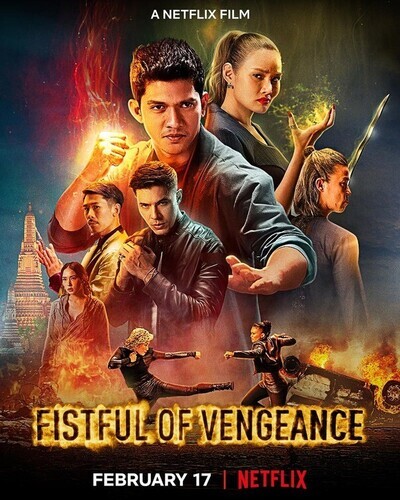 Rhatha Phongam as Ku An Qi