Takashi Miike’s “First Love” shows that even his type of excessiveness can have a breaking point, at least when it comes to dreams of balancing tight storytelling with massive character rosters. At some point, a plot can be so busy that its spectacle becomes superficial, a key glitch here within the manic pacing of “First Love,” scripted by Masa Nakamura. Though it has a tight course of events and is spiked with a few surprises, "First Love" is far more impressive for how it collides its many characters than what it ever feels for them.

Miike tries to hold all of his pieces together by giving them distinct tones—lead lovers Monica and Leo are characters seemingly picked from dramas about agony and despair. For the somber Leo (Masataka Kubota), this film becomes like Miike’s take on the hallowed cinematic metaphor of the boxer, showing someone who fights against the great sadnesses in his life, including him being abandoned as a child. But Leo's spirit is crushed when he randomly collapses during a match, the result of newly discovered brain tumor that’ll soon take him down for good.

Leo finds his mate—and a tone to match—with Monica (Sakurako Konishi). She too is haunted by the sadness in her past, related to a mysterious name that she cries out, and a departed father who appears in supernatural hallucinations, only wearing glasses and tighty whities. Like Leo, she has a death sentence of her own, in the form of a drug addiction that started when she became a call girl for the drug dealers her father was indebted to. Monica is so trapped by these problems that her current apartment is even used as a drug dealing hub.

But these two provide a hollow heart of the story, which is really a bumbling circus started by Kase (Shota Sometani) and a corrupt cop named Otomo (Nao Ohmori). Their plan involves Yakuza thug Kase hijacking a drug deal from his own people, and when he gets caught by Otomo, Kase will get out of prison in two to three years, after which the Yakuza and Triads will have (very likely) wiped each other out, and the money will be theirs. It seems like a good idea for about two or three minutes, but falls apart when Kase bungles his attempt to jump fellow gang member Yasu, and Monica (whose apartment Kase is going to rob) can’t be wrangled by Otomo, and Yasu’s girlfriend Julie (Becky) kills a Triad guy Kase had sent to stop her. In the mix, Monica is saved from Otomo by a chance encounter with Leo on the street, who uses his boxing skills to fight for someone else (something recommended to him by a fortune teller in a previous scene), and the two are on the run, with Otomo’s badge in their possession. I haven't even gotten to the different mob bosses soon put into the field, including a one-armed man who can nonetheless still pump a shotgun.

This is just the start of “First Love”’s nuttiness, its energy not emotionally immediate, just frantic. There’s always an encouraging ambition in any filmmaker throwing so many pieces together, and keeping them all in motion. But even the worst of similarly-designed Coen brothers movies know, for example, that it’s vital to make us care about the most clumsy of dimwits, and that they shouldn’t be merely chainsaws in a juggling act.

Miike hurls audiences into these different scenarios and for the first half or so challenges you to keep track of everyone’s significance, because there’s a big chase later involving everybody—and the Yakuza, the Triads, and the cops. He takes the viewer from one shadowy corner to the next, but the camera’s energy is oddly restrained to that of a quiet spectator, whether it's placed behind some clutter as Kase and Otomo assemble their foolish plan, or sitting on the ground across from Leo and Monica as they start a deeper connection. Setting up all the players, these dialogue-driven scenes at least become a strong indicator of the film's calibrated performances, and Miike’s ability to harness them with crisp editing (one explanation for how he’s amassed more than 100 films in his career).

Yet even as these various zig-zagging plot lines start to intersect, “First Love” amasses less chutzpah than you might expect. Every five minutes or so it’s a sequence of someone trying to get out of a tricky scenario, like when Kase is stuck driving a furious, vengeful Julie, with her being totally unaware Kase was the one who just killed Yasu. Happenstances throughout the story are used like narrative flourishes without greater meaning than to reckon with life’s casual absurdities—it’s funny when a gangster simply gets a leg cramp at probably the worst time in his life, but “First Love” doesn’t do anything else with it. Overt humor instead pokes through with only passing kookiness, like when new characters abruptly enter into the fray, and even sooner meet death.

“First Love” finds its footing in the third act, which takes place in an arena befitting the movie’s chaotic energy of characters being in the wrong place at the wrong time—a massive, labyrinthine hardware store with no (conventional) way out. As Miike bounces between emotional and comical beats, it’s constantly surprising about who is around each corner, and it sometimes leads to a Wild West shootout, or samurai sword duel. Some relief arises with this finale simply because Miike's expansive character roster starts to thin out, and it might even make you wish the film went even more over-the-top, now that there’s no reason for anyone to get out alive.

But any Miike fans looking purely for “Ichi the Killer”-grade insanity will be slightly disappointed in “First Love.” Sure, some heads get sliced off, and there’s an unexpected burst of comic book pizazz, but the movie can feel as sober as it is tangled. The wildness of “First Love” instead comes from its stunt-plotting, which uses a dying boxer and dumb drug thugs and even a nearly naked dancing ghost to careen toward a parting message about choosing life. It’d all be more poignant—or deeply amusing—if “First Love” didn’t feel like it ran out of steam before the punchline. 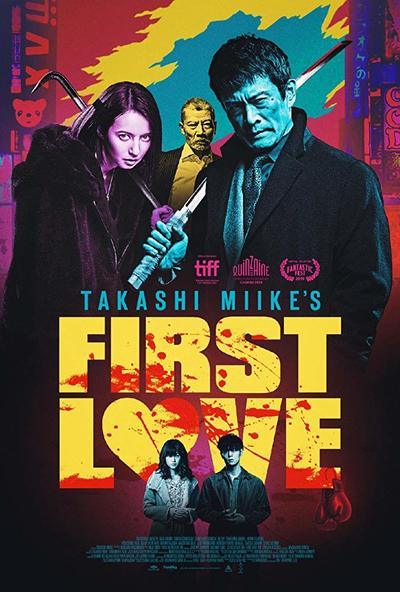