“Fireworks” is a strange little movie that attempts the tricky feat of combining comedy, drama, sci-fi and romance, but it doesn’t get those individual elements right so it never coheres as a whole.

Directors Akiyuki Shinbo and Noboyuki Takeuchi have come up with what is essentially a trippy, Japanese anime version of “Sliding Doors,” with a pair of teens reliving the same moments in slightly different ways over the course of a single day, thanks to a magical, mysterious orb. This might be more engaging if the characters were better developed—or developed at all, for that matter. The film especially strands the 14-year-old girl in the equation, who is nothing more than a beautiful pawn: a sexist notion of a damsel in distress in every single one of these scenarios. By contrast, the boy who saves her becomes more daring and heroic with each new version of events.

But at the film’s start, Norimichi (voiced by Masaki Suda) is a blandly ordinary teen. He complains about having to attend school in the summertime in his quaint coastal town, and he and his friends try to liven things up by racing each other down the hill on their bikes and skateboards. Once they arrive, it’s clear that they all lust after quiet, pretty Nazuna (Suzu Hirose), whom Norimichi first spies on the way to school standing forlornly on the shore, staring at the sea, the breeze ever so slightly lifting her short schoolgirl skirt. (It’s a skeevy running motif, as is depicting the leggy, flirtatious girl from behind.) But Norimichi’s rowdy pal, Yusuke (Mamoru Miyano) also finds time to hassle and humiliate their teacher over her huge breasts, a bizarre moment in a movie filled with them. Is “Fireworks” also an homage to those bawdy ‘80s sex comedies like “Porky’s” and “Private Resort”? Who knows?

Later, Norimichi just happens to run into Nazuna as she’s lounging by the pool in a bathing suit. The miniature orb she’d found on the beach that morning has now fallen into the pool, which somehow cosmically connects her with Norimichi. Where are we going with this? All over the place, but also, nowhere at all. Inexplicably, Norimichi figures out he can alter events by throwing the small, sparkly ball into the sky and making a wish. He uses this power to help Nazuna run away from her vaguely unhappy home life, which mainly consists of the same escape with slight tweaks along the way.

“I’m a bad girl,” she tells him teasingly after she’s changed out of her uniform and into a tiny sundress. “Like mother, like daughter.” But that cliché only gives way to another: the old-fashioned notion of a fairy-tale wedding between the two, and a happily-ever-after for this would-be princess.

Playing with time within this kind of evolving narrative structure—as in “Sliding Doors,” or “Edge of Tomorrow,” or “Doctor Strange”—can be both entertaining and enlightening, providing a variety of perspectives on a story we thought we’d come to know. In “Fireworks,” though, the result provides no new meaning. There’s so little to this story that it just becomes increasingly repetitive and boring.

But the worst part is that in every new timeline, we still have to listen to Norimichi’s friends argue over whether fireworks are round or flat when they get shot into the sky. You see, this strange scenario takes place on the day of the town’s annual fireworks extravaganza at the lighthouse. Hence, the title. Ostensibly, this conversation is a reference to the way the film toys with perspective, but it’s mind-numbing the first time, and we’re forced to hear it over and over again.

The actual fireworks are quite lovely, by the way, as are some glimpses of flowers blowing in a meadow, water droplets from the sprinklers falling on grass—the sort of imagery that makes anime so transporting and delightful. “Fireworks” may think it’s taking us somewhere, but we are eternally stuck in the present. 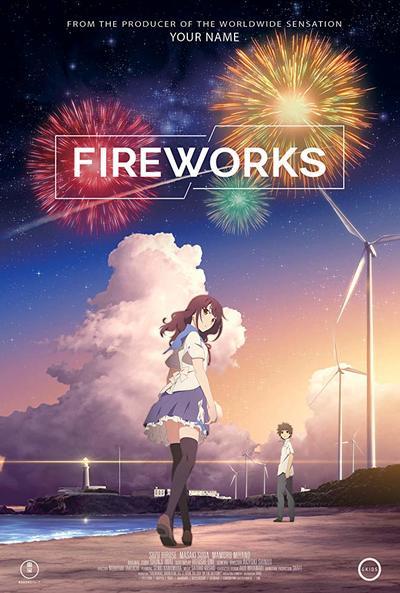