Clint Eastwood's “Firefox” is a slick, muscular thriller that combines espionage with science fiction. The movie works like a well-crafted machine, and it's about a well-crafted machine. The “Firefox” of the title is a top-secret Russian warplane capable of flying six times the speed of sound while remaining invisible on radar. Eastwood's mission, if he chooses to accept it: Infiltrate the Soviet Union disguised as a Las Vegas drug smuggler, and then steal the Firefox by flying it to the West.

This is one of those basic movie plots that can generate a lot of entertainment if it's handled properly. “Firefox” knows the territory. It complicates things slightly by making Eastwood a Vietnam veteran who is sometimes overcome by the hallucination that he's still in combat. The movie calls it Post-Combat Stress Syndrome. But the CIA man who recruits him explains that the government isn't much worried, because you don't have the syndrome while you're in combat, you see, but only afterward. Somebody ought to compile a textbook of psychology as practiced in movies.

Anyway, Eastwood trains for the mission, is disguised with a mustache and horn-rim glasses, and survives some uncomfortable moments at Moscow customs before he makes it into Russia. Then he makes contact with a confederation of spies and double agents who lead him to a Jewish dissident who is such a brilliant scientist that he is still being allowed to work on Firefox. Why does the dissident want to work on it? Because he knows how Eastwood could steal the plane. All of these scenes include obligatory shots, which are kind of fun to anticipate, if you're a fan of the Alistair Maclean-James Bond-"Mission: Impossible"-“The Guns of Navarone” genre. The one indispensable scene is probably the Introduction of the McGuffin. A McGuffin, you will remember, was what Alfred Hitchcock called that element of the plot that everybody thinks is important. In this case, it's the Firefox, a long, sleek, cruel-looking machine that looks like a cross between a guided missile and a DeLorean. Eastwood and the camera circle it lovingly; this is the sexiest shot in a movie without a romantic subplot. The movie's climax involves Eastwood's attempt to fly this plane north to the Arctic Circle, make a refueling rendezvous, and then take it on home. His flight is intercut with comic opera scenes involving members of the Russian high command, who argue and bicker while looming over an illuminated map that casts an eerie underlight on their faces, making them look like ghouls from old E.C. comics.

Does Eastwood make it out in one piece? Does he bring along the plane? I wouldn't dream of giving away the plot. But I will say that the movie's climax is a sensational high-altitude dogfight between two different Firefoxes, and that as Eastwood occupies the Firefox cockpit, surrounded by video screens and computer displays of flight patterns and missile trajectories, it looks as if Dirty Harry has died and gone to Atari heaven. The special effects are really pretty good in this movie. The planes looked surprisingly real to me, and the choreography of the dogfight was not only realistic but understandable. There's one sensational chase sequence that's an homage to “Star Wars”. Remember the “Star Wars” scene where the two ships chased each other between the towering walls of the city in space? Eastwood and his Russian pursuer rocket through a crevice between two ice cliffs, and it looks great even while we're realizing it's logically impossible. I guess that goes for the whole movie. 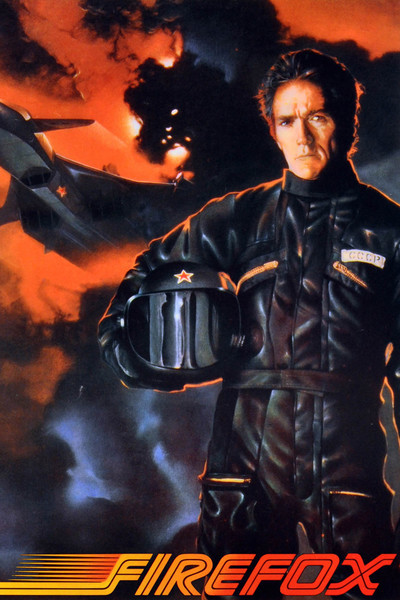