This Italian documentary is the official submission from that country for the next Academy Awards. The reaction to this from certain Italian fiction filmmakers has been not unlike the consternation certain novelists have expressed about Bob Dylan being awarded the Nobel Prize for Literature. But, Paolo Sorrentino’s soreness notwithstanding, this is a pertinent gesture, one of self-criticism, even. For “Fire at Sea,” in a sense, chronicles an Italian failure. An Italian failure that is, arguably, shared by the rest of the Western world.

Lampedusa is, per Wikipedia, the largest island of the Pelagie Islands in the Mediterranean Sea. Its closeness to Libya makes it a relatively desirable landing point for African and North African refugees fleeing from wars, unrest, and starvation on that continent. “Relatively” desirable because, as the movie shows in patiently unfolded detail, there’s really very little upside to being a refugee.

Directed by Gianfranco Rosi, the movie begins with a text that reels off some numbers: 400,000 migrants, 15,000 deaths. Such big numbers are hard to see as anything but abstractions. Rosi then cuts to some beautiful, peaceful imagery. Giant radio antennas revolve in front of a dramatic sky full of grey clouds over an undulating sea. A radio DJ says some calming words. It doesn’t seem like a deadly environment.

The movie doesn’t use any narration; the opening text is all the hand-holding the viewer gets. Rosi instead homes his camera on narratives pertaining at first to the natives of the island. A compassionate doctor is seen treating patients who clearly aren’t locals. He bemoans the indignities they suffer, and their deaths. A young boy, a neighbor of the doctor, makes slingshots using medical rubber bands and takes them to a local field to shoot with his pals. Soon there are shots of choppers and a boat. The latest batch of migrants is here.

“They’re drenched in diesel,” one coastal patrol worker says, examining a few people who have come off a boat. “If I flicked a cigarette lighter in here the whole room would go up.” The underfed migrants, who mostly look down at their feet as they meet the people into whose hands they’ve placed their fates, grow voluble after a while. In a holding cell, one of them speak-sings of his journey here, from Nigeria. “We drank our piss to survive,” he wails, both proud and miserable. The doctor continues treating these folks, one by one. The young boy, Samuele, is diagnosed with lazy eye and wanders around with an eyepatch. The sea is always there, ready to deliver new shipments of humanity.

Rosi’s film is thoughtful and well-constructed. It doesn’t strive for the epic feel of Visconti’s “La terra trema,” the 1948 epic about Sicilian fisherman that’s been an inescapable influence on Italian film. Its intimacy is a boon. But as laudable as the movie is, it does not quite achieve greatness. That’s the fault of both its indirectness and its obviousness. The portrayals of life in Lampedusa that don’t touch on the migrant crisis have a distance from the subject matter that seems a little besides the point at times. As for obviousness, there’s a scene in which Samuele and his friend are in a field using their new slingshots to shoot projectiles at cactus plants. After doing considerable damage to one of the plants, Samuele tries to make up for it by putting a mutilated plant back together using electrical tape. As they used to say in The New Yorker, “block that metaphor!”

The words offered by the physician about how we as humans ought not allow our, if you’ll pardon the phrase, brothers and sisters to suffer as these migrants do is the picture’s ultimate takeaway, and a worthwhile one. While furiously stoked myths of otherness are threatening to suck our civilization down a whirlpool of paranoia, “Fire At Sea” argues that the only race on this planet is the human one. 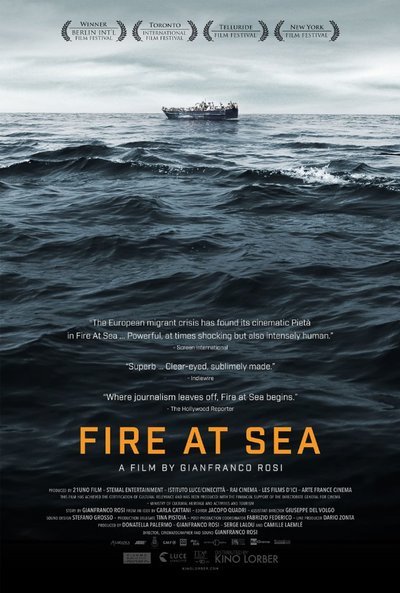