The spirit of Claude Lanzmann, whose monumental “Shoah” remains a nonpareil cinematic text on the Holocaust, lingers over and around “Final Account,” a film assembled by Luke Holland around interviews he conducted beginning in 2008. His aim, it says in a title card, was to track down and interrogate the last surviving “witnesses to the crimes of the Third Reich.” He found more than witnesses, but arguable perpetrators.

The movie begins with a familiar quote from Primo Levi: “Monsters exist, but they are too few in number to be truly dangerous. More dangerous are the common men, the functionaries ready to believe and to act without asking questions.” And soon, on the soundtrack, an old man singing a song, translated from the German in subtitles: “Sharpen the long knives ... so they go better in the Jewish belly.” This interview subject is shocked and appalled that he was taught to sing this as a kid. Other older former Hitler Youth and such are hardly so abashed.

Holland nods to Lanzmann with shots of train tracks, some of which are almost identical to what we see in “Shoah.” But in other respects his approach is, while not quite antithetical to Lanzmann’s, at least different. For the first part of the movie, Holland introduces his interview subjects in an almost breakneck style and alternates their reminiscences with archival footage. One interviewee talks of his mother and father voting for Hitler, and cites “unemployment and inflation”; an old woman, Marianne Chantelau, begins on a defensive note: “We were eleven years old, what do you want?”

The quick introductions to these figures is almost head-spinning, a marked contrast to the slow-burn interviews in Lanzmann’s films. At first I felt a little put-upon, but the aggregation of multiple details forms a terrifying and hideous picture. Holland at a certain point introduces specific locales, ranging from a little-known psychiatric hospital turned death chamber and eventually opening up to more notorious sites such as Bergen-Belsen. To hear one interviewee discuss the economic benefits of having a concentration camp in the neighborhood is chilling. So too are the various “we thought they were political prisoners” rationalizations of several others.

Worse than those who rationalize are those who, to this day, or until 2008 at least, stand by their Fuhrer. “I will not blame the Hitler. The idea was correct,” sniffs one man. But the Holocaust, too, Holland asks. This gives the fellow slight pause.

Hermann Noth, a former Waffen SS officer, strenuously protests at the very idea that his kind were responsible for any of that Final Solution business. No way! “We were frontline soldiers, we had nothing to do with the camps,” one former soldier says, puffing with pride. He rhapsodizes about the very special camaraderie of he and his fellows, conveniently skipping the atrocities committed by the self-same Waffen SS in Russia. “There was nothing that could go wrong,” Noth asserts. Well, except losing the war, which they did, thank God.

Conscience does prick at other subjects though. “They were the perpetrators,” one man reflects, and on reflecting further, says “I feel like a perpetrator.” For all that, though, his observation that “Nobody walked away” remains a shudder-inducing last word. 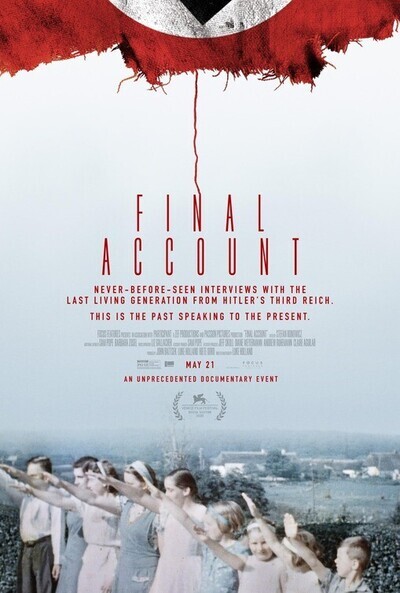