Are you a Peter Frampton fan? And when I say "Peter Frampton fan," I mean a BIG Peter Frampton fan. I mean someone who goes back farther than his once-universally beloved 1976 hit double-LP "Frampton Comes Alive." I mean someone who maybe goes as far back as The Herd with Frampton, although not necessarily. I’ll cut to the chase. Are you someone who knows the 1973 album called "Frampton’s Camel," and a track on it called "White Sugar"? I’m asking this question because, if you are, and if you do, you can pretty much skip the movie "Fed Up," because Frampton’s song "White Sugar," the chorus of which condemns the titular substance as "evil as the day you were born" sums up the message of the new documentary "Fed Up" in a nutshell, or a teaspoon if you will.

I don’t mean to be glib. Or maybe I do. As someone who’s struggled on and off with weight issues ever since my metabolism betrayed me in my mid-twenties, I suppose I’m in some ways a member of this movie’s target audience as an examination of America’s rising obesity stats and of the food industry’s economic interest in encouraging, or even enforcing, unhealthy eating habits.  Over the course of its ninety or so minutes, "Fed Up," executive produced by Katie Couric (who also narrates) and Laurie David, and directed by Stephanie Soechtig, offers up a lot of information about nutrition and the food industry, some of which I didn’t know or had an only vague awareness of, and alternates talking head interviews with PhDs with mini-portraits of poignant obese kids and teens across this great land of ours. Along the way it explains why the magic words "low fat" aren’t so magic, how the calories from an almond metabolize differently than the calories from a sweetened soft drink, and why high fructose corn syrup and, yes, white sugar is as evil as the days they were born.

"I don’t think high-fructose corn syrup is a good use of corn," former President Bill Clinton muses at one point in the film, going on to admit that his administration could have done more about this issue. (Is it just me or has Clinton said that about a LOT of things his administration ended up not doing much about? Hell, and I like the guy.) The movie pulls few punches in condemning collusion between the food industry and Congress and the U.S. Department of Agriculture, and even Michelle Obama’s anti-obesity initiative—supposedly, if you read National Review, a sacrament for liberals— comes in for criticism for emphasizing the wrong sides of the issue.

The information is arguably compelling, and disturbing, but something about the whole delivery mode turned me off. As cinema, the movie is profoundly uninspired and commonplace, albeit well-made, or even slick. I’m not sure whether the filmmakers knew that their slo-mo shots of sugar in heaping teaspoons is actually kind of mouth-watering, but there you go. More irksome is the fact that Katie Couric and Laurie David, both of whose personal fortunes were achieved with no small participation from the Coca Cola Company, have now decided to impart to us peons that the Coca Cola Company is in fact the devil. When, in fact, the Coca Cola Company is merely doing something that a larger system aggressively enables it to do. Like most movies of its bent, "Fed Up" can’t admit the thing that Al Pacino gets so tetchy about at the climax of "And Justice For All...," which is that "the whole system is out of order." It can’t—won’t—see the forest for the trees, because it is in fact a product of the same system that produces Coca Cola. Why the viewer ought to trust it more than it trusts the Coca Cola Company is a question left unanswered. Anyway, I trust Peter Frampton. 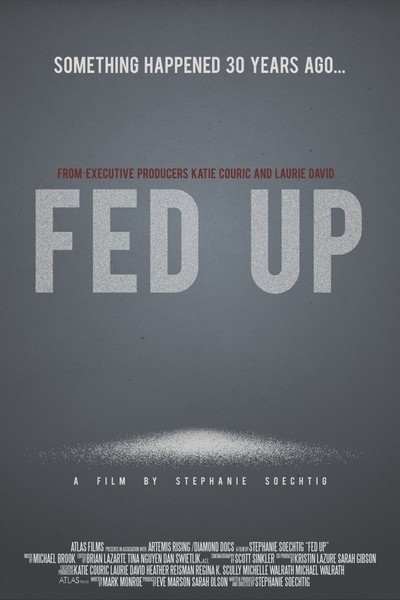