Father of the Year

The arrangement between Adam Sandler’s Happy Madison and Netflix keeps rolling, resulting in this week’s “Father of the Year,” the kind of quickie comedy project that was clearly conceived, executed, and released in an incredibly small window of time. It’s not as abrasively awful as the worst of Netflix/Madison projects (“The Ridiculous Six” still holds the standard), it’s just forgettable. It’s akin to a mediocre sitcom you might catch on network TV on a Monday night. You won't hate the experience of watching it, but you’ll forget you saw it before it’s even over.

David Spade does what is basically a riff on his Joe Dirt character as a hard-drinking, not-too-bright guy named Wayne, father to a sweet kid named Ben (Joey Bragg). Ben has come home with his best buddy Larry (Matt Shively) and the two young men have one of those drunken conversations about whose dad would win in a fist fight. Larry’s dad Mardy (Nat Faxon) is the polar opposite of Wayne—he's a scientist who is so meek that he’s being bullied by his own eight-year-old. So it’s either the guy so dumb that he builds a makeshift pool in the flatbed of his neighbor’s truck or the one being owned by a third grader. When Wayne hears word that the guys think Mardy is the likely winner, he takes it as a personal affront and challenges the father of his son’s BFF to an actual fight. It doesn’t go well.

If you’re wondering how on Earth two dads maybe fighting each other could sustain the plot of a film, you're already asking more pertinent questions than the filmmakers. There are other subplots, of course, including a potential relationship between Ben and a girl from his past named Meredith (Bridget Mendler) and the fact that the fracas between Wayne and Mardy might cost Ben his future. For the most part, however, the plot here is just one of those Happy Madison skeletons on which to hang bits such as Wayne and Ben participating in a weird local “Wife Race” and Mardy getting high and begging the dealer to take off his clothes (don’t ask … it’s a really weird scene, even for Happy Madison).

To be fair, there are a few funny moments scattered throughout “Father of the Year,” and some of the performers here are undeniably likable. The young actors, particularly Mendler and Shively, could easily work in better material, and I’ve always liked Faxon—the idea to contrast his more buttoned-up comic timing with Spade’s anything-for-a-joke aesthetic isn’t a bad one. It’s just that this is another one of those Happy Madison movies that doesn’t put any effort in after the clever idea was greenlit. You can always picture someone saying, “Just put Faxon and Spade in the movie and it will write itself.” And that’s how you get to so many scenes that feel lazy and jokes that simply haven’t been punched up. It’s just too lazy to work.

And yet people will probably watch it. Spade was on Howard Stern this week talking about how many people watched “The Do-Over,” and the excellent interview got me hoping again that perhaps this would be the Netflix/Madison project to finally work, the one that could make this whole collaboration worthwhile. That’s one of the reasons that I keep coming back to these movies (I’ve reviewed all five so far) and, believe it or not, I still hope every time that this one will finally be a diversion I can recommend to just get away from the real world for an hour or two. It’s not my fault they keep letting me down. 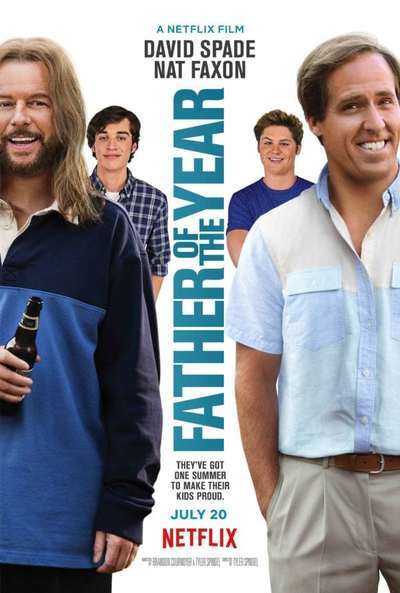