After its premiere at Cannes in 2019, the press around Werner Herzog’s “Family Romance LLC” centered on the unique, experimental nature of the film, but it’s really very much in keeping with themes that the master filmmaker has explored for decades. A director who has often analyzed the presence of artifice in society and has blurred the lines between documentary and fiction filmmaking has delivered a film that leans into both of those aspects of his career. A hybrid experience that features a protagonist doing what he does in reality but with an improvised, fictional spin, “Family Romance LLC” may be a unique piece of filmmaking when compared to the landscape in 2020, but Herzog has thrived by pushing the envelope in terms of what a film should be for a long time now. The theatrical release of “Family Romance LLC” was canceled after the pandemic, and it’s premiering on Mubi this weekend. Fans of Herzog—and that really should be all of you—should seek it out.

A man in a perfect suit waits in Yoyogi Park for someone as Herzog’s camera captures a girl who has walked past him multiple times, scoping him out and waiting to approach. Immediately, Herzog is thinking more like a documentarian. It’s clear most people in the park are not extras, but just people going about their lives. The camera regularly wanders away to the cherry blossoms or people playing in the park. But it keeps returning to the man, who is named Yuichi Ishii and the 12-year-old girl he is supposed to meet named Mahiro. Yuichi tells Mahiro that he is her missing father, someone she hasn’t seen in years and barely remembers. It is an awkward, touching reunion. None of it is real.

It turns out that Ishii owns a company called Family Romance LLC, from which people can “hire” family members. Are you in a situation where the father of the bride is too alcoholic to attend his daughter’s wedding? Call Family Romance. The business is real, and Yuichi Ishii is its actual owner. At the request of Mahiro’s mother, he’s pretending to be her father to offer emotional support and report back on how she’s doing to mom.

Herzog is clearly fascinated by the entire concept of surrogate family members, and his direction here uses it in an unexpected, loose way. Reportedly, much of the dialogue was improvised, and the filmmaking feels similarly organic and on-the-fly. Scenes go on too long, awkward moments are allowed to hang in the air, conversations are filmed from one angle with no coverage—"Family Romance LLC" often looks and feels like it’s capturing reality more than filmed storytelling, and the metatextual approach enhances the entire experience. Ishii is a man who pretends to be other people, who is pretending to be himself in Herzog’s film. It’s a fascinating Möbius strip of reality and fiction.

Even as Yuichi starts to express existential concern about his chosen profession—“Every day, I feel uneasy”—Herzog refuses to succumb to traditional narrative melodrama. He not only knows that audiences will be aware of the many odd conceits of his film but uses those to his advantage. When a phone rings during a meeting with an oracle, it clearly wasn’t intended, but Herzog didn’t retake the scene. He lets life intrude, breaking the illusion of filmmaking in the same way that the people who hire Ishii’s company often know it’s not “real,” but they go along with it anyway. It becomes a film about the everyday artifice that so many people use to get through life. Ishii even questions if maybe someone hired his parents. It’s about the lies we tell ourselves from both sides of a relationship and how they can become truth. Ishii starts to care about Mahiro, realizing the façade impacts him as much as his clients.

Herzog also captures the beauty of Tokyo in wide shots over the city and as his camera roams Yoyogi Park. In those sequences, he’s often drawn to people playing pretend, including a group of wannabe samurai—modern kids playing with pretend swords, even feigning death and seppuku. Herzog has often filmed documentaries in a manner that felt like fiction and made fictional films that hinge on the true stories of the cast or production. What defines a documentary has been a hot topic at festivals for the last few years with the hybrid work of people like Robert Greene and the Ross brothers. It’s nice to see one of history’s best filmmakers still experimenting with that question. 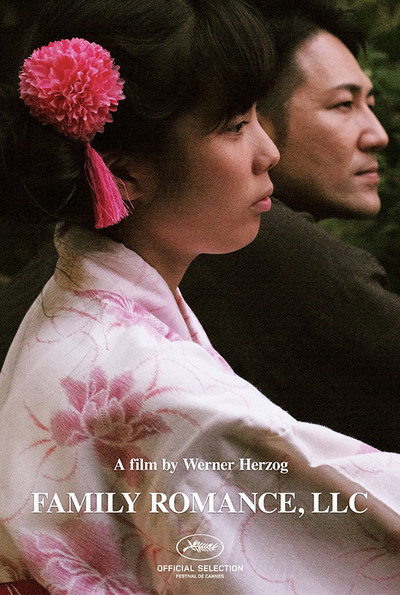