Scott Mann’s “Fall” belongs to the trapped horror subgenre of films like “The Shallows” and “Open Water,” but it takes a dynamic that usually unfolds in the middle of deep water to thousands of feet in the air. Mann and co-writer Jonathan Frank have a clever concept that results in a film that should be avoided by anyone with even the mildest vertigo—I wouldn’t say I’m particularly afraid of heights but there are some scenes that made my stomach turn a bit. You’ve been warned. Sadly, the concept only takes “Fall” so high, and the execution, including some ineffective acting, editing, and other technical choices, makes this a misfire. It doesn’t exactly crash to Earth as much as drift off into the forgettable air of film history.

Becky (Grace Caroline Currey), husband Dan (Mason Gooding), and Becky’s BFF Hunter (Virginia Gardner) are climbing a sheer mountain face in the opening scene when tragedy strikes and Dan plummets to the ground below. A year later, Becky is drowning her grief in a bottle, avoiding Hunter and her worried father James (Jeffrey Dean Morgan, taking a part so small that it's like a favor to a friend). One day, Insta-star Hunter comes to Becky with a proposal: They’re going to climb an abandoned 2,000-foot TV tower that’s basically in the middle of nowhere, from which they will find closure and spread Dan’s ashes. Of course, it goes very wrong, leaving Becky and Hunter stranded on top of the tower with no way down and no way to communicate with anyone who might be able to save them.

Filmed in the Mojave Desert, the vast majority of “Fall” takes place on the tower, and the film admittedly gets some nice adrenaline from the initial climb and disastrous ladder collapse that follows. In fact, there’s a better version of the film that starts right with the climb, allowing the characters’ trauma to arise through their conversations on the way up instead of with a horrendous set-up act that’s filled with clichés and poor filmmaking (it also would have helped reduce the runtime on a 107-minute movie that should be closer to 87). When Becky and Hunter begin their actual ascent, Mann has his firmest grip on the movie, building tension in a way that can be pretty effective.

And then “Fall” stalls again. Hunter is given a secret that's more like melodrama than realism, vultures and drones get involved, and the movie gets increasingly silly through its final act. The best “trapped” films usually rely on realism, making viewers feel like they’re actually trapped in the rocky waves of a film like “Open Water,” and “Fall” crumbles under that analysis. Currey and Gardner give committed performances in physical terms—it looks like an exhausting production—but they’re saddled with juvenile dialogue that doesn’t capture the terror people would really feel in this situation. “Fall” only works if we believe the predicament in which Becky and Hunter are trapped, but the thin dialogue, showy cinematography, and overzealous edits betray the potential of this nightmare.

Ultimately, “Fall” has been designed to be seen on as a big a screen as possible, which is why Lionsgate is going wide with it this weekend instead of shuffling it off to VOD. Much has been written about getting ticket buyers back into theaters with event movies that demand the theatrical experience. It's too bad this effort to help keep the theater industry aloft will only let viewers down. 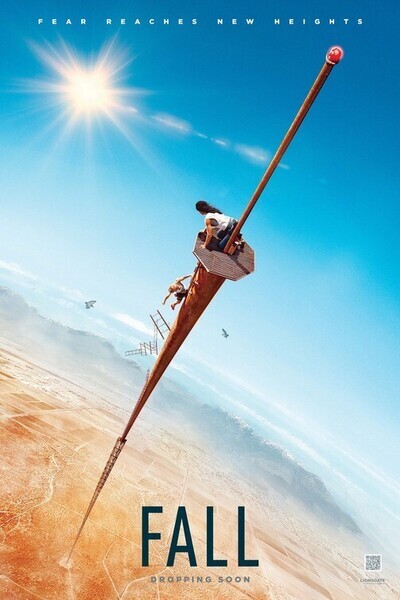