When we first meet John "Falcon" Chapman (Michael Jai White) in "Falcon Rising," (the first installment of what is clearly meant to be a franchise, directed by Ernie Barbarash), he is playing Russian roulette with himself in his hovel of a New York apartment, all as brightly colored fish swim around in a tank behind his head. It is Rocky Balboa bleak. He is an alcoholic. He suffers PTSD flashbacks of the carnage he saw in combat.

That all changes when his sister (Laila Ali) is beaten nearly to death in the favela in Rio de Janeiro where she volunteers as a social worker. Falcon flies to Rio, calling in help from an old war buddy (Neal McDonough) who works there in the U.S. consulate. Falcon begins his own investigation into his sister's attack, asking uncomfortable questions in the favela, and uncovering a corrupt system that goes to the highest levels. A throwback to 1980s action films, with strong men at the center going up alone against an unambiguously evil foe, "Falcon Rising" is an entertaining film with a thrilling physical performance from Michael Jai White.

Barbarash thrusts us into the chaotic and colorful atmosphere of the sprawling favela in Rio, little kids playing soccer, teeming warrens of fruit stands, little shrines for the dead stuck in the walls, blue-green waves crashing on the beach at the end of every alley. It is a crowded and suspicious community, harassed by the police force, and untrusting of outsiders. Falcon teams up with Officer Da'Silva (Millie Ruperto), who works security in the favela. She knows everybody and tries to build trust with the residents. Her compassionate outlook stands in stark contrast to Tiagho Santo (Jimmy Navarro), a Rio cop with a messianic complex who refers to the people in the favela as "animals" and savages", guilty until proven innocent.

Falcon, still so jittery from PTSD that he pulls a gun at the sound of a car backfiring, manages to take on the entire police force, not to mention a roving band of evil Japanese gangsters running a child prostitution ring. He takes time out of the investigation to sit by his sister's bedside in the hospital, lost in his own world of pain and revenge. It's a good performance, unsentimental, spare, and almost thoughtful.

The fight scenes are numerous, and often feature Michael Jai White in a position where he is totally outnumbered. There's one great fight where Falcon takes on five Japanese gangsters simultaneously. The gangsters all wield guns or swords, and Falcon only has his fists and a hard briefcase that he swings around like Thor's hammer. Michael Jai White leaps and spins and kicks, flying through the air, in direct contrast to his morose personality from the opening of the film. It's thrilling. Barbarash does not use a quick-cut editing style for these fight sequences and it's one of the reasons why they all work so well. What you're seeing is good old-fashioned fight choreography (Larnell Stovall was the stunt coordinator and fight choreographer) done brilliantly by world-class people.

There is little ambiguity here, but "Falcon Rising" doesn't need ambiguity. All it needs is a plot, a bunch of well-shot fight sequences, and some degree of emotional suspense. It has all of that, as well as a compelling central character in John Chapman. Falcon is a reluctant hero, having removed himself from involvement with life at the start of the film. But when the chips start to fall, and the gangsters start to come at him, he engages, not just with the investigation, but with his own survival instincts and will to live. A successful franchise depends on the hero at its center. Is the hero's personality interesting enough to warrant more? Time will tell, but "Falcon Rising" is off to a good start. 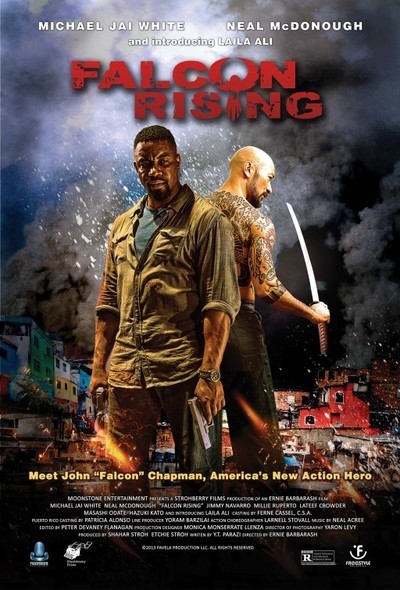 Rated R for violence throughout, and some sexual references/content