Producer Bradley Jackson’s directorial debut, "Facing Nolan," is a baseball fan’s dream come true. With the screams and roars of the crowd, the energy of the games, and the bullish presence of the legendary Nolan Ryan, director Jackson makes you truly understand what it is like to be a fan.

Opening with a television on a baseball field, Jackson's documentary reminds the audience that this story is about more than just a legend. For the uninitiated, the film follows the life and career of former Major League Baseball pitcher Nolan Ryan, or the Ryan Express, as described by the players who had to face him on the field.

Unlike traditional sports docs, "Facing Nolan" opens with the end of Nolan’s career. The filmmakers quickly run down the accomplishments of this 27-year run. We watch Ryan sprout from the youngest child of six in a small town uninterested in pursuing a long-term career in baseball to a living legend with the highest strikeout total in the game. Then we introduced to Nolan Ryan, the man. He was a hell of a pitcher, but also a farmer at heart. Beyond the numbers, and greater than his legacy, this film is interested in the humanity of Nolan.

"Facing Nolan" is a reminder that once the field lights fade and the crowds grow silent, the players go home. To have a player go back to their normal lives and find odd jobs, like Nolan installing A/C and central heating in his early off-season, is a reminder to a young audience that their dreams are still attainable. Anything is possible.

Nolan is a beacon of hope—the ol’ Texas Ranger that stood his ground and held his head high.

As Nolan’s former teammates and colleagues gush about his talent, he sits there calmly and smiles. Whenever we see Nolan on-screen he talks about the smaller moments. Nolan Ryan, the family man, stands at the forefront. As an audience member, I felt like I was watching my own father as he navigated low pay and his responsibilities. Nolan’s family drove his every decision. His drive to love and protect them was the backbone to an extraordinary career in baseball.

"Facing Nolan" is a heartfelt documentary shows how even a sports god is still a man. Former President George W. Bush sums up the film best when he says, “Ultimately, in life, you can have success on the field—but really what matters, in the long term, is a good set of values.” "Facing Nolan" is one of the most inspirational stories of the year.

Now playing in theaters and available on digital platforms on July 19th. 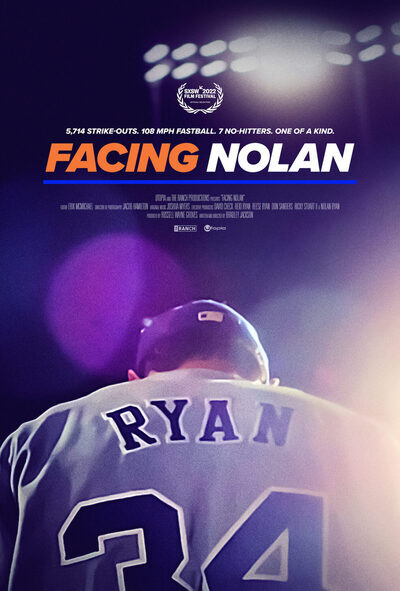