Few actors feel as present as Benicio Del Toro, a performer that doesn’t play-act, he embodies the characters he portrays. In “Escobar: Paradise Lost,” Del Toro could be playing with children in a pool or ordering a young man to commit murder, and he performs both scenes with the same genuine intensity. He has such a keen awareness of his surroundings, whether it be his co-stars, shooting location, or even the few pounds he put on to play someone as larger than life as Pablo Escobar. He’s really very good here, as he almost always is, no matter the quality of the film around him. The rest of the movie? Not so much.

“Escobar: Paradise Lost” suffers from the same problem as “My Week with Marilyn,” “Me and Orson Welles” and “The Last King of Scotland,” three films that also chose to capture legendary figures through the eyes of a relatable innocent. So, instead of a biopic of Pablo Escobar starring Benicio Del Toro, we get a fictionalized tale of a Canadian transplant who stumbles into Escobar’s circle of influence when he marries Escobar’s beloved niece starring Josh Hutcherson. Basically, the protagonist is nowhere near as interesting as the title character, and so whenever Del Toro is off-camera, which is more than half the film, we feel his absence to the degree that one wonders if the film wouldn’t work better without the true figure behind it. We have different expectations for casting as perfect as “Benicio Del Toro as Pablo Escobar” than we do from “Josh Hutcherson as Some Dumb Canadian.”

Nick (Hutcherson) just wants to hang on the beach with his brother (Brady Corbet) and his family. They build a surf shack in the middle of nowhere. Bro will cook; Nick will teach surfing. It truly will be paradise—and debut director Andrea Di Stefano does a solid job of conveying the beauty of this part of the world. One day, Nick runs into a lovely young woman named Maria (Claudia Traisac), who asks if he’s going to bring more “Yankees” down to their part of their world. Nick politely corrects her; he’s Canadian. Nick is very polite.

Nick is also a tad naïve. When Maria introduces him to her rich uncle Pablo Escobar, Nick doesn’t exactly ask the right questions. He does happen to wonder aloud how Uncle Pablo has so much money, to which Maria casually answers, “Cocaine.” Huh? You don't say. Not long later, Nick mentions over polite conversation that some local thugs have been giving him and his brother trouble, including attacking Nick with a violent dog (in a harrowing scene). Anyone who’s seen a movie will know the thugs end up dead. And then Nick happens to be on the Escobar estate on a day that he’s not supposed to be there, and things get really bad.

The second half of “Paradise Lost” is actually a pretty robust thriller, especially a centerpiece action-suspense scene in which Nick struggles to keep his head above water as the world is crashing around him. There’s a harrowing phone call or two and some really strong sense of setting, buoyed by confident direction, especially for a first-time director. Here’s the moment where I realized that it’s not Josh Hutcherson’s fault that his character doesn’t really work, and not really even Di Stefano’s, but the fact that this is two movies grafted into one. On one hand, we have a true story of crime and poverty bringing down paradise on Earth. On the other, we have the story of an innocent caught in a web of violence. Both films kind of work, and both films are lessened by the way they are smashed together here. Were this just a straightforward, fictional thriller, it might be pretty effective.

But it’s not. The name is right there in the title. And every time that Benicio Del Toro shows up as Pablo Escobar, we’re reminded of the movie that this could have been, making it easier to criticize the movie it chose to be instead. 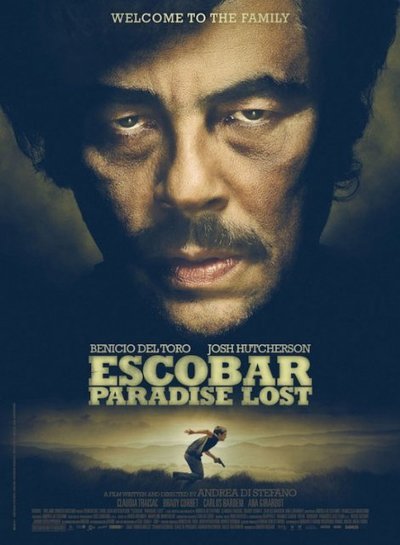