Terror thrives off spatial awareness—think about the house in “Hereditary,” the winding hallways in “The Shining,” and the cramped compartments of “Alien.” Emerson Moore’s “Escape the Field” makes a bold move and promptly falls on its face by cutting out that element, and sets its minimal horror in an ocean of corn. There's no way out, and any evil force could be out there, but there's also no consistency. Just a lot of corn. It's ambitious, but with such hand-holding dramatic direction and a dreary visual palette that never creates terror out of random corn stalks, it couldn’t be more dull. “Escape the Field” is a survival story, in that it’s later salvaged by notes to make it more like an “Escape Room” spin-off.

The first person to wake up in this mess is Sam (Jordan Claire Robbins), a nurse who finds a revolver in her hand. While Robbins’ performance takes some time to build a likable enough hero, at the beginning she helps introduce the movie’s usual style of obvious, nuance-less expressions that let relieve the viewer of any emotional work. This is carried over by other characters: denim dad Tyler (Theo Rossi), Afghanistan vet Ryan (a hulking Shane West, trying to get the Shea Whigham MVP Award), a schoolboy named Ethan (Julian Feder), a Pentagon employee named Denise (Elena Juatco), and a British woman named Cameron (Tahirah Sharif) who has glasses (remember that detail). None of these people know where they are, or what they’re supposed to with the objects they have been given, which include Sam's gun, a knife, matches, a compass, and more.

Now, starting a movie more or less in act two, literally dropping us into it as with this movie’s opening shot, has worked before for numerous B-movies, and even A-movies. But the characters of “Escape the Field” don’t have enough of their personalities for us to feel for them, or not roll our eyes when they suddenly break into a monologue about where they came from. Our surrogates here become another conceit, just like setting a closed-corners story in a cornfield, which itself is more of a way for someone (Cameron) to run straight into a wooden fence early on, or for her to lose her glasses (also Cameron). With this too-slim storytelling, made worse by stiff performances that volley bad dialogue, the movie doesn’t give you anyone to root for. You can’t even root much for the filmmakers, which is a bad spot to put your audience in.

It takes about 35 minutes for the story to introduce its larger conceit of being a puzzle story, (someone announces, “It’s a puzzle!”) but that hardly gives “Escape the Field” the sense of having good mechanics. The same goes for when it introduces a map as if there is some logic to these cornstalks, and a guide to what everyone should wake up to. The stranger, more monstrous elements of the story go unloved; a peek at a red-eyed, super-powered terror shows this story would fare better, or at least be memorable, by cutting loose.

When stuck with a movie as dire as this, you tend to find light in the goofier details. For one, the captors here are particularly overzealous with how they incorporate dinky clues and puzzles as if trying to pay homage to the two “Escape Room” movies but using a limited prop budget as an excuse. But even more so, the biggest troll of this movie is Jigsaw, and his favorite trick in the “Saw” movies—everyone here wakes up in a cornfield and is convinced that one of their corny captors is among them. Of course! Maybe that’s not as funny to you, but hey, it’s something. 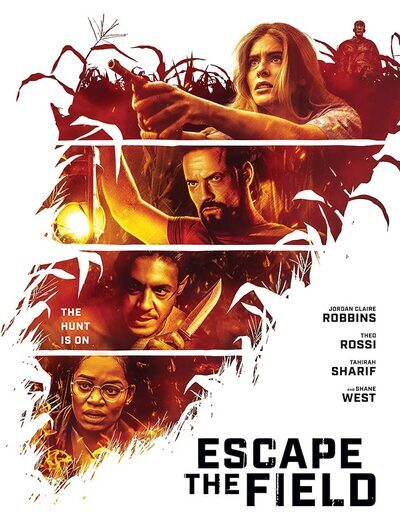