A little bit of trauma goes a long way in “Escape Room: Tournament of Champions,” a good enough sequel to the underwhelming horror thriller “Escape Room.” In “Escape Room,” a group of teenagers are abducted and forced to solve a chain of deadly logic puzzles. If they succeed, the surviving teens enter the next themed room (a bank lobby, a picturesque beach, a New York City side street), and hopefully advance to freedom. In “Escape Room: Tournament of Champions,” two of the previous movie’s players must complete a new series of escape room-style puzzles. The presence of this pair of former competitors—Zoey (Taylor Russell) and Ben (Logan Miller), both of whom survived the first “Escape Room”—immediately establishes this new movie’s emotional stakes, because nobody wants to relive the same nightmare twice.

Best of all, Zoey and Ben’s PTSD-like trauma is mostly processed through the escape rooms’ steadily escalating puzzles instead of their own pouty, leaden dialogue. Survival is everything to Zoey and her teammates, and when they do have enough time to out-think a puzzle, that extra wiggle room usually trips them up worse than any death-trap could. Compare that sort of rat-in-a-maze mentality with the inhuman and largely implied motives of the Minos Escape Rooms corporation, a generically clandestine organization whose members are blessedly never represented beyond a negligible prefatory flashback. By contrasting the movie’s resourceful adolescent contestants with their invisible tormentors, the makers of “Escape Room: Tournament of Champions” not only hit the ground running, but also set the stage for a sequel that’s almost as nasty as it needs to be.

Zoey and Ben’s respective motives are simple enough: she wants to find and punish whoever’s behind Minos’ escape rooms while he wants to repay her for saving his life in the last movie. They travel to Manhattan together, where they’re soon locked inside a booby-trapped Q train with three other escape room survivors. Hence the “Tournament of Champions” title, which is thankfully never dwelled upon. So Zoey and Ben team-up with a new group of survivors, each one of whom is just as on edge as they are. This leads to some appropriately melodramatic dialogue exchanges and a few impetuous judgment calls, like when alcoholic tough guy Nathan (Thomas Cocquerel) muscles his way through a laser-beam-protected escape room (designed to look like a bank’s lobby) even though he doesn’t understand the clues that will help him to find a safe path out of the room.

Eventually, Zoey and her friends try, and fail to get a step ahead of Minos’ games. Unfortunately, the game-players’ forward-thinking doesn’t necessarily guarantee their success since, more often than not, Minos’ reluctant contestants move or think slower than they need to. And if you miss a step, don’t stick together, or simply don’t move fast enough—you could die. The key word being “could” since not knowing what will happen next is also a good part of this movie’s tension. “Escape Room: Tournament of Champions” also moves so fast from one set piece to the next that it’s easy to forgive its filmmakers for mostly covering and therefore over-editing their footage. Still, moving at lightning speed has its benefits when you’re wading through a high-concept gauntlet that punishes you if you try to advance too quickly.

A clunky, but effectively mean rug-pull finale suggests that the “Escape Room” movies, like the “Saw” series before them, was always secretly about its characters. But the rest of “Escape Room: Tournament of Champions” presents human characters as manic, disposable game pieces. Sometimes, Zoey and her friends’ best efforts just aren’t good enough, and it shows in scenes where a door slams shut, or a ladder is withdrawn just before somebody can use it.

Smartly, not much time is wasted on reminding viewers just how threatening the movie’s death traps are—that’s what the death traps are for. More often than not, we watch as characters barrel through rooms with a resolve and anxiety-inducing speed that could probably only be done in a sequel, especially given contemporary genre filmmakers’ franchise-oriented mindset.

“Escape Room: Tournament of Champions” moves at an alarming pace, and that helps to establish just how impersonal many of the movie’s traps are. Human error—or uncertainty—is the biggest source of tension in this movie, and it goes a long way towards making this sequel (a little) more than the sum of its flashy parts. You may not need another “Escape Room,” but this new one is good enough to leave you wanting more.

Available in theaters on July 16. 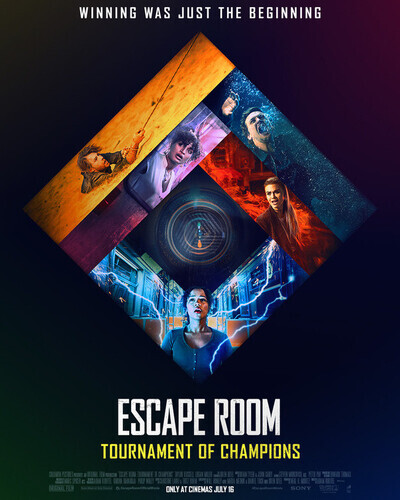