If personality were enough to carry a movie, "Escape Plan" would never touch the ground. In this film, action movie old dogs Sylvester Stallone and Arnold Schwarzenegger are relentlessly likeable, even when serving up plot and dialogue that would have been trampled on the writer's room floor of "Knight Rider" circa 1985.

Swedish genre director Mikael Hafstrom's delight at having life-sized Rambo and Terminator action figures to play with is palpable in this prison break flick. He covers their hushed conversations inside The Tomb, a seemingly inescapable prison fortress, in giant, lingering close-ups. We are not to miss a single flicker of chemistry that passes between these two longstanding human franchises.

Alright, the plot. Something about how Stallone's character, Ray Breslin, is the world's leading prison escape artist, hired to show correctional facilities their security weaknesses by breaking out of them. As negotiated by his boss (Vincent D'Onofrio), his latest assignment is to escape from what used to be called a "black site," an uncharted holding facility for criminals no government cares to bring to traditional justice. The Tomb is a place for the "disappeared" among terrorists, warlords and high-level gangsters.

The Tomb is also one of those profiteering private enterprises, like Blackwater (which is mentioned as a source for its security personnel),which thrives on doing dirty work for the powerful. The script's provocative political sentiment is that nations are irrelevant; bureaucracies like the CIA and the Bureau of Prisons exist only to front deals between what Noam Chomsky would call "unaccountable private tyrannies." Hobbs (Jim Caviezel), an immaculate, soft-spoken sophisticate (who would have been played by Anthony Perkins in another era), runs the show when he's not tending to his gorgeous butterfly collection.

Yeah, it's a mishmash of good, strange ideas and generic nonsense, barely held together by Sly and Arnie. Here are the odd glories:

4. A mini-"Grand Illusion" brotherhood plot thread involving Schwarzenegger's alliance with a Muslim prisoner who ultimately goes out in a heroic blaze of glory, in the name of Allah, in an American action film!

2. The possibility that Caviezel, whose spectral presence gave "The Thin Red Line" its soul and has always seemed more suited to play Pasolini's Christ than Mel Gibson's, is pretending he's in a mid-60's European art film.

1. Arnold's generally impish portrayal of the coolest OG in prison. To create a diversion for Sly to go skulking about the joint, Arnold rages inside his solitary 'hot box" cell, delivering aderanged monologue about evil and reciting the Lord's Prayer, all in mellifluous German. This spectacular performance within a performance suggests that Arnold could have taken over where Klaus Kinski left off.

That's about it. The rest is something you've seen lots of, if you were an action fan in the 1980's and '90s with a functioning VCR or cable box. The fight scenes are standard wrestling matches punctuated by impalements or broken necks. The gun battles are without style or suspense. Inconsistencies in plot, character and physics are sewn up with quick cuts and the same techno-thriller musical score that has accompanied every action film for the past 15 years.

Like the "Expendables" movies, "Escape Plan" squanders its opportunities for genuine nostalgia because, I suspect, its stars don't want to be remembered fondly for their old hits more than they want to show that they still got it, right here, right now.

They have no idea that we'd enjoy them bald, fat, winded after running up a short flight of stairs, playing with their grandchildren. We'd love to see these superheroes cop to age and vulnerability, to something more devastating than Vinnie Jones' right hook. 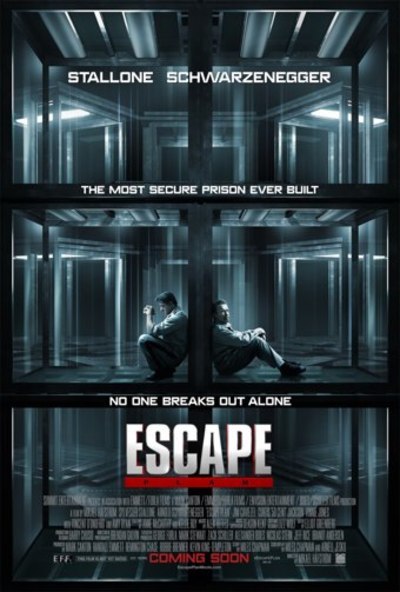