The debut feature from writer/director/star Amalia Ulman recalls the scrappy, low-budget look and feel of the movies that marked the indie film explosion of the early ‘90s, but its dialogue and details are unmistakably personal. Ulman, an Argentine-born artist, appears alongside her mom, Ale Ulman, making her charismatic on-screen debut. And while the duo’s financial dilemma often plays out in arch ways for laughs, the way they snipe at each other and regard one other with tenderness gives the film a grounding authenticity.

“El Planeta” takes place in the northern seaside city of Gijón, in the Asturias region of Spain, where Amalia Ulman grew up. Working with cinematographer Carlos Rigo, she paints a detached portrait of despair following Spain’s recent economic crisis. Characters casually walk past storefront after storefront that’s empty, boarded up or for lease. In the midst of this misery are would-be stylist Leo and her mother, Maria, who are on the verge of being evicted from their tiny apartment. They wear coats indoors to avoid turning on the heat, and when they can no longer afford to pay the electrical bill, Leo sits in the lighted stairwell to read a book.

But they’ve been feeling the pinch for a while, as evidenced by the minor-league hustling and thieving that mark their daily lives. The hilariously understated opening meeting between Leo and a man she discovered online (played by Spanish sci-fi/horror director Nacho Vigalondo) shows the extent to which she thinks she’s willing to go to make a buck, and the fact that Ulman shoots their conversation in a long, single take allows the absurdity of the humor to build steadily. In front of the camera, she has the striking, wide-eyed presence of a silent screen star, which she uses to express astonishment at the array of horrible men who get her hopes up and let her down over the course of the film. Everybody wants something from everyone else, including our impoverished heroines.

Trouble is, Leo and Maria had grown accustomed to a certain comfortable lifestyle, one they’re finding increasingly difficult to maintain following the death of the family’s patriarch. Maria tries to keep up appearances, wearing a full-length fur coat and carrying a Burberry bag to shoplift stuff she doesn’t need from the variety store. An elegant beauty, Ale Ulman calls to mind destitute and delusional princesses from Blanche DuBois to Michelle Pfeiffer in “French Exit.” And when she and Leo enjoy an expensive lunch at the restaurant that gives the film its title, she blithely tells the waitress to put it on the tab of a local politician Leo supposedly had dated. It’s a pathetic version of Fletch ordering a Bloody Mary and a steak sandwich (and a steak sandwich) at the club and charging it to the Underhills.

“If I keep eating carbs, I’m going to have a poor person’s body,” Leo whines. And while such superficiality might make these characters seem off-putting, they also reveal enough humanity and vulnerability to make us ultimately root for them to succeed. The fond way they bond over amusing memories of their mean, dead kitty as they cuddle for warmth in bed at night suggests this moment was pulled from their actual lives. And a final shoe-shopping trip at the mall is joyous in its normalcy, yet simultaneously heartbreaking because we know everything is about to collapse around them.

Because Ulman pulls off such a delicate tonal balance for the majority of “El Planeta,” it makes you wish she hadn’t relied so heavily on stylistic quirks. Intentionally cheesy wipes between scenes are a distraction, and the whimsically plinky score from Chicken feels at odds with the stripped-down simplicity of the visuals. Still, Ulman is taking risks, which is exciting, and it bodes well for the next depressing/amusing story she wants to tell. And hopefully she’ll let her mom tag along again, too.

Now playing in select theaters and expanding nationwide and on digital on October 8. 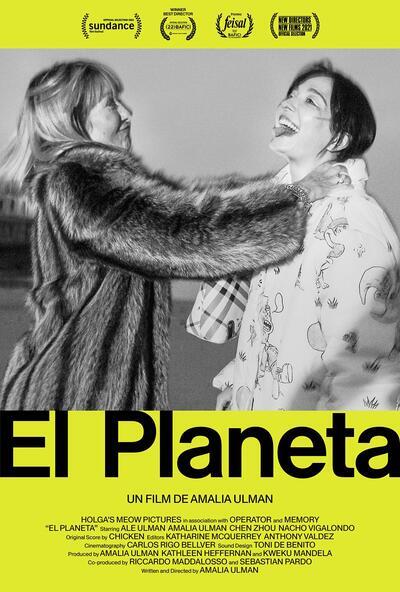