With a mop of golden curls and pouty lips, Carlos Robledo Puch (Lorenzo Ferro) looks more like a teenage heartthrob than the cold-blooded serial killer. In 1970s Argentina, the young criminal caught the attention of an adoring public that was fascinated, repulsed or possibly titillated by the idea of a hot young man capable of such heinous crimes. In his short illegal career, the real-life Robledo Puch committed at least 17 robberies, 11 murders and several counts of sexual assault and rape. Carlos’ looks, the public’s reaction, and his shocking young age are perhaps the most likely reasons why his story lives on.

In the cinematic adaptation of the true crime story, Carlos is a disaffected teenager living with his parents in Buenos Aires. They are a humble working class family teaching their only son the values of working hard and staying in school. He cares to do neither. Instead, Carlos starts his criminal career as a petty thief, sneaking into big mansions and helping himself to jewelry, cash and a motorcycle. His parents are on to his lies, but he’s just getting started.

After he befriends another handsome classmate, Ramón (Chino Darín), Carlos meets his first criminal mastermind and mentor, Ramón’s father, José (Daniel Fanego), who shares the boy’s taste in stolen goods. Carlos develops a possessive crush on Ramón, and the defiant teen pushes everyone’s boundaries to their disastrous conclusions. Carlos’ interest in stealing has never been about money, and his appetite soon outgrows Jose’s plans and Ramón’s rejections. Eventually, his crimes become so heinous, the media christens the young man, “The Angel of Death.”

Although the film’s premise is based on a true story, Luis Ortega’s “El Angel” is not a faithful biopic. Somehow, the facts are darker than their fictional counterparts. There’s also the matter that the director took the liberty of reimagining Carlos as a gay psychopathic killer although no official version of Carlos’ story hints at any queer identity. Although the film does dips into the old trope of a bloodthirsty queer villain, Ortega’s version plays it serious so that Carlos can pass as straight (for a time) in the homophobic underworld of ‘70s Argentina. However, the camera spends a lot of time close to Ferror’s face—so the audience can see Carlos’ longing, jealous gaze on the character’s solemn face—and it’s painfully obvious what Carlos wants to control the affections of another person. It’s something he can’t steal for himself.

Like Patrick Bateman in “American Psycho,” Carlos fools people around him with his charm and good looks. People just don’t suspect the worst of him, even when the movie is making his bad intentions visually obvious. Ferror’s performance is eerily hollow and effectively scary, almost as if you were looking at a shark head-on and seeing nothing reflected back; Carlos moves lithely through darkened homes and stores like he’s in his natural habitat. His “shoot first, ask questions later” approach gives him his first taste for blood by accident, and once he’s hooked, his regard for life diminishes rapidly.

“El Angel” recreates the look and feel of the ‘70s to an astonishing degree. Most of the bit players in the criminal world look scruffy and unkempt so much so that the fresh-faced student looks like an innocent source of light and energy in a room. Quickly, we see that is never the case, and where Carlos goes, death soon follows. The film has the appearance of velour: dark, warm tones that invariably make even the most mundane spaces so much more sensual and inviting. The settings draw in viewers with so many details in every scene, like when the pair are hiding out in grim, dimly lit motel or passing through a velvet cushioned club with judgmental bartenders. Ortega uses Spanish language rock and pop hits like Martin Scorsese did in “Goodfellas,” giving the audience a taste of the time and insight to the mindset of these men. From their point of view, they were untouchable rock stars—until they weren’t.

Although the central relationship between Carlos and Ramón is unsatisfying, the flourishes of lurid cinematography and an upbeat soundtrack give “El Angel” its main flavor. The life of crime Carlos pursues feels exciting and tempting under the light the movie shines on it. Even if you’re not familiar with Carlos’ story, the way Ortega has rewritten history teases us to keep watching in anticipation of each horrid act. Each terrible deed rewards the audience with a worse response, hooking viewers in and keeping their attention hostage.

However, the emptiness in Carlos’ eyes can only takes the movie so far. Eventually, the character's eerie coldness leaves the movie feeling shallow, and the violence and queer themes are more for shock and titillation than any kind of reason or commentary. It’s a hell of a story—spruced up and splashed on a big, colorful screen—with a lot to show but little to say. 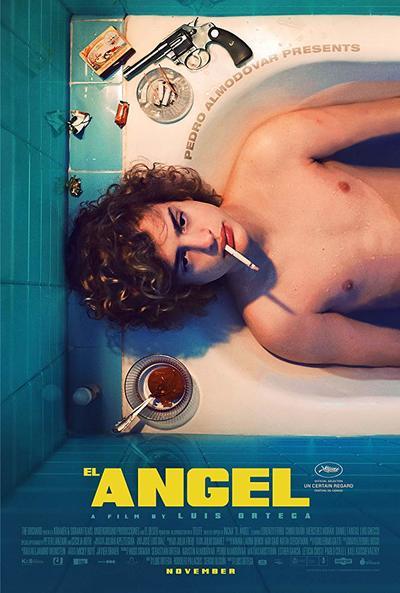